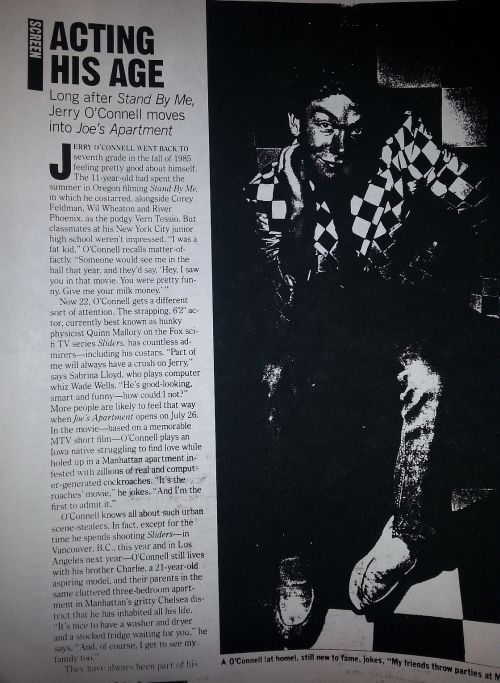 People Magazine, Dan Jewel, July 15, 1996 — Jerry O’Connell went back to seventh grade in the fall of 1985 feeling pretty good about himself.

The 11-year-old had spent the summer in Oregon filming Stand By Me, in which he costarred, alongside Corey Feldman, Wil Wheaton and River Phoenix, as the pudgy Vern Tessio.

But classmates at his New York City junior high school weren’t impressed. “I was a fat kid,” O’Connell recalls matter-of-factly. “Someone would see me in the hall that year, and they’d say, ‘Hey, I saw you in that movie. You were pretty funny. Give me your milk money.'”

Now 22, O’Connell gets a different sort of attention. The strapping, 6’2″ actor, currently best known as hunky physicist Quinn Mallory on the Fox sci-fi TV series Sliders, has countless admirers — including his costars.

“Part of me will always have a crush on Jerry,” says Sabrina Lloyd, who plays computer whiz Wade Wells. “He’s good-looking, smart and funny — how could I not?”

More people are likely to feel that way when Joe’s Apartment opens on July 26. In the movie — based on a memorable MTV short film—O’Connell plays an Iowa native struggling to find love while holed up in a Manhattan apartment infested with zillions of real and computer-generated cockroaches. “It’s the roaches’ movie,” he jokes. “And I’m the first to admit it.”

O’Connell knows all about such urban scene-stealers. In fact, except for the time he spends shooting Sliders—in Vancouver, B.C., this year and in Los Angeles next year — O’Connell still lives with his brother Charlie, a 21-year-old aspiring model, and their parents in the same cluttered three-bedroom apartment in Manhattan’s gritty Chelsea district that he has inhabited all his life.

“It’s nice to have a washer and dryer and a stocked fridge waiting for you,” he says. “And, of course, I get to see my family too.”

They have always been part of his show-business dreams. With the encouragement of his father, Michael, an ad-agency art director (now retired), and his mother, Linda, who teaches art in two Jersey City, N.J., high schools, O’Connell began studying drama, gymnastics, dance, piano and fencing when he was 6. Even at that age, he says, “I knew I wanted to work in entertainment.”

O’Connell’s parents took him to an agent when he was 10 — and he soon landed the perfect gig for a chunky pre-adolescent: stuffing himself full of Duncan Hines cookies in a TV ad. “I had to eat 4,000 cookies in three days,” he says. “I remember thinking, ‘Wow! I’m eating all these cookies and I’m getting paid!'”

Soon after, he went to an open casting call for Stand By Me in New York City. He wasn’t nervous, he says, because “I was really fortunate to have parents whose lives didn’t revolve around their child’s career.”

Indeed, both parents stress that his education always came first. Missing school “wasn’t even an option,” says Linda. And so O’Connell — whose baby fat “just kinda stretched out” with a growth spurt around age 12 — entered Manhattan’s Professional Children’s School in 1987, then majored in film and television at New York University.

Though he starred in the occasional TV movie and series, he began to act full-time only after he graduated in 1995, the year he won the Sliders role.

O’Connell, who is currently shooting Jerry Maguire, a comedy in which he plays a cocky NFL quarterback with Tom Cruise as his agent, is modest about being a fledgling movie star.

Told that his Sliders costar Lloyd has confessed to a crush on him, he laughs and says jokingly, “Now that I know Sabrina feels that way, I won’t be be so chicken [about asking her out].”

He has no main squeeze, he says, though he has had a few dates recently with a woman he identifies only as a “pretty” New York City lawyer. Otherwise, he loves to take in a Yankee game or “just hang out at the local greasy spoon” with friends, he says.

The latter activity may have been good training for Joe’s Apartment. Despite the computer tricks, not all of the vermin in the movie are virtual. In one scene, O’Connell sits down to a bowl of cereal and accidentally spoons himself a few of his six-legged buddies.

“They were using rubber ones,” he recalls. “Then one of the crew yelled, ‘Use the real ones! What’re you, chicken?’ ” The taunting worked, and O’Connell opened wide.

For the few seconds before he spit them out, he says, “I could feel their antennae on the roof of my mouth. It was kinda gross—but these are highbred, clean-living, Hollywood roaches. They weren’t exactly pulling them out of the subway!”

As a New Yorker, of course, he’d know the difference.