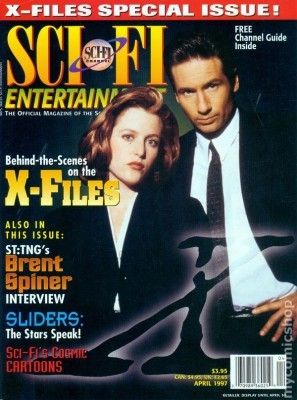 If you have been checking out Sliders this season, you will immediately note that Executive Producer Alan Barnette’s vision of inserting more complex special effects into the show has been realized. Our involuntary wanderers have faced robotic spiders, giant dragons, an intelligent flame, dream-invading nerds, tornado-infested deserts, automatons that render humans obsolete, and a giant scarab beetle. The man responsible for creating the third season’s mind-numbing visuals is the show’s visual effects supervisor, Ken Stranahan. Stranahan’s history includes credits on Hercules: The Legendary Journeys, Star Trek: The Next Generation, Space: Above and Beyond and Nash Bridges.

Originally schooled in traditional painting and artwork, Stranahan, an avid furniture designer, found his true calling thanks to his brother’s influence. ‘While [I was] working in Springfield, Massachusetts, my brother introduced me to computer animation. When he showed me the stuff he was working on I was blown away. So I bought a computer and started to learn the stuff. When I was ready, six years ago, I moved out to LA and worked on the pilot of seaQuest. I modeled the hammerhead in Space Above and Beyond, the EVA suites in SeaQuest, and did a lot of the high-end organic stuff. I worked on the water women in Hercules and on the hydra creature with Don Weller. I got into Sliders when I was working at SeaQuest. I hooked up with John Gross and John Prento who later started their own company, Digital Muse. When they were asked to do a couple of Sliders shows, I was part of the animation team. They gave Don and me the allosaurus episode, the one in which Cleavant had a close shave with our 3-D model dinosaur. I actually modeled and textured the creature and Don did the animation. We worked in Don’s kitchen for about a month to put that together. So now I work for Digital Muse, the company that just did the Titanic mini-series. There are now 20 of us located at the Third Street Promenade.”

Our quartet of involuntary travelers also appreciated this season’s more special effects. “One of the things I really enjoy about Sliders is the neat special effects,” says Jerry O’Connell, a giant smile beaming across his face. “Because I went to film school, I find this stuff all very interesting. To see a special effect carried out firsthand, and to actually see what I have been studying for the last four years come to life, is a real treat for me. I love it and it keeps things exciting. Also to see the explosions and stuff is really fun. But it is the CGIs [computer-generated-images] that are attractive, and how they are all put together. Recently we did this show where a fire creature had its own intelligence. We were all staring at what was supposed to be a huge fire, when it was just these huge lights putting a fire pattern on our faces. Then you see it all cut together, and we are actually standing amidst a huge fire. It is surprising when you look at it from that sense.”

“I wish we had more money to do more special effects,” comments Cleavant Derricks. “We have to cut corners. When we were in Vancouver, we would slide by coming in say with a shot from up at the top of a tree, and as we were sliding in with the special effects, we were on a wire, so then we would land and roll, acting like we just came out of this vortex. It was just this whole big set-up. Although we are back in LA and the budgets are higher, filming is more expensive, so we still don’t get the kinds of real special effects we would love to do.” Then with a smile, “But I do remember that dinosaur thing.”

Sabrina Lloyd quickly quips “Acting like nothing is there was initially a little bit of a challenge, but I guess that is where all your training comes in. Now you don’t think about it as much anymore.” She jokingly yells, “Okay, one more time, jump into the air,” and giggles.

John Rhys-Davies adds, “Let me tell you, it can certainly wrong-foot you, terribly (a roar of laughter), as you act to fill in a description and find in the end the description doesn’t match what they have laid in. Although, by in large, I am personally increasingly wary and skeptical of CGI, but if you are prepared to do it properly and invest the money, you can indeed get extraordinary results. The main problem is, if the special effect is your main virtue you might be setting yourself up for failure unless you are prepared to match that every week.”

Stranahan continues, “I have only been the visual effects supervisor on Sliders for two months. Sarah Johnstone works with me as the visual effects coordinator. This is fairly new. I took over from Mark Kochinsky who I worked with a lot at Encore Visual Effects. Since doing the allosaurus, we recently did the flying dragon [the one Quinn slew with a sword]. Don and I did the modeling and texturing the animation was done by Steve Carpenter. A lot of what I am doing is the supervising, so for now I am only doing about 25 percent of the actual animation, but luckily at Digital Muse we have some great animators.”

For the third season’s premiere, three mechanical robot spiders, fangs bristling with deadly electricity, menacingly scurry down a metal web toward Rembrandt. The spiders were designed and modeled by John Daniel and animated by David Lombardi. Brad Hayes not only created the killer tornado that ravaged one of the dimensional Earths but he also created the flitting intelligent flame that could eventually speak to Quinn. The futuristic Golden Gate Bridge and the bullet train that travels through it, which gave Rembrandt the ride of his life, was designed, modeled, and animated by Larry Bowman.

But Stranahan’s greatest challenge will be a special treasure effect slated for later in the season the creation of a Volkswagen-sized scarab beetle, for an episode o be directed by Adam Nimoy. Stranahan comments, “Adam really wanted to make this a great show. We basically built a giant CGI scarab beetle. Luckily one of our animators actually studied entomology in school. I must apologize for some of the artistic license we took. Originally it was very accurate looking, then the claws on the front were not big enough so we ended up changing a lot of things. But it should still look pretty cool. It is really top notch and we put a lot of time into it. I ended up modeling the bug, but John worked hard on trying to make it a great looking bug. It is really amazing.”

And what about the most frequent effect, the ever-important sliding vortex that is slightly reminiscent of the time traveling vortex from Bill and Ted’s Excellent Adventure and the wormhole from Star Trek: Deep Space Nine. Stranahan comments, “Brandon Smith is the man behind the numerous vortex elements that are the backbone of the series. We have been experimenting with a couple of things and have sort of changed it in the plot line so it might get a slightly different look. There is always another interesting way of having it open up as opposed to just having them jumping out of it onto the street. But overall, although our technology gets better and our whole system is more refined, essentially it still all comes down to our creativity.”