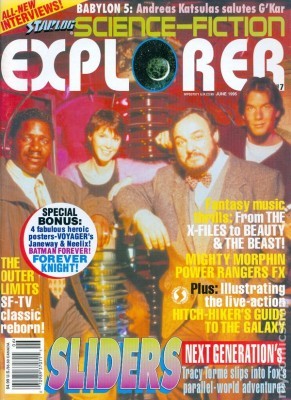 When Tracy Tormé cites his top three favorite SF-TV of all time, his reverence for writer dominated shows is clear. For Tormé, The Outer Limits (1963-65), The Twilight Zone (1959-65) and The Prisoner (1969-69) all represent the zenith of SF-TV.

“The Outer Limits is a completely unique show. The depth of it, the way it’s shot, the writing, the somber tone. I just think it’s way, way ahead of its time. It’s just different,” says Tormé. “I think the reason I like Outer Limits so much is I like reality-based science-fiction. Science fiction gets off reality [and] into fantasy. The Outer Limits, even with the silly monsters, was very serious. I like SF because it is an arena to do stories that are fresh for me, as long as there’s reality to the environment.”

With an Outer Limits revival scrambling TV sets once again, Tormé offers his views on the possibilities.

“I think it can be done again. I think it’s going to be very interesting to see.” Tormé’s optimism for an Outer Limits remake stems from the fact that he was once involved with original series co-creator Joseph Stefano in one of several earlier revival attempts.

They weren’t able to get all the parties to agree to anything. I was contacted about being a potential writer on the new show, but I knew my schedule wouldn’t allow that.”

Tormé has very specific views on what it will take for the new series to measure up to the original. “What I think The Outer Limits should try to do, and I hope they’ll do this, is realize what made The Outer Limits special. It was the dark, cynical, heartfelt view of the world that The Outer Limits had. And they really need to recapture that. If they don’t it’s just going to be another anthology show. It’s quite a challenge for them. I hope they pull it off.”

As for The Twilight Zone, Tormé wasn’t overly satisfied by its 1980s series revival. “One of the problems of doing Twilight Zone that they forgot, which made the Twilight Zone so famous, were the twist endings. That made the show. If you look at all the best episodes of the original show, they all have some turn at the end that makes you say ‘Wow!’ The new show didn’t have that. They tended to do straightforward stories.”

A longtime SF fan while growing up, Tormé’s now creating his own realities with Sliders and Dark City. He has specific rules in his mind that make for successful SF-TV.

“The best thing to do is create a reality within the show that is consistent and is never broken,” surmises Tormé. “Star Trek did a good job with that. Here’s what the ship can and cannot do and here are the enemies, their strengths and weaknesses. Here are the rules of the Federation. The Prisoner also did that.

“That’s the key. Set clear guidelines that are interesting to people so when they watch it, they’ll get drawn into that world and it will have a sense of reality for them. That way they’ll care. They’ll care whether characters live or die. They’ll care what’s happening. All the best fiction, in any form — books, movies or TV — occurs when the characters have a total life of their own. They become as real as people to the writers, the actors, the fans and the viewers. When that happens, you’ve crossed the line and you’ve created something tremendously successful and worthwhile. That, to me, is the best form of art in show business.”

The crux of creating successful SF-TV, and many have failed in this, says Tormé, is that “the more fantastic the premise, the more the need to ground it in reality. Believing that what I’m watching is real and forgetting for a moment that it’s a TV show with fictional situations. That’s the magic part of why I’m in the business at all. There’s nothing else like that where fantasy and reality merge.”

Towards this definition, Tormé sketches his views of some past and present SF-TV. But he prefaces his comments to explain that he doesn’t watch television very much and the following reviews only come from occasional sightings.

“This is a very unusual thing with me,” admits Tormé. “I don’t want to be too influenced by them. I’ve never seen Quantum Leap or the last two Back to the Futures and I’ve never seen a Tales from the Darkside or RoboCop the series.”

Tormé’s cautionary stance is a pragmatic, protectionist attitude because “I don’t want to see something and then have it creep into my mind later in a story [I might write] and not know where it comes from.

“X-Files is a very good show. I like what I’ve seen,” but Babylon 5 brings another view. “I’ve really only seen part of one episode. What did strike me is that the creator was constantly criticizing Star Trek, I thought it was very ironic when I saw it, that it seemed to me that he was trying to do Star Trek again but not well. That’s what I found amusing. He seemed to be falling into many of the same traps that he was complaining about. That’s my initial impression.”

As for Deep Space Nine, “They sent me the bible and asked if I wanted to write for it. I’ve never seen it.”

And Tormé adds, “I think seaQuest is pretty pathetic. It’s the most politically correct show I’ve ever seen.”

He also has harsh words for Battlestar Galactica, a series he believes didn’t follow his key to successful SF-TV. “It was a very cheesy show. It was silly, basically. Even Star Wars — and I’m not a Star Wars fan — was brilliant technically and I found it entertaining in some extent. I get really bored when the good guys can’t ever miss and the bad guys can shoot a thousand times while you’re five feet away and never hit you. I always know who’s going to win and who’s going to lose and the lines are so black and white. Battlestar Galactica was just a pale imitation of Star Wars.

“On the other hand, with the first two ALIEN movies, and I specify the first two only, I am on the edge of my seat. I don’t know who’s going to win or die or what’s going to happen next. I’ve never been a fan of the sword-and-sorcery SF or the Buck Rogers just-completely-comic book SF.”

And Tracy Tormé chuckles, “If Sliders or Dark City doesn’t sell, you can disregard all these opinions.”