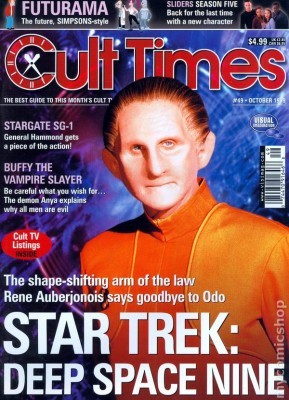 It was always intended to be the final year. By the end of its fourth season, Sliders had clocked up 70 episodes; a respectable figure certainly, but not quite enough to form a comprehensive package for sales in syndication. Hence, during the summer of 1998, the eleventh-hour decision to commission 18 new episodes.

For the producer/writing team, Bill Dial, David Peckinpah, Keith Damron and Chris Black, this was both good news and bad news. The contracts on their leading players — Jerry O’Connell (Quinn), Charlie O’Connell (Colin), Cleavant Derricks (Rembrandt) and Kari Wuhrer (Maggie) — had all expired. With 10 weeks to go until shooting began, they discovered that Jerry O’Connell was now committed elsewhere and attempts were made to secure him for at least part of the season. After some delay, Dial and his team learned the worst: neither of the O’Connell’s would return for the fifth season.

As the start of filming loomed ever closer, they were faced with the impossible task of replacing the one character who, for viewers, represented the main focus of the series. The solution, believe it or not, came from Doctor Who. Taking the Time Lord’s example, Dial elected to re-cast the role but change the character. However, this would be no physical regeneration; instead, Quinn’s dramatic change would be the result of a disaster within the sliding vortex and would serve to introduce a new regular villain to the show, Dr. Oberon Geiger. This, in turn, led to the introduction of a second new Slider, Dr. Geiger’s naïve assistant. Originally called Jill Clayton, the character would eventually be known as Diana Davis.

Selecting an actor to portray the new Quinn — originally called Quinn 2, then Michael, and finally just Mallory — was key to the success of the entire series. The producers auditioned dozens of young hopefuls, until they settled upon talented newcomer Robert Floyd, who captures the essence of O’Connell’s performance, while creating an entirely different, more streetwise individual.

“He’s a good looking leading man type,” Dial tells Cult Times. “He’s a little more street than Jerry’s character was. In one show we did he had to steal a jewel out of a jewelry store, and Rembrandt is saying, ‘This is crazy… we’re talking about breaking and entering! What do you know about robbing jewelry stores anyway?’ Robert says, ‘Well, actually…’ And Rembrandt says, ‘I don’t wanna hear it!’ There are all these little shady things that we learn about his as we go along.”

The story goes like this: in an alternate universe, Mallory is a lab rat. In fact, some time in his past he was physically disabled — until he met Dr. Geiger…

“Originally he cured me,” explains Floyd. “I had no reason not to believe him — as far as I know this is the guy who made me walk again. I owe him everything, he’s almost a father figure, and then there’s this huge betrayal.”

Sent into the vortex by Dr. Geiger, his body collides with two of our Sliders. Colin becomes ‘unstuck,’ lost in the vortex. Quinn is melded with his own duplicate, much to the horror of Rembrandt and Maggie, who must accept that somewhere inside this stranger is their old friend. By episode two, Applied Physics, this duality becomes a threat to Mallory’s life — which in turn demands some kind of closure.

“Eventually Quinn starts to be buried,” says Floyd. “But I do keep a lot of his strength that he had in the episodes before. That part stays with Mallory and I don’t think he ever had that before.”

Whereas, in the past, Quinn would explain the show’s science, this role would now be transferred to Diana.

“We had to decide who these people were going to be and how we would fold them into the show,” Dial continues. “I think we found an interesting Science Fiction way to put Robert into the show in the first episode, and Tembi’s character is in the same story as a science officer. Jerry O’Connell fulfilled that role before, and we needed somebody to explain quantum physics.”

In the initial scheme of things, Diana was to be a wolf in the fold. As she teams up with the Sliders in the hope of eventually ‘unmelding’ Mallory and Quinn, the producers originally intended that the scientist would have another agenda of her own. Still fiercely loyal to Dr. Geiger, she would betray her friends in order to save her mentor.

Sadly, by the time the two-part opening story was written, the idea was dropped. The producers deemed that the series already had too many continuing strands, some of which had been inherited from previous seasons, and the weight of Diana’s betrayal was just too much for one 18-episode season to bear.

Instead, the chief source of villainy would have to be Geiger himself. A brilliant quantum physicist, Geiger has accidentally eradicated all of his own alternates on the parallel worlds.

“We had this idea of a physicist trying for world domination on a quantum particle level,” explains Dial. “He’s unstuck. Basically he’s been fiddling around with some quantum force that has kind of unglued him from dimensions — he can’t stick in one dimension. He manages to put together a force field that contains him, but what he’s trying to do is create a universe that he can live in.”

The only way for Geiger to achieve this aim is to destroy the multiverse, so that only one Earth remains. To play this most evil of men, Dial chose Peter Jurasik, best known to genre fans as Babylon 5‘s Centauri ambassador Londo Mollari.

“He is so funny,” enthuses Floyd. “He is such a riot. A wonderful actor and always so professional, so ‘on’ all the time, but a great sense of humor. He was on the first episode I did and it was nice to work with a more seasoned actor in the TV realm. He was very encouraging, and a wonderful man.”

“We’ve been lucky in getting excellent guest characters considering we don’t have the budget that most network shows have,” concludes Dial.

Even taking into account the reduced pre-production time that resulted from re-casting the leads, the fifth season of Sliders was no easy ride. With just six shooting days allowed to each episode, Dial and his team were compelled to generate a new script almost every week. And with four years worth of stories already in the bag, discovering new ideas must have been a considerable challenge.

“We have a very small writing staff compared to most other television shows,” Dial explains. “We started out this season just trying to come up with an overall arc of where we wanted to go in the course of 18 stories. The story process really can start from anything. David came in one day and said, ‘I see Kari in tight leathers with motorcycles… now go with it.’ We ended up writing a show called Easy Slider.

“We also tried to think up a musical idea because Cleavant is a Broadway musical star, so we’ve done a musical. This year we’ve also done Saving Private Ryan — a war story.”

“Strangers and Comrades is phenomenal,” continues Floyd, discussing that episode in which the Sliders become embroiled in a trench war between humans and Kromaggs. “It has great battle scenes and it’s a really wonderful episode.

“There are some good stories; really edge of the seat, nail-biting, great action, special effects and explosions… you don’t know what’s going to happen. It’s really neat. It seems like they budgeted properly for those shows.”

Dial’s extra responsibilities meant that he would have less time available to write his own scripts for the show. During the fourth season he penned four stories, including the brilliant Roads Taken, in which Quinn and Maggie fell in love in a ‘bubble universe’ and spent a whole lifetime together.

“I didn’t do as many originals this year because I found I did a lot of the rewriting,” he admits. “I didn’t have the chance to do many new ones. I did the jewel theft once, and I wrote the first one. The first one we all have story credit on, because all four of us worked out the story, and I wrote the teleplay. It’s kind of luck of the draw. On a couple of occasions we bought stories off people and wrote them in house. It’s catch as catch can. Once it starts shooting, it’s a snowball — this is a machine that eats 50 pages every six days, and it’s kinda hairy.”

One script — New Gods for Old — was, in fact, a leftover from Season Four. Originally written by SF veteran David Gerrold as a vehicle for Colin, the story was dropped when that season became focused primarily on the Kromagg invasion of the multiverse. While that arc is revisited in Season Five, it has less of an emphasis, and Dial believed that Gerrold’s script could easily be adapted to fit the character of Mallory. In fact, in some ways this worked to the episode’s advantage, as it confronts how the character copes with sudden paralysis. For Mallory, this allows past ghosts to resurface, as he reverts to the infirm state he endured before Geiger’s intervention.

Asked if he had ever been tempted to submit his own ideas for the series, Floyd laughs.

“Occasionally I’ll think of some,” he says. “But as far as being a writer, I just feel blessed that I know I’m quite awful at it! I really have no desire to direct or produce, so just enjoy the process of acting.”

Given the difficult circumstances, one could almost forgive the fifth season of Sliders had it been a complete disaster. Yet in many respects the loss of the O’Connells ultimately served the show, inspiring an intriguing new story arc and injecting some new blood. While the group of Sliders remains very much a family, now they show more signs of being dysfunctional.

“There definitely is a tension in the sense that I am not completely comfortable with everybody,” explains Floyd. “The most comfortable I am is with Diana. We were both from the same world, we didn’t have a close relationship there but we knew each other.

“Rembrandt is teaching me as we go along. Sometimes I’ll be doing something and I’ll look back and he’ll be giving that shake of the head just like a dad.”

Would Floyd describe their relationship as that of a father and son?

“Almost, but if I say that to Cleavant, he’ll hit me!” he laughs. “It’s more like an older brother/younger brother! With Maggie, I think Mallory just finds her really amazingly beautiful but at the same time she keeps him in line every step of the way. So he looks in other worlds for his girlfriends.”

In April 1999, the family broke up for the final time. Sliders has always lead a charmed life — surviving through three turbulent years with the Fox Network before finding a more receptive home with the Sci-Fi Channel — but now, it seems, that luck has run out.

The saga ends with The Seer, a cliffhanger episode which guest stars Roy Dotrice. The resolution to that story may never be made. Unless, of course, in some parallel universe, Sliders Season Six is already in production…