Born For The Role 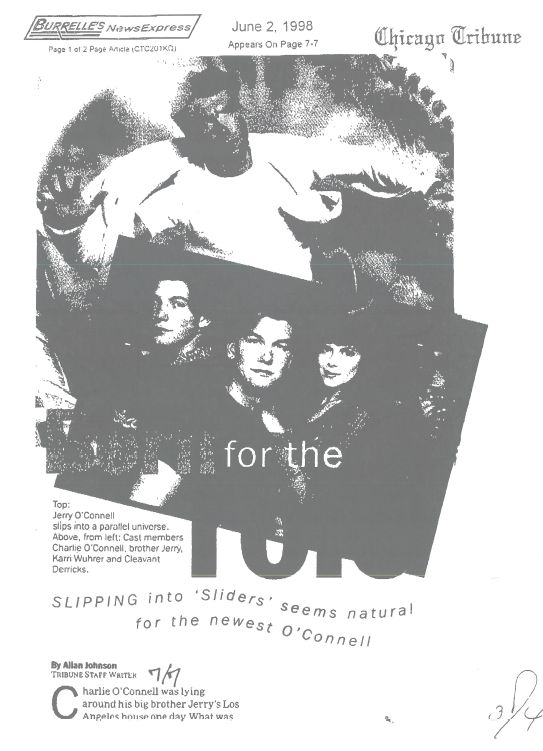 Chicago Tribune, Allan Johnson, June 2, 1998 — Charlie O’Connell was lying around his big brother Jerry’s Los Angeles house one day. What was supposed to be a short visit had stretched into six months. “I was like, `Listen, you either get a job or you get out of here,’ ” Jerry remembers.

And that’s how Charlie wound up on his brother’s television series, Sliders, which starts its fourth season Monday on the Sci-Fi Channel. Or at least that’s the story Jerry tells KidNews in a phone interview.

But wait, Charlie is on the line too. And according to him, there’s more to this story. Charlie, who at 25 is a year older than Jerry, was in L.A. trying to get acting roles with little success.

At the same time, producers wanted Jerry’s character, Quinn Mallory — the hotshot inventor who created the gadget that opens tunnels where you can “slide” from one alternative Earth to another — to have a brother he never knew he had, raised on a world that isn’t as advanced as ours.

(Alternative Earths have such differences as dinosaurs that still live or people who perform magic.)

But Charlie, who has acted and modeled for years, didn’t want it to look like he couldn’t get a gig without his brother’s help. So he went to several auditions wearing a “fake mustache and hat.”

Charlie says after he won the role of Quinn’s brother, “I took off my fake mustache and my hat and I revealed that I was actually Jerry’s brother. And nobody guessed.”

Jerry says something to suggest that maybe he knew a little about Charlie’s scam: “Why go out and cast a brother, when I’ve got an unemployed brother, a real-life brother, sitting on my couch at home who’s a drama major, who’s a great actor?” (Charlie went to New York University’s School of Drama; Jerry majored in film and TV there.)

So Charlie and Jerry are now sliding together on Sliders, which came on the Fox network in March 1995 before Sci-Fi snatched it up.

Since Quinn’s brother, Colin, isn’t hip to modern technology, it’s funny to see him react to something like a truck, for instance. But Colin is a quick study, say the brothers. Here’s how they explain it:

Charlie: “As the show goes on, I progress into a much stronger character, as opposed to naive.”

Jerry: “That was pretty much inevitable, Charlie. I mean, you’re a pretty slick guy. You couldn’t be playing the Amish dude for too long -”

Charlie: “I started as the Amish comedy relief. But by the end of it I was the hot male guy on the show.”

Charlie: “And my brother was the comedy relief!”