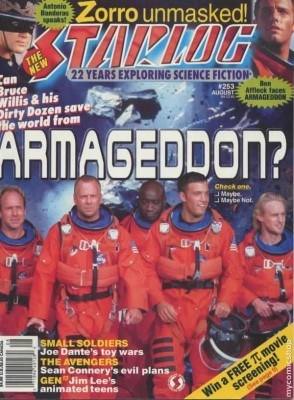 Kari Wuhrer can’t sit still during her hiatus. She has been known to climb the walls if there’s no work to be had, and right now that’s exactly what she feels like doing.

“It’s totally insane,” laughs the actress with more than a touch of exasperation. “Usually, I’ll have five or six jobs lined up. I can’t believe I have nothing going on.”

In a sense, Wuhrer should be grateful for the peace and quiet. As Captain Maggie Beckett, the slightly more senior of the two new Sliders cast members, Wuhrer has just completed filming the inaugural season of the show’s Sci-Fi incarnation (now airing). And that has included some grueling moments.

“There were days when I literally had to drag myself off the set,” she admits. “There were easy days, but it sure seemed like there were a lot of tough days as well.”

Wuhrer got the call to slide mid-way through the series’ final season on Fox. A science fiction fan, and an occasional Sliders viewer to boot, she was eager to play Beckett in a three-episode excursion into the Sliders Universe. “All they would guarantee me was three episodes,” Wuhrer recalls, “but they kept saying that the character had the potential to turn into a series regular. I didn’t know if they were blowing smoke or
not, but I liked the idea of working on the show.”

She arrived on a somewhat turbulent set. Considering its long run of inconsistent ratings, behind-the-scenes creative squabbles and character shuffles, Wuhrer went into Sliders cautiously. “But from that first day,” she adds, “I saw that the chemistry between Jerry O’Connell, Cleavant Derricks and myself was really great. And I liked the idea that Maggie was this kind of tough military character that I have never played before.

The candid actress concedes that her three initial Sliders adventures were not her finest acting hours. “The first few episodes were really tough, because I really could not define Maggie. It was a character I had never done before, so I just jumped in. I made some mistakes and was a little inconsistent at first. But by the third episode, I felt I had the character of Maggie down as cold as I could in such a short period of time.”

The producers of Sliders were quite happy with her. Wuhrer felt at the time “I had done a good enough job that they’d keep me on the show.” An additional Beckett episode was added while Wuhrer and the producers renegotiated her contract to make her a series regular. “My initial reaction was ‘Great’. I knew I had the best job ever. All I could do was hope the show would stay on the air.”

Then, Fox decided to cancel Sliders. “It was all about politics and money,” speculates Wuhrer on the network’s decision. “In many ways it didn’t make sense. I mean Sliders in that last year had higher ratings than Millennium and they kept that on. It didn’t bother me too much when Fox dropped us. I’ve been on shows that have been cancelled before. If a show I’m on gets picked up, that’s when I’m surprised.”

Fortunately, the Sci-Fi Channel stepped in to save Sliders — but at a price. The budgets would be smaller, diminishing special effects and action elements while reducing location shooting. Wuhrer looks favorably on the changes. “It had been a letdown when Fox didn’t pick us up, but we were all jazzed when the Sci-Fi Channel did. The initial reaction was that the new shows would become more intimate and that we would get to the heart of these characters, because we wouldn’t have the budget for us to be dealing with effects or running away from scary things every week.”

But all those positives aside, Wuhrer remembers things being tense when the three surviving Sliders convened on the Universal Studios soundstages that first day. “We were no longer on Fox and we hadn’t really met anybody from the Sci-Fi Channel, so Jerry, Cleavant and I were a little tentative. We had lost another cast member during hiatus (Sabrina Lloyd) and so now there were just the three of us. But we were encouraged when the first few scripts were so much more intimate. We really got to know each other and to deal with emotional and human issues. It’s a great way to start the season, we did some really good work and it was very inspiring for us.”

Wuhrer found the new facets of Beckett quite challenging in those early outings. “I had gotten the tough side of Maggie down, and suddenly they wanted me to have an emotional side too. Keeping Maggie in perspective while I was attempting to add a human side to her was hard to do at first and was particularly draining.”

Especially when she realized that she was having to leave herself, emotionally, at the studio gates each day. “I’m way more vulnerable than Maggie, so I have to check myself at the door. Maggie was tough, but now there was her emerging humanity to deal with. With all that going on, there was hardly room in the middle for myself.”

Wuhrer at that point, was quite content with the idea of having only three Sliders on hand. And she makes no bones about the fact that she was concerned when it was announced that Charlie O’Connell would join the cast as Quinn’s brother Colin Mallory. “I was concerned that the show’s dynamic was going to change. And it has. The show started becoming more physical than it had been in those first six episodes, but fortunately we never lost what we had gained in terms of humanity and emotion.

“Maggie is very much a new character,” Wuhrer says. “She has lost everything; her husband, her world, but the idea of sliding has kept her going. We’re seeing the tough side but we’re also seeing the sensitive side. There’s a little something in just about every episode that shows how much she really cares about the guys.”

“We’ve done this episode where Maggie meets her husband Steve in another dimension, and she goes through many things with him that she never did before. It was a tough episode for me because we get to see a lot of Maggie’s pain. It has been difficult for her. We also did an episode about a chasm of despair which can create this horrible depression in anyone who gets too close, and of course, Maggie gets too close. So I spent an entire episode crying my eyes out. It was horrible, I couldn’t wait for that show to be over.”

And if you’re looking for any kind of redemption for Beckett at the new season’s conclusion, forget it. “Something happens in the final episode that is a cause for celebration for everyone but Maggie. So we end the season with Maggie in a real emotional lurch.”

Wuhrer laughs at the possibility of Beckett developing a romance with a fellow Slider. “I’m waiting! Believe me, I’m waiting! We do see some indications that Quinn and Maggie are struggling to develop a deeper relationship. But it’s just bits and pieces because there’s really no time for romance when you’re sliding.”

There also wasn’t much time for romance in Wuhrer’s other genre hit, the giant snake flick Anaconda. She does remember that it didn’t start off as a promising film. “The script was really bad but the cast was so great that I figured the producers had to have something up their sleeves. I’ve done a lot of bad movies, but I liked the idea of going to the Amazon. I knew there were going to be rewrites, and that I would get to put in my two cents, so I said ‘Why Not?'”

She was a little less-excited with her character’s ultimate fate. “It was a B movie, and I was playing a B-movie character, so I did the best with it that I could. I had a lot more scenes but they had to be cut to make room for the monster. That’s show biz.”

Wuhrer was born and raised in Brookfield, Connecticut. “I grew up with a very science fiction state of mind, I was always interested in UFO’s, other dimensions and black holes. My father used to joke that he had been abducted by aliens, so you can see science fiction and fantasy was very much a part of early years.”

She went to New York hoping to break into acting or music. She studied drama at New York University and picked up occasional modeling and acting work through the Ford Talent Agency. But her heart was definitely into music at that point. “I had been in a bunch of punk bands and real edgy, alternative stuff. I was in bands that played at CBGB’s and all those kind of places.”

Wuhrer’s first break came when MTV hired her to host Remote Control. She stuck with the game show for two years before packing her bags and heading for Los Angeles. Once again the lure was music rather than acting. “I came out to L.A. because I had a deal with Def American records. But once I got out here, I found that I wasn’t going to have control over my musical direction. So I just walked away from that and began to get work as an actress.”

She landed a role in Class of ’96, a Fox series which lasted one season, and followed that with a recurring role during a season of “Beverly Hills 90210”. Wuhrer soon added films to her resume: “Thinner”, “The Crossing Guard”, “Higher Learning”, “The Disappearance of Kevin Johnson”, “Sex and the Single Man”, “An Occasional Hell” and “Beastmaster2 — Through The Portal Of Time”. “There has been some good stuff and some bad stuff” she admits. “I’ve gotten to the point where people know my name around town. I can always get an appointment to audition but that doesn’t mean I’m going to get cast.”

As for Sliders’ shuffle over to the Sci-Fi Channel, Kari Wuhrer can only speculate on what the fan reaction will be to the restructured adventure. “Some people will love it, and others will hate the new season. Many people don’t like change, It’s like when they replaced Darren on Bewitched. But I think once viewers start getting into the season, they’ll forget about all that. Because they’re going to like what they see.”