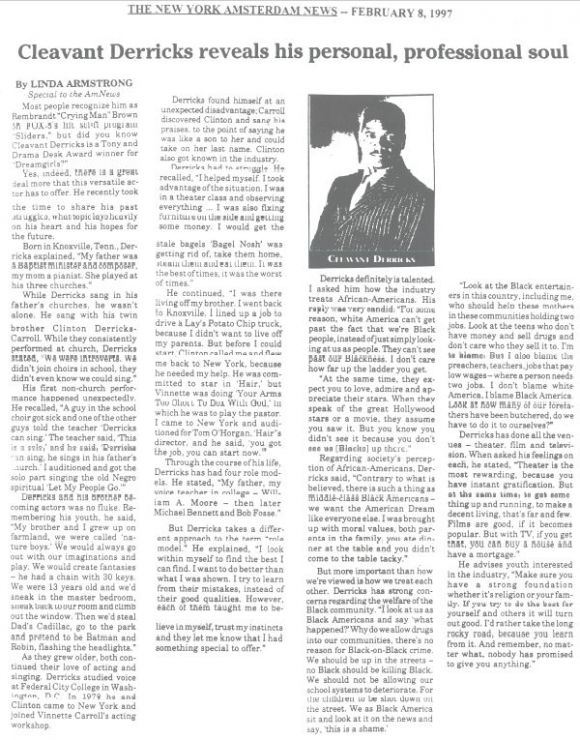 The New York Amsterdam News, Linda Armstrong, February 8, 1997 — Most people recognize him as Rembrandt “Crying Man” Brown on FOX-5’s hit sci-fi program, Sliders, but did you know Cleavant Derricks is a Tony and Drama Desk Award winner for Dreamgirls? Yes, indeed, there is a great deal more that this versatile actor has to offer. He recently took the time to share his past struggles, what topic lays heavily on his heart and his hopes for the future.

Born in Knoxville, Tennessee, Derricks explained, “My father was a Baptist minister and composer, my mom a pianist. She played at his three churches.” While Derricks sang in his father’s churches, he wasn’t alone. He sang with his twin brother Clinton Derricks-Carroll. While they consistently performed at church, Derricks stated, “We were introverts. We didn’t join choirs in school. They didn’t even know we could sing.”

His first non-church performance happened unexpectedly. He recalled, “A guy in the school choir got sick and one of the other guys told the teacher ‘Derricks can sing.’ The teacher said, ‘This is a solo,’ and he said, ‘Derricks can sing, he sings in his father’s church.’ I auditioned and got the solo.”

Derricks and his brother becoming actors was no fluke. Remembering his youth, he said, “My brother and I grew up on farmland. We were called ‘nature boys.’ We would always go out with our imaginations and play. We would create fantasies — he had a chain with 30 keys. We were 13-years-old and we’d sneak in the master bedroom, sneak back to our room and climb out the window. Then we’d steal Dad’s Cadillac, go to the park and pretend to be Batman and Robin, flashing the headlights.”

As they grew older, both continued their love of acting and singing. Derricks studied voice at Federal City College in Washington, DC. In 1978, he and Clinton came to New York and joined Vinnette Carroll’ s acting workshop.

Derricks found himself at an unexpected disadvantage. Carroll discovered Clinton and sang his praises, to the point of saying he was like a son to her and could take on her last name. Clinton also got known in the industry.

Derricks had to struggle. He recalled, “I helped myself. I took advantage of the situation. I was in a theater class and observing everything. I was also fixing furniture on the side and getting some money. I would get the stale bagels that Bagel Nosh was getting rid of, take them home, steam them and eat them. It was the best of times, it was the worst of times.”

He continued, “I was living off my brother. I went back to Knoxville. I lined up a job to drive a Lay’s Potato Chip truck, because I didn’t want to live off my parents. But before I could start, Clinton called me and flew me back to New York, because he needed my help. He was committed to star in Hair, but Vinnette was doing Your Arms Too Short To Box With God, in which he was to play the pastor. I came to New York and auditioned for Tom O’Horgan, Hair’s director, and he said, ‘You got the job, you can start now.'”

Through the course of his life, Derricks has had four role models. He stated, “My father, my voice teacher in college — William A. Moore — then later Michael Bennett and Bob Fosse.”

But Derricks takes a different approach to the term role model. He explained, “I look within myself to find the best I can find. I want to do better than what I was shown. I try to learn from their mistakes instead of their good qualities. However, each of them taught me to believe in myself, trust my instincts and they let me know that I had something special to offer.”

Derricks definitely is talented. I asked him how the industry treats African-Americans. His reply was very candid. “For some reason, white America can’t get past the fact that we’re Black people, instead of just simply looking at us as people. They can’t see past our Blackness. I don’t care how far up the ladder you get.

“At the same time, they expect you to love, admire and appreciate their stars. When they speak of the great Hollywood stars or a movie, they assume you saw it. But you know you didn’t see it because you don’t see us [Blacks] up there.”

Regarding society’s perception of African-Americans, Derricks said, “Contrary to what is believed, there is such a thing as middle-class Black Americans — we want the American Dream like everyone else. I was brought up with moral values, both parents in the family, you ate dinner at the table and you didn’t come to the table tacky.”

But more important than how we’re viewed is how we treat each other. Derricks has strong concerns regarding the welfare of the Black community. “I look at us as Black Americans and say ‘What happened?’ Why do we allow drugs into our communities, there’s no reason for Black-on-Black crime. We should be up in the streets — no Black should be killing Black. We should not be allowing our school systems to deteriorate. For the children to be shot down on the street. We as Black America sit and look at it on the news and say, ‘This is a shame.’

“Look at the Black entertainers in this country, including me, who should help these mothers in these communities holding two jobs. Look at the teens who don’t have money and sell drugs and don’t care who they sell it to. I’m to blame. But I also blame the preachers, teachers, jobs that pay low wages — where a person needs two jobs. I don’t blame white America, I blame Black America. Look at how many of our forefathers have been butchered, do we have to do it to ourselves?”

Derricks has done all the venues — theater, film and television. When asked his feelings on each, he stated, “Theater is the most rewarding, because you have instant gratification. But at the same time, to get something up and running, to make a decent living, that’s far and few. Films are good, if it becomes popular. But with TV, if you get that, you can buy a house and have a mortgage.”

He advises youth interested in the industry, “Make sure you have a strong foundation whether it’s religion or your family. If you try to do the best for yourself and others it will turn out good. I’d rather take the long rocky road, because you learn from it. And remember, no matter what, nobody has promised to give you anything.”