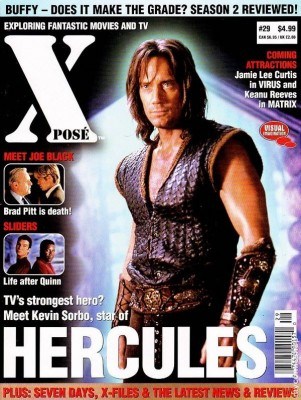 It appears that Sliders can never die. The show has survived numerous cancellations, changes in producers, a shift in format, the departure of series regulars Sabrina Lloyd and John Rhys-Davies, and now even the loss of leading man Jerry O’Connell and his brother Charlie has not shut down the wormhole. A fifth season entered production at the beginning of October, once again for the Sci-Fi Channel, with Cleavant Derricks and Kari Wuhrer signed up to reprise their roles, and Robert Floyd and Tembi Locke confirmed as two new characters, the ‘melded’ Mallory and Diana Davis.

With O’Connell’s departure, Derricks is the only cast member to have endured since the beginning. Those four years have seen major developments in the character of Rembrandt Brown, the washed-up rhythm and blues singer who became an unwilling participant in Quinn’s slide through parallel dimensions.

As Sliders has matured; so has Rembrandt; no longer a figure of fun, the “Crying Man” gained a new lease of life in the fourth season. Interned by the Kromaggs, brutal creatures who are subjugating parallel Earths, Remmy became a darker, troubled soul. He was even revealed to be a traitor in the standout episode Slidecage, programmed by the aliens to deliver Quinn to them.

The re-invention of Sliders as a more intelligent, character based show has certainly paid high dividends, attracting excellent audience figures and widespread critical acclaim. In terms of quality it is streets ahead of the sometimes aimless, derivative series that somehow managed to survive three years on the Fox Network.

“I wasn’t surprised Fox let us go,” says Derricks, looking back to Sliders‘ cancellation at the end of season three. “Being in the business as long as I have, and recognizing when a network is not quite in your corner, you can see the writing on the wall, you’re pretty much aware whether you’re going to be back next season or not. I had hopes that the Sci-Fi Network would come in and rescue us and put us where I think we belonged in the first place, and so all of those things came into play, and it’s been a lot of fun.

“We were never what you would call an ‘in-house’ show for Fox. Fox didn’t own us. We were owned and controlled pretty much by Universal, and any time that a network doesn’t own you, they feel like they don’t have a complete hold on you. What happens is that executives at studios change constantly, so at the time we came in there was an executive there who loved us. After he left, there was an executive there who hated us. That’s the cross you have to bear sometimes when you’re doing television. Interestingly enough there’s a much higher turnover in terms of executives than actors in front of the camera, so you expect those things to happen.”

The problem was exacerbated by the scheduling of Sliders on a Friday night, an evening that networks recognize as hard to win an audience. Worse still, it was paired with Millennium, Chris Carter’s unrelentingly dark and oppressive series which, a the time, explored the world of serial killers.

“Millennium was so dark, and Fox was after us to make [Sliders] darker,” he shrugs. “We made it darker, and somebody said, ‘Wait a minute, you can’t be X-Files, so let’s try something else.’ [On] a network, whatever they do for one, they’ve got to do for the other. Obviously, Millennium was their in-house show so they’re going to do more for that.” Derricks remembers the summer of 1997 as a time of un-rest, when it seemed that Sliders might finally have bitten the dust — and this period of regular, enjoyable employment could be over. “The thing about this particular show is that we always have fun, so the possibilities of that not coming into play anymore was a little bit discouraging,” he asserts. “You have a life and a lifestyle you want to maintain, and [it’s tough] thinking of going back to the drawing board, seeing what else is out there, meeting the payments again… But all in all it seems to come through each time, because from day one since we’ve been with this show, it’s always been ‘Maybe you’re coming back,’ and then at the last minute they pull us in. You do it enough; you get somewhat used to it.”

For the fourth season, Sliders remained with Universal Studios in Los Angeles, but suffered a significant cut in its budget (reportedly from $1.25 million per episode to under $1 million.)

“We were doing a lot of location shoots [for season three],” reveals Derricks. “They were taking us 45, 50 miles out [of LA], and putting us up in hotels to do certain shows. Quite frankly they felt that last season a lot of money may have been wasted on that aspect.”

As a result, most of the Season Four episodes have utilized standing out door sets on the Universal lot to create a diverse range of parallel Earths. Likewise, there is a smaller production team, and a number of inventive stories set within the Chandler Hotel — like The Alternateville Horror and Data World — helped us save money.

“It seems to be more relaxed,” offers Derricks, while comparing working for the Sci-Fi Network to the days with Fox. “It’s a tighter group, and you’ve got one man at the helm, David Peckinpah, instead of three or four with different ideas. That’s the way it needs to be — someone with the vision, to tell us what to do. That way things don’t get confused, with three of four different ideas coming across and trying to convey them to an audience.

“I feel so much better with the Sci-Fi Network. I feel like they care, I feel like it’s a network that’s behind you 100 per cent.”

Thanks to the inventive talents of writers like Bill Dial, Marc Scott Zicree and Chris Black, Sliders no longer boasts pedestrian fare like the episodes Dinoslide,Slither and Desert Storm — formulaic crowd-pleasers intended to cash-in on popular movies.

“When you do stories like we did last year — like the dinosaurs and the hurricanes and the volcanoes and so forth — it’s very difficult when you don’t have a big budget. The movies can do it and do a great job of it when you have a small budget; it’s difficult to give the kind of effects that audiences are used to seeing. This time we’ve done more human interest stories, more character-driven stores, which I find interesting. What we, as actors, are always looking fore are character-driven scripts where we get a chance to participate and the character gets a chance to grow. And the audience gets a chance to love, hate, communicate or identify with your character. I think that’s what makes television work.”

What didn’t work, he believes, was the somewhat two-dimensional Rembrandt that writers created for the early seasons. Concerned that the character could slide into the realms of cliché’, Derricks took his grievances to the new producers — and found that they were totally in tune with his thinking.

“The guys looked at it they saw it, they understood what I was talking about,” he beams. “They knew it going in, and they’ve been 100 per cent supportive of what I felt about the character. I’ve seen changes each time we’ve come back, and this time you’ve seen more depth. As an actor I’m interested in growing.

“Rembrandt is the character that everybody pretty much relates to. He asks the questions that I think the audience asks. He’s the person the audience looks to provide real information, to talk down-to-earth- make it plain, make it clear, so they can understand what’s going on. He also has a lot of heart, he has a lot of compassion.”

With the discovery in Season Four’s opening story, Genesis, that Quinn was actually born on a parallel Earth, the series gained a new direction, as the war with the Kromaggs intensified, and Colin Mallory (Charlie O’Connell) was introduced.

“I like him a lot,” say Derricks of the sadly short-lived new recruit. “I think his character certainly adds something to the show. It helps me because it adds some of the humor, so a lot of that is taken off of my character’s shoulders. So they don’t look at my character so much to be just the funny guy all the time, it gives me something else to play. I’m impressed with Charlie’s work.”

Like critics and audiences, Derricks recognizes that Sliders is now better than ever, offering strong Science Fiction stories mixes with its own unique, light-hearted touch. The commissioning of 18 more episodes for 1999 is a welcome bonus, and, if the quality is maintained, there’s no reason at all why the show could not continue beyond that.

“This is the year that we’ve really found our niche,” enthuses the actor. “This season we truly found it. We’re starting to bring a viewing audience into the Sci-Fi Network. “I think we can do at least one more really good one.”