Derricks slides into a revamped role 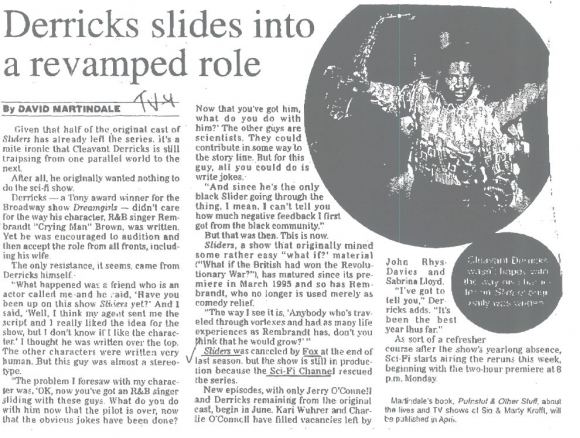 Houston Chronicle, David Martindale, March 1, 1998 — Given that half of the original cast of Sliders has already left the series, it’s a mile ironic that Cleavant Derricks is still traipsing from one parallel world to the next. After all, he originally wanted nothing to do the sci-fi show.

Derricks — a Tony award winner for the Broadway show Dreamgirls — didn’t care for the way his character, R&B singer Rembrandt “Cryin’ Man” Brown, was written. Yet he was encouraged to audition and then accept the role from all fronts, including his wife. The only resistance, it seems; came from Derricks himself

“What happened was: a friend who is an actor called me and he said, ‘Have you been up on this show Sliders yet? And I said, ‘Well, I think my agent sent me the script and I really liked the idea for the show, but I don’t know if I like the character.’ I thought he was written over the top. The other characters were written very human. But this guy was almost a stereotype.

“The problem I foresaw with my character was. ‘OK, now you’ve got an R&B singer gliding with these guys. What do you do with him now that the pilot is over, now that the obvious jokes have been done? Now that you’ve got him, what do you do with him?’ The other guys are scientists. They could contribute in some way to the story line. But for this guy, all you could do is write jokes.

“And since he’s the only black Slider going through the tiling, I mean, I can’t tell you how much negative feedback I got from the black community.”

But that was then. This is now.

Sliders, a show that originally mined some rather easy “what if?’ material (“What if the British had won the Revolutionary War?”), has matured since its premiere in March 1995 and so has Rembrandt, who no longer is used merely as comedy relief.

“The way I see it is, ‘Anybody who’s traveled through vortexes and had as many life experiences as Rembrandt has, don’t you think that he would grow?’ ”

Sliders was canceled by Fox at the end of last season, but the show is still in production because the Sci-Fi Channel rescued the series.

New episodes, with only Jerry O’Connell and Derricks remaining from the original cast, begin in June. Kari Wuhrer and Charlie O’Connell have filled vacancies left by

As sort of a refresher course after the show a year-long absence, Sci-Fi starts airing the reruns this week, beginning with the two-hour premiere at 8 p.m. Monday.