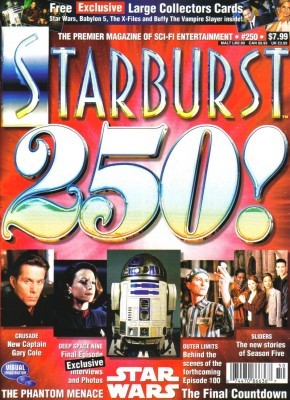 Long-standing fans of Sliders will face something of a shock when the show returns for a new season in the summer. In the opening scenes of the first episode, two of the principal characters — Quinn Mallory (Jerry O’Connell) and Colin (Charlie O’Connell) — are lost in a freak accident within the sliding vortex…

For executive producer Bill Dial, the fifth year has been a time of change and discovery. Dial joined for Season Four, after the show had been cancelled by Fox and subsequently bought by the Sci-Fi Channel. Freed of network interference, he and his colleagues were able to reinvent the series for a more discriminating audience. Sliders became edgier, more cerebral, and told some terrific, high concept stories.

Given the quality of the production during Season Four it seemed almost inevitable that a further series would be commissioned. However, few fans had envisaged Sliders continuing without Jerry O’Connell, who had headlined the show from the very beginning…

“Jerry had created that role, and he’s a very important part of the show, not only as a leading man, but as a producer and director,” Dial tells Starburst as we meet in his office at Universal Studios. “He directed four or five shows, and he was terrific. In addition to being a very talented guy, he’s also one of the nicest and most grounded young men I’ve ever known. “He just sold a big screenplay; so he has an unlimited future and I think he wants to go with that. We wish him the best — both he and Charlie are great guys.”

It’s obvious there are no bad feelings concerning the O’Connell’s decision to pursue their respective careers; and the Sliders production staff have chosen to use their departure as an opportunity rather than a burden. Enter a new recurring villain, Dr. Geiger, played by Babylon 5’s Peter Jurasik and a fresh story arc that will span the fifth season. “We had this idea of a physicist trying for world domination on a quantum particle level,” Dial offers. “But he’s ‘unstuck’. Basically he’s been fiddling around with some quantum force field that has kind of unglued him from dimensions — he can’t stick in one dimension. He manages to put together a force field that contains him, but what he’s trying to do is create a universe that he can live in.”

As the season opens, Dr Geiger believes he has found a way to escape his prison within the vortex — by melding himself with an unwitting Slider. First he must test the process, and chooses a lab rat from a parallel dimension… Quinn’s own double, Mallory. The results of this experiment are devastating: Colin is seemingly vaporized, and Quinn becomes the ‘melded’ version of two people, played by newcomer Robert Floyd.

Earlier in the day, we had met Floyd, and instantly noticed strong similarities between the young actor and Jerry O’Connell. Had this been a factor when the character was being cast? “In a lot of ways he does;” Dial concurs. “But aspects of the old Quinn only appear in the first couple of shows, and then the old Quinn goes away and it’s explained. We didn’t want to have Robert having to be Jerry, although in the beginning it was a pretty good idea. “He’s a good looking leading man type, and we are finding his comic abilities. That Quinn Mallory was a genius; this character is basically a lab rat, a gopher. He’s a little more ‘street’ than Jerry’s character was. He can hotwire cars and get out of meat lockers. There are all these little shady things that we learn about him as we go along.”

The loss of Colin and the existence of the melded Mallory are a terrible blow for existing Sliders Rembrandt (Cleavant Derricks, now the show’s longest-serving cast member) and Maggie (Kari Wuhrer). They are forced to seek help from Dr Geiger’s assistant, quantum physicist Diana (Tembi Locke), who is unaware of her mentor’s evil schemes. Shocked to discover the state of her friend Mallory, she decides to travel with the Sliders, and vows to find a way to un-meld them.

“Tembi has been remarkable,” Dial enthuses. “Her audition was purposefully a tongue twister. It ended up not even being in the first script — it was just all of this techno gobbledygook. We figured that any actress who comes in here that can do this could do anything else we throw at her. “She’s a very intelligent, focused young woman. She’s also being played as a kind of… not shrinking violet, but she’s always pursued an intellectual career and not had a social life that Maggie has had. So we’re introducing her a little bit to that.”

There have been many changes to Sliders since the show first began. Originally the show followed the brilliant young inventor: Quinn, his mentor Professor Arturo (John Rhys-Davis), Wade Welles (Sabrina Lloyd) and Rembrandt Brown, traveling between dimensions and attempting to return to their original Earth. Three years later, Arturo has been killed off and replaced by gutsy Marine Maggie Beckett. Wade disappeared between seasons, abducted by the Sliding aggressors known as Kromaggs. And ‘our’ Earth was conquered by the creatures, as Quinn discovered he was actually born in a parallel dimension, and that he has a brother…

Although Dial and his team have chosen to tone down the Kromagg storyline in Season Five; we are promised — at last — some resolution to the disappearance of Wade. “As Groucho used to say, ‘There won’t be a dry seat in the house’,” the executive producer promises of that story. “We invited Sabrina Lloyd to play the part, but she’s in another show right now. She is coming in here on Friday, and she is going to do the voice of the character. “Her character has been altered,” adds Dial elusively, “we’re just using Sabrina’s voice.”

Asked to choose some highlights from the forthcoming season, Dial thinks back over the 18 storylines that have been committed to film since shooting began in October. “One of the things that is most fun for me with this particular series is that we can jump across genres very easily,” he muses, “because we are going to different worlds. We have done crime stories, we have done romantic stories, this year we’ve done a war story, we did a musical with a choreographed dance number. We just finished a show that started off being like To Catch a Thief, with a jewel heist in a luxurious hotel where a film festival is going on and it ended up being more like a screwball comedy. So we can go from comedy to tragedy.

“We did a show this year in which Maggie’ s character confronts her father. Chris Black wrote it. In our mythology, Maggie’s father was a Marine general who probably pushed her into the military. He was very distant, very cold, and this has been a problem that Maggie has been trying to work out. “She lands on a world and her alternate father is there, who had a daughter called Maggie that he lost. The thing that Chris did, which was really nice, was that this father is able to resolve problems he had with his daughter with Maggie, who is not his daughter, and Maggie is able to resolve problems she had with her father with this guy. It was a very nice piece of tightrope writing — a very moving episode.”

A tour of the Sliders set also confirms that the Chandler Hotel — an establishment the travelers check into in most of the dimensions they visit — still plays a part in the series. Last year the Hotel was used as an obvious cost-saving exercise and a few stories (The Alternateville Horror, (Data World) took place entirely within its confines. Dial reveals there were some lessons to be learned, but the idea of attempting ‘bottle shows’ has been revisited this season. “(The Alternateville Horror was a standard ghost story,” he says. “It started off with the idea that we would save a little money, but that show ended up taking seven days to shoot — longer than we would normally take because it was so complex. “We just did a show in which the Chandler Hotel is an archaeological dig. Somehow it’s 400 years off from our time, and it’s layered over with sediment and our people get to be part of this dig. When they go and see it’s the Chandler, they find a beer mug that the archaeologist decides is a sacrificial goblet, then they have a big debate over what a parking meter might have been: ‘It sells time… but to what end’! It’s really our take on how these funny archaeologists can find one pot and then invent an entire civilization!”

When Starburst visited the studio during March, only a few weeks worth of shooting remained. Yet again, the future of Sliders is undecided, but one might hope that, given the amazing developments of the past two years, it must be good for another season…

“I don’t know what the plans are from the Sci-Fi Channel,” Dial reveals. “They might not know what their plans are. Certainly I think the show should go on, whether I am involved in it or not, because it is successful and it’s making money and it’s got a wide-open premise. They can bring in all sorts of characters and go all kinds of places.

“The practicality is that everybody here is going to be unemployed in a couple of weeks, and the nature of the business is that people will do and take whatever they have to. I would like to be able to keep the company together… Last year the decision wasn’t made for quite a while. We had all split up and gone to other places. It wasn’t until August or sometime, and then it was a scuffle to try and get back the company together. One of the reasons we are able to do it for this money is the specific combination of people. I’ve been doing it a long time, and these are the best people I’ve ever worked with. I’m getting a little melancholy.”