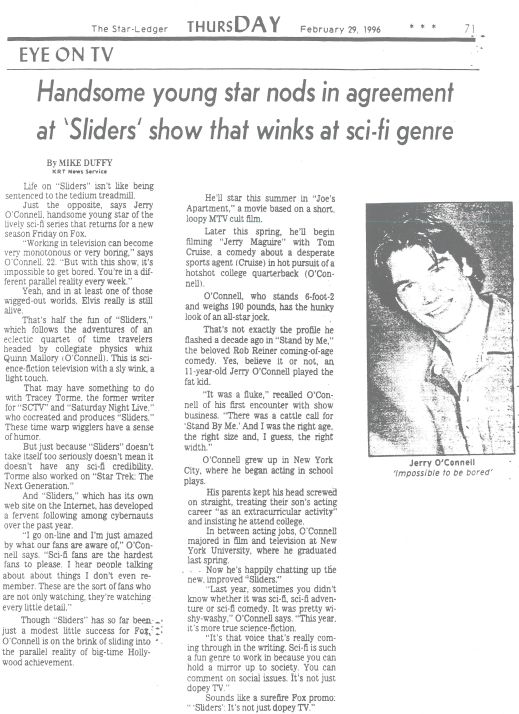 The Star Ledger, Mike Duffy, February 29, 1996 — Life on Sliders isn’t like being sentenced to the tedium treadmill. Just the opposite, says Jerry O’Connell, handsome young star of the lively sci-fi series that returns for a new season Friday on FOX. “Working in television can become very monotonous or very boring,” says O’Connell. 22. “But with this show, it’s impossible to get bored. You’re in a different parallel reality every week.”

Yeah, and in at least one of those wigged out worlds, Elvis really is still alive. That’s half the fun of Sliders which follows the adventures of an eclectic quartet of travelers headed by collegiate physics whiz Quinn Mallory (O’Connell). This is science-fiction television with a sly wink, a light touch.

That may have something to do with Tracy Tormé, the former writer for SCTV and Saturday Night Live, who co-created and produces “Sliders.” These time warp wigglers have a sense of humor.

But just because Sliders doesn’t take itself too seriously doesn’t mean it doesn’t have any sci-fi credibility, Torme also worked on Star Trek: The Next Generation.

And Sliders, which has its own web site on the Internet, has developed a fervent following among cybemauts over the past year.

“I go on-line and I’m just amazed by what our fans are aware of,” O’Connell says. “Sci-fi fans are the hardest fans to please. I hear people talking about things I don’t even remember. These are the sort of fans who are not only watching, they’re watching every little detail.”

Though Sliders has so far been just a modest little success for FOX, O’Connell is on the brink of sliding into the parallel reality of big-time Hollywood achievement.

He’ll star this summer in Joe’s Apartment, a movie based on a short, loopy MTV cult film.

O’Connell, who stands 6-foot-2 and weighs 190 pounds, has the hunky look of an all-star jock.

That’s not exactly the profile he flashed a decade ago in “Stand by Me, the beloved Rob Reiner coming-of-age comedy. Yes, believe it or not, an 11-year-old Jerry O’Connell played the fat kid.

“It was a fluke,” recalled O’Connell of his first encounter with show business. “There was a cattle call for Stand By Me. And I was the right age, the right size and, I guess, the right width.”

O’Connell grew up in New York City, where he began acting in school plays.

His parents kept his head screwed on straight, treating their son’s acting career “as an extracurricular activity” and insisting he attend college. He majored in film and television at New York University, where he graduated last spring.

“It’s that voice that’s really coming through in the writing. Sci-fi is such a fun genre to work in because you can hold a mirror up to society. You can comment on social issues. It’s not just dopey TV.”