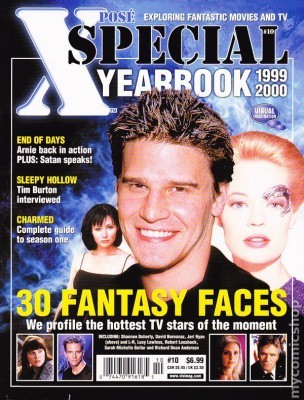 This was the year that the Sliders ensemble encountered their final parallel universe. After five seasons and seemingly the most turbulent ride in the history of television (numerous cancellations, reprieves, the loss of leading actors), the Sci-Fi Channel finally called it a day as the series notched up a substantial syndication package.

For the truncated fifth season, only one of the original cast remains. John Rhys Davies, who played Professor Arturo, had a heroic exit in the middle of the third year. Sabrina Lloyd, who played the popular Wade Welles, departed at the of that season, and both Jerry O’Connell and his brother Charlie (Quinn and Colin Mallory) failed to reach a contractual agreement for the final season.

That leaves Cleavant Derricks, who plays Rembrandt Brown, as the sole series veteran.

“We’re still having fun, which is the most important thing right now,” he tells Xpose as we met during filming of the penultimate episode.

“I miss the team, but you go on,” he says practically, “It’s like when you do anything as an actor. You spend some time with another actor in a series and then you move on to something else. You usually stay out of touch with that person until you see them again and rehash old times. I’ve got new people with me, a lot of the same crew is back and we’ve got the same great producers, so it’s good.”

Nevertheless, Derricks admits that he had some initial concerns about the fifth season.

“When they told me we were coming back, and I found out that Jerry and Charlie weren’t, there was a point where I said, ‘Now is it really worth it? Taking a chance to come back with a show where I don’t know who they are going to bring in?’ I really got a kick out of working with those brothers.”

Derricks admits that his fears were unjustified. To fill the gap left by Jerry and Charlie, the Sliders producers invented two new characters: Mallory, an amalgamation of Quinn and a parallel universe duplicate, and the physicist Dr. Diana Davis. After extensive casting sessions, two bright, charismatic actors were found for the roles: Robert Floyd and Tembi Locke.

“When I met these new guys I said, ‘You know what? It’s going to be fun like it always was.’ And it’s been like that. These guys are great.

The new regulars are introduced in the season opener The Unstuck Man, as Rembrandt and Maggie find the new Quinn and seek help from Diana. By the episode’s end we have a new gang of inter-dimensional travelers and Derricks claims that the on-screen chemistry was almost instantaneous.

“It was very easy,” he says, with a twinkle in his eye. “I had a really nice talk with them. I said, ‘Guys, I’m not going to stand for crap from anybody!”

He laughs, then continues: “No! Actually they have a great sense of humor. All I expect of anybody who comes on this show is just to have a great sense of humor. A lot of times we would like to connect the dots with a lot of the scripts, but you can’t. You just gotta go in and play it as it is and have fun with it. As long as you are having fun, you can get through it and try to do the best we can with what we have.

“I think this season is better than last season in a lot of ways. Last season was very good. [Executive producer] Bill Dial once told me, ‘You know what, I’m finally getting the hang of this thing, and this might be the last season!’ That’s the way we feel about it: the writing is still good, the new characters are working well with us and we’re having a lot of fun.”

For most of its run, male characters have dominated. Seasons one, two and four stuck with an ensemble of three guys and one girl; only season three toyed briefly with an even mix as tough soldier Maggie [Kari Wuhrer] replaces the Professor. For its final year, there’s sexual equality all the way.

“Is there more of a balance?” muses Derricks. “Maybe so, because the girl has somebody to work off and identify with. The girl in this show has never had that before. It’s always been an ensemble piece and the show has always been the thing that everybody works towards. I don’t know if it really matters. Whatever the formula is, it seems to work.”

As we sit in a corner of the Sliders sound stage, whispering to ensure that we do not interrupt the nearby filming, so Derricks’ colleagues drop by. Tembi Locke drifts past, throwing in the occasional remark, while a production assistant leans into the microphone, insisting that Derricks is a troublesome star who creates hell. The actor again lets loose that hearty laugh. It’s easy to see why he enjoys working here.

“That’s the way I like it,” he continues, “and a lot of it comes from our executive producer David Peckinpah, who is directing this episode. I told him, ‘Your personality is always on the set.’ I love the laughs, I love the jokes, I love the kidding around.

“We get serious and we do what we need to do. We have a great relaxed atmosphere. We have a smaller crew even than we had last year and things are going just as quickly and people are working just as hard.”

Looking back over the past few years of Sliders, Derricks finds it easy to choose a favorite episode: the fourth season’s California Reich. That stand-out story finds the team sliding into a world run by a Nazi-like organization, where ‘citizens of color’ are shipped into detention camps for ‘racial repatriation’. As well as delivering a mind-blowing twist (the android-like workers in this society are actually ‘processed’ Blacks, Asians, Indians…) the show has a pertinent message. As we discover, this fictional world that values ‘racial purity’ must come to terms with the fact that, in the melting pot of modern society, no such thing exists.

“I don’t know if I have one as strong this season; I don’t recall one as powerful for me. But we’ve got so much to deal with in the newness of the characters.”

“I think the first maybe six stories are centered around the development of the new characters. You have to give them time to settle in and for the audience to understand who they are. Hopefully we have done that. Most of the storylines now are lending themselves towards Earth Prime: each episode we are getting closer and closer, but there is always a hurdle to cross. The point of Earth Prime is always there.”

There’s no denying that the producers of Sliders have had plenty to juggle in just 18 episodes: Quinn and Colin exit, Mallory and Diana’s arrival, The Kromaggs, the introduction of new villain Dr. Geiger (Peter Jurasik), the search for Earth Prime… even so, they have still managed to find time address some unanswered questions, including revisiting the character of Wade Welles, who was abducted between the third and fourth seasons. For Requiem, Sabrina Lloyd returned to voice the role, while a body double played her in the deformed flesh.

Sliders comes to an end with The Seer, an episode that guest-stars popular genre actor Roy Dotrice. When asked if the story will bring some sort of closure, Derricks shakes his head.

“I never think it should end with any kind of closure,” he insists. “I think one or all of us will go on to slide. The thing about sliding — in all of our imaginations — is that once you start it is difficult to stop. I don’t care what your goals may have been along the line, but once you start it’s very hard to give up.”

Sadly, Derricks has come to terms with giving up Sliders. With just a few episodes left to air on the Sci-Fi Channel, the show is considered completed. The production office disbanded months ago, standing sets were torn down and the cast moved on to other projects.

Could the series ever be revived? As Derricks says, stranger things have happened.

“You never know with this show. It’s always been at the brink of the end, always at the end of the season it’s like, ‘That’s it, it doesn’t look like it’s coming back’ and it’s always raised its beautiful head again. We’ll see.”