It’s Nothing to Cry About 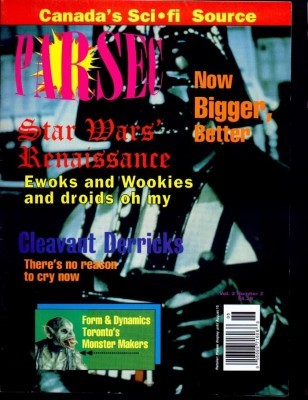 If he hadn’t appeared in the Broadway play Dreamgirls, veteran actor Cleavant Derricks might never have been offered the role of Rembrandt “The Crying Man” Brown in Sliders. Yet Derricks almost decided to turn down the part after his first glance at the script for the pilot episode.

“To be quite frank, I didn’t want to do it,” Derricks says. “When I read the pilot, I though the character was a little over-the-top.”

Rhythm and blues singer Rembrandt Brown, as he was first depicted, seemed too much larger-than-life and a bit stereotypical to Derricks. It wasn’t until he heard from fellow actors that director Andy Tennant had specifically asked for him, that Derricks decided to give the role more consideration.

“He had seen me in Dreamgirls — five times,” Derricks explained. “And the character I played in that had the flavor of Rembrandt.”

The character of James Thunder Early in the Tony Award-winning musical had a certain lightheartedness that impressed Tennant and made him think immediately of Derricks for the role of Rembrandt Brown when work began on Sliders.

But Derricks still had some doubts so he talked it over with his wife. She suggested that he could always go into the project and voice his opinions about the character. And, if Sliders was picked up as a regular series, he could then always try to rework the character into something that he could be proud of. Derricks agreed and the rest is Sliders history.

The appeal of doing Sliders lay in its basic concept of traveling between parallel worlds. Other science fiction programs have touched on the same theme in individual episodes, but there has never been an entire series based on it.

“Some people liken it to so many other science fiction shows,” Derricks observed. “I say, ‘Yeah, but it’s a little bit different, a little bit unique.’

“There’s so many aspects we haven’t touched on yet. It’s not going to be boring.”

Even though the director wanted him for the part, Derricks still had to go through the audition routine. But in his case, he had to sing for the part. The producers wanted him to read/sing the part of the pilot episode where Rembrandt was driving and practicing his version of the Star Spangled Banner — just before he accidentally slides through the portal with Quinn Mallory and his associates.

Derricks, who studied vocals at Federal College in Washington, D.C., has performed in a number of musical productions during his 20-year career as an actor. His roles include Judas in the Broadway production of Jesus Christ, Superstar. His singing ability was never in doubt during the audition. The question was could he sing the U.S. National Anthem the way a legendary R&B singer making a comeback would do it?

In the United States, singing the National Anthem at a baseball game has become a show almost as popular as the game itself.

“I’ve always wanted to do that,” Derricks chuckled.

During his audition and the actual scene itself, he tried to emulate what some of the great singers have done with The Star Spangled Banner in the past.

“It was the best. It was hysterical.”

Derricks says he loves working with an ensemble cast and knew at the time that if he could work out the stereotyping of Rembrandt Brown, then Sliders could be something “really good” for him.

He described the relationship between himself and the series’ producers and directors regarding his concerns about the character as very positive. He pointed out that they changed the character to address his concerns “without a whole lot of fuss or fight.”

Like any original idea on television, Sliders had to break through the barrier of viewer acceptance to convince network executives not to cancel the series. Derricks knew that meant sitting on tenterhooks because the series concept was so different from what most ordinary people think of when they hear the term “science fiction.”

“There was no doubt in my mind we would have a tough time getting it across.”

Derricks noted that during the first season, the Sliders crew didn’t get much feedback from Fox executives. The second season saw a 180-degree turnaround with the network brass showing up on the Vancouver set. They watched some of the episodes being put together and told the actors and production crew how popular the show had proven.

“We got more positive feedback from the network. Fox was truly involved,” Derricks said, adding that everybody felt that the network really believed in them and in the Sliders project and he credits viewer response for the turnaround.

“It has made such an impact on us, the networks and the producers. It felt so good to hear how people like it. If it weren’t for those fans, I don’t know if we’d still be here.”

A graduate of the Vinette Caroll Workshop (Urban Arts Corps), during his career Derricks has worked with and studied from veteran actors like Dabney Coleman. Derricks believes the two main lessons he’s learned during his career have helped him with his work on Sliders and other projects.

“Number one would be patience. Taking your time to really develop something rather than just taking it and throwing it out.”

Derricks noted that some actors, if their characters aren’t getting used much on a series, might ask to have themselves written out so they can look for other roles. Derricks prefers instead, in those kind of situations, to watch his fellow actors at work and see what he can learn from them that he might find useful in the future.

He also prefers to listen to others, explain his feelings about a character or storyline and then offer suggestions. He recognizes that writers, producers and directors have their own way of looking at things.

“I’ve been in some shows where the actors have gone at writers and producers like cats and dogs. That’s ridiculous.”

He said every project needs someone who can look at the big picture and is able to work with everyone to make the project succeed.

“That way things get worked out, everybody’s in a good mood and it’s nice to go to work. Those things they’ve done, I like a lot.”

Derricks has also learned to trust his instincts as an actor where it concerns a role he is performing.

If the script calls for something which seems out of character then he will point it out and offer suggestions on how to fix the things.

“Don’t be afraid to try things.”

It was this philosophy which led him to forsake his architecture studies (which he liked but didn’t love), to take up acting (which had always fascinated him). As a child, Derricks and his twin brother Clinton Derricks Carroll used to borrow their father’s 8-mm camera and shoot footage of themselves acting out stories they had created.

The brothers teamed up on the Greatfellas episode with Clinton playing Rembrandt Brown the FBI agent in a world where the Mob controls America.

By the end of his second season of sliding, Derricks was much more comfortable with the character. The Crying Man had evolved beyond the character of the pilot episode.

“Rembrandt Brown is someone who has never given up his dream. He’s also allowed good relationships to pass him by for the sake of that dream. His true heart and soul is that he’s a singer and he’ll always be a singer.”

Derricks observed that Brown has a very strong spiritual side, was probably brought up with a very strong church background and could have become a gospel singer, but may have broken away from his family and past to pursue his own dreams.

Derricks is reluctant to draw too many parallels between his life and that of Rembrandt Brown. His training in architecture was a result of his father’s wishes for him until Derricks decided to follow his path and become an actor.

Unlike the other Sliders, especially [Quinn] Mallory, Rembrandt Brown doesn’t indulge in a great deal of introspection about being in a world where he might be forced to kill.

Derricks has suggested that Rembrandt shouldn’t be joining in a mutual recrimination scene. Derricks believed that Brown is familiar enough with this kind of situation because of some events in his own past.

“That’s what I mean about trusting your instincts,” Derricks said. “I want to stretch Rembrandt. I don’t want to typecast the character. I want him to challenge me. I look for other avenues for this guy because I want him to be more challenging.”

Some time in the future, Derricks would like to try his hand at directing live theater, but only if he can be sure that the people he’s involved with are ready to give their best to the project. Of all the forums for acting he’s been involved with, he loves theater the most.

“Most actors will tell you the same thing.”

Derricks pointed out that a theater production moves from start to finish unlike film and television where scenes are often shot out of sequence and then edited together. But the main attraction for him is the immediate response to what is being done on the stage. “You sink or swim in front of 3,000 people. There is such gratification in having that thunderous applause. You can’t beat that. Everyone wants to be appreciated for what they do.”