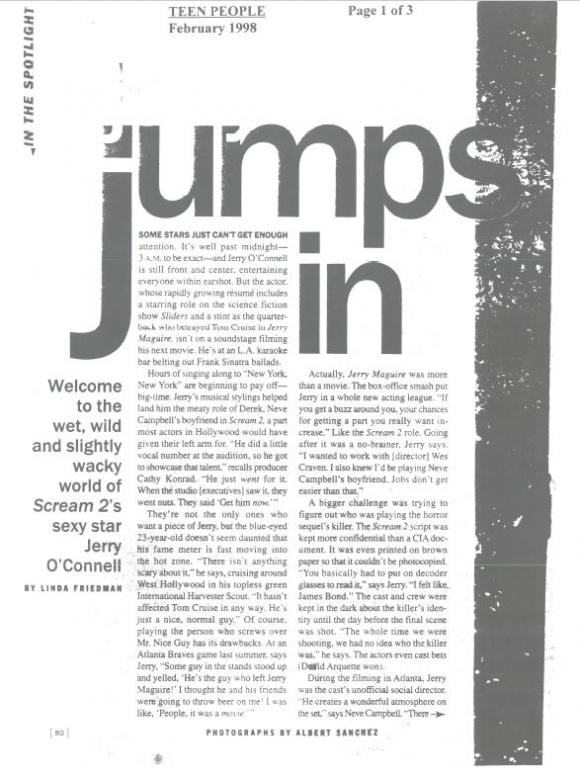 But the actor, whose rapidly growing resume includes a starring role on the science fiction show sliders and a stint as the quarterback who betrayed Tom Cruise n Jerry Maguire, isn’t on a soundstage filming his next movie. He’s at an LA karaoke bar belting out Frank Sinatra ballads.

Hours of singing along to New York, New York are beginning to pay off — big-time. Jerry’s musical stylings helped land him the meaty role of Derek, Neve Campbell’s boyfriend in Scream 2, a part most actors in Hollywood would have given their left arm for. “He did a little vocal number at the audition, so he got to showcase that talent,” recalls producer Cathy Konrad. “He just went for it. When the studio [executives] saw it, they went nuts. They said ‘Get him now.'”

They’re not the only ones who want a piece of Jerry, but the blue-eyed 23-year-old doesn’t seem daunted that his fame meter is fast moving into the hot zone. “There isn’t anything scary about it,” he says, cruising around West Hollywood in his topless green International Harvester Scout. “It hasn’t affected Tom Cruise in any way. He’s just a nice, normal guy. “  Of course, playing the person who screws over Mr. Nice Guy has its drawbacks. At an Atlanta Braves game last summer, says Jerry,”some guy in the stands stood up and yelled, ‘He’s the guy who left Jerry Maguire!’ I thought he and his friends were going to throw beer on me!  I was like, ‘People, it was a movie.'”

Actually, Jerry Maguire was more than a movie. The box-office smash put Jerry in a whole new acting league. “If you get a buzz around you, your chances for getting a part you really want increase. “  Like the Scream 2 role. Going after it was a no-brainer, Jerry says. “I wanted to work with Wes Craven. I also knew I’d be playing Neve Campbell’s boyfriend. Jobs don’t get easier than that. “

A bigger challenge was trying to figure out who was playing the horror sequel’s killer. The Scream 2 script was kept more confidential than a CIA document. It was even printed on brown paper so that it couldn’t be photocopied. “You basically had to put on decoder glasses to read it,” says Jerry. “I felt like James Bond. “ The cast and crew were kept in the dark about the killer’s identity until the day before the final scene was shot. “The whole time we were shooting, we had no idea who the killer was,” he says. The actors even cast bets (David Arquette won).

During the filming in Atlanta, Jerry was the cast’s unofficial social director. “He creates a wonderful atmosphere on the set,” says Neve Campbell. “There was a scene in which he had to sing to me, out of tune. About 150 extras had to listen to him all day long. When we wrapped, he thanked everyone for putting up with his voice and offered to take them out on the town, which he did. “

When he’s not on location, the actor lives in an LA apartment with his younger brother, Charlie, 22, who will play his older brother on Sliders (which Jerry is now producing) when the show moves from FOX to the Sci-Fi Channel this year. When they’re not on the set — or arguing about who will do the laundry — the two can usually be found surfing or committing daring fashion acts on the golf course. “The nicer the country club, the crazier our clothes are,” Jerry says. Golf is one of his serous passions; in fact, his biggest splurge so far has been a set of Titleist clubs. “You could have bought a car for the price of these clubs,” he says. “Other than that I’m a pretty cheap date. “

And a picky date too, who prefers East Coast girls to West. “I don’t mean to generalize,” Jerry says. “There are nice girls in LA I just get a little sick of the model-actress thing. “  Because he’s constantly working, his longest relationship so far has only lasted about six months — although he has no trouble meeting potential partners. “I guess it’s because of acting,” says Jerry,” but I’m not really shy around women unless they’re with a large man who looks like a kickboxer.“

Growing up in New York City, Jerry did almost every extracurricular activity but kickboxing, from art classes to fencing. “Both of my parents worked,” he says. (Mom Linda is a high school art teacher; dad Michael is a retired ad agency art director.) “They had to find activities for my brother and me. Acting is just one of the things we did. “

When he was 11, Jerry beat out about 500 kids for his first acting role, in the movie Stand by Me (which he almost didn’t take because it meant having to miss camp). Twelve years later, at 6’3″ and 180 pounds, he is rarely recognized as “the fat kid from Stand By Me,” a tag he says he could live without. “I was never really fat. I was a chunky little kid. My mom gets upset when people say I was the fat kid.“ In 1987, he transferred to Manhattan’s Professional Children’s School, then went on to major in film and TV at New York University.

Jerry and his film school buddies still meet to critique one another’s scripts in progress. Is he planning a career as that Hollywood triple threat:  actor-writer-producer? “I’d like to do all of the above,” he says. but then he reconsiders. “When they’re writing kissing scenes for you and Neve Campbell, acting is a lot better than writing and producing. My character gets kissed more than I get kissed. “