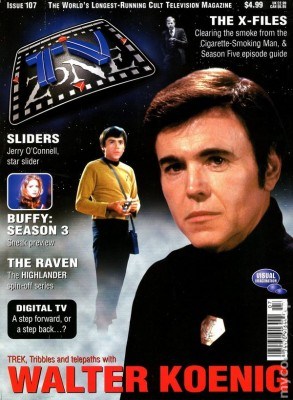 Mrs. O’Connell, the mother of Sliders stars Jerry and Charlie, is a very happy woman.

So says Jerry, on completing the fourth season of the popular show, now airing in the US and the UK.

“My mother is so excited — she is freaking out,” he laughs. “Everything else is dwarfed in comparison to her excitement that both of her sons have a job.”

Jerry has been with the series since the pilot, through good times and bad. Originally produced for the Fox Network, Sliders suffered a major setback last year when viewers criticized derivative stories, ratings began to fall, and the show was cancelled.

“I was not surprised when Fox [axed the series],” O’Connell admits. “Of course I was sad, but you move on to the next project. I’m really not one to worry about those things. I stay pretty busy.”

Of course, Sliders was saved at the 11th hour by the Sci-Fi Channel, recognizing the series’ potential. Jerry O’Connell, Cleavant Derricks (who plays Rembrandt) and Kari Wuhrer (Maggie) were signed up for 22 episodes, although Sabrina Lloyd (Wade Welles) chose not to return. In addition, O’Connell was made a producer, collaborating with David Peckinpah, Bill Dial, Ed Ledding and Marc Scott Zicree as they re-worked the format.

In Season Four’s opening story, Genesis, the Sliders finally return to their Earth, Earth Prime, to find that it has been over-run by the Kromaggs. Quinn learns that he was adopted, and that his real parents come from a parallel Earth, where humans have resisted the Kromaggs. To save Earth Prime he must go there, and along the way trace a brother he never knew he had…

“Can you believe it — I’m a producer!” O’Connell exclaims, delighted with his new role. “I have an office!”

How did this responsibility come about?

“To be honest, the show has seen a lot of changed,” O’Connell responds. “We’ve had pretty much different executive producers every year. Our originals left, we got a new one last season, a new one this season.

“It was nothing forced on them, it was nothing they forced on me, it was ‘All right, this is the fourth season, we really don’t have anyone from the old days of Sliders.’ I’ve really been around since the birth of the show, and I directed an episode last year and they knew I’m interested in [goings on] behind the camera, so there was a mutual agreement, and it’s been great so far.”

The producers entered into the fourth season with a mission: to make Sliders a quality Science Fiction series. The action-oriented stories based on popular movies, which characterized Season Three, were out; instead Peckinpah and his team would provide strong concepts and solid characterization.

“The show is a lot more cerebral,” insists the actor/producer. “It’s nice that the Sci-Fi Channel is our network, because we don’t have to appeal to a broader audience — it’s more of a specialized, dare I say more intelligent, audience that we’re catering to now.

“I love that because I’m a big Sci-Fi fan, but I’m not a ‘special effects, explosions, good looking aliens’ fan. I’m more of a cerebral Sci-Fan fan. I love the original Rod Serlings. I love those original Twilight Zones, and that was more material-based, not special-effects based, which unfortunately is what a lot of Sci-Fi is these days.

“While I can see there is a desire for special effects, I think Sci-Fi is a great outlet to make comments on social problems without actually addressing specific problems. You’ve got to have special effects, but I think they’ve got to be backed by good material.”

This change of emphasis has certainly worked in Sliders‘ favor. In just the first half-dozen episodes we have had intelligent stories about Nazi atrocities, evangelism anddrug addiction.

Life, it seems, is just rosy for O’Connell. Away from Sliders he has an impressive film career, having notched up major roles Calendar Girl, Joe’s Apartment and the Tom Cruise-starrer Jerry Maguire. Two weeks before the start of shooting for Season Four of Sliders he wrapped on Scream 2, Wes Craven’s popular box office blockbuster.

“I played Neve Campbell’s boyfriend,” he beams. “Life does not get better than that.”

Like its predecessor, Scream 2 starred some of the brightest young, new talents in Hollywood — and O’Connell was one of the lucky chosen few.

“I’m a huge Wes Craven fan,” he enthuses. “I grew up in the Eighties, which is basically the decade of Horror. I remember going to the video store and promising myself to rent every Horror video, and I gave myself a year to do it. And I did it.

“I went to NYU Film, and I did a course on the Horror genre. There were actually a couple of papers on Wes Craven, but I never brought them into work. I was just afraid that he was going to find a lot of mistakes in it. I got an ‘A’ in the paper, and I thought he’d grade it again!”

Given that his film career is going so well, one might imagine that O’Connell would have needed some persuasion to return to the small screen.

“I would always come back to Sliders,” he maintains. “It’s just one of those shows that I’m so a part of, I couldn’t imagine leaving it.”

For several weeks in 1997, O’Connell was working on both projects at once — shooting Scream 2, while involved with the pre-production work on Sliders.

“We refer to that in the business as ‘double dipping’,” he explains. “A lot of pre-production is just reading scripts and going to pretty easy meetings. The real work really happens when you’re in production. Most of the stuff I could do over the phone. It was fine, and I was so excited about starting up with Sliders again.”

O’Connell claims that, for him, the highlight of the latest season has been the chance to work with his brother, who made his début in the sixth episode, Oh Brother, Where Art Thou? It was his idea to cast Charlie in the series, after Sabrina Lloyd’s sudden departure.

“From a selfish standpoint, I thought it would be great for my character. For the last three seasons I was acting off the best, John Rhys-Davies. I was basically his student, and it was terrific. Sadly, when John left last season, the last few episodes without him there was something missing for me. We all have to move on, and he’s still a good friend, but I didn’t really like my character as much, and I really wasn’t having so much fun.

“When I heard it was coming back I thought, ‘OK, how can I get back that element that I lost?’ You can’t bring back John Rhys-Davies back because we killed him off, so I thought it would be fun to have a wilder side to my character — but of course I can’t be the wild character, because it’s been established. I thought wouldn’t it be great if my brother could be the wilder side of me and I could play off that.

“Quinn is a physics genius, which is nothing like me whatsoever — I’m really going out on a stretch on this one. This is the craziest I’ve ever played — I failed algebra! My character is very reactive to the elements around him, so I thought it would be nice if we had a [Mallory] who was more active, who when he comes up to a door, doesn’t put his ear up to it, he just kicks it down. That’s what my brother’s character is — he’s the guy who says ‘Screw it!'”

Watching the two O’Connells working together, it’s obvious that they are incredibly close. Jerry is 23, Charlie is 22, and they share an apartment, a social life and a profession.

“There’s no competition there — only in athletics! We played golf and basketball this weekend and there were five fistfights! We were punching each other on the 18th hole!

“When you work on a series… man it’s your life. A good 15 or 16 hours of my day is dedicated to this show. It’s a lot, you know. I live with my brother, so I’d come home and find myself yapping about the show and what happened on set and he had no idea what I’m talking about, so it was no interest to him whatsoever. Now we have a lot to talk about!”

With the arrival of Charlie, the dynamic between the principal cast of Sliders shifted again. During the first three seasons there were three male leads and one female. With John Rhys-Davies’ departure, and the arrival of Kari Wuhrer, it became two men and two women. Now, as the show returns to the original ratio, O’Connell insists that it works better this way.

“I’m just speaking from a speaking from a story point of view,” he says. “Usually the episodes were based on damsel in distress stories. Now that we’re on the Sci-Fi Network and anything goes — there’s absolutely no formula whatsoever now — I think you’ll find that the different in the gender ratio makes for a more wild ride. My brother and I are opposite characters, and Cleavant is sort of the moral voice of the show. Kari’s another wild one, so she and my brother have a good thing going.”

In a very short time Jerry O’Connell has achieved a great deal in Hollywood. Bigger and better things are, no doubt, on the horizon, but it’s pleasing to note that he has managed to keep success within perspective. He’s grateful for the opportunities the series has offered, and in the long-term hopes to continue working as a producer.

“I can’t believe this wave is actually still going and I’m riding it,” he exclaims. “I really like it. I’d like to see myself down the road giving birth to more projects.”

This appetite encouraged him to write his first storyline for a Sliders episode, while he has continued to direct for the show — his name graces several episodes, including the superbly stylish Slidecage.

For a 23-year-old, that’s pretty impressive. Might he be the youngest television director in Hollywood?

“Are you kidding me?” he laughs.

“I don’t know…” he frowns. “I never thought about that. It’s a possibility!”