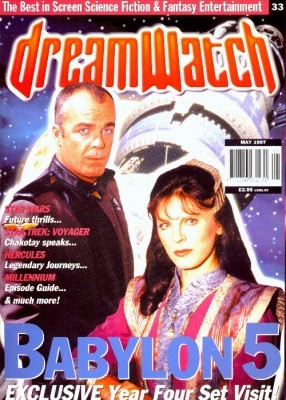 DreamWatch: How did you get the role of Quinn Mallory?

Jerry O’Connell: I was a junior at New York University Film School and I really wanted to get back into acting — I was in a film called Stand By Me. I primarily wanted to do a television series, and if you are an actor trying to do a television series, you end up getting a hundred scripts, ninety-nine of which are pretty bad. When I got the script for the pilot of Sliders it sparked my imagination, and I thought that if this ever went to a series it would be a great show. I could imagine that you could go to all sorts of different worlds, I thought that the possibilities were really limitless. It was at that point that I really wanted to do it, so I worked hard at the auditions. And fortunately, three years later here I am.

What sets Sliders apart from other genre shows?

I think it is the idea of the parallel universes. Every week not only is there a different show, but a totally different universe. It is really impossible for me to get bored about playing the same role: I get to play myself as a double. This gives me a chance to portray a different self. The show is constantly creating new characters. Most television shows you are usually stuck in one place: either an emergency room or a police precinct. On Sliders I have no idea what is going to happen on Monday when I go into work.

Do you think Irwin Allen’s Sixties series The Time Tunnel had any influence on Sliders?

How has Quinn grown through the series?

I think he has grown a lot like I have. When I started doing this show I was nineteen, now I am twenty two. I think those are pretty maturing years for a young man, and I think that Quinn has matured in the same sort of way.

Was this show a struggle initially?

I think for the first couple of seasons we were really trying to figure out what kind of show we were, and what direction we were going to go with it. This season I think we really have found our identity. This has reflected in the kind of shows that we are now doing. This is now a much more consistent show — a lot more fun to work on. I am really pleased with what we are doing in the third, and I hope that we do come back for one more.

How do you think the show has changed?

I think it has become more mature and a lot slicker. And from an employee’s stand point we are doing a lot more stunts and special effects, and they are putting a lot of money into it. I think that the British fans are going to love Sliders. This has become a show that you have no idea what to expect: nothing is predictable. Not only from episode to episode, but scene by scene. It is crazy. It could turn on a dime.

When the show got taken off after the second season, did you think that it would ever be back?

I didn’t. As an actor I am pretty pessimistic; you tend not to worry about these things. You are continually auditioning when you are looking for work. If you get rejected, well then you get rejected. I always take the pessimistic view of everything, so when we got asked back it was a terrific surprise.

Why did they decide to bring it back?

I think that there was a lot of fan outcry on the Internet, which I think helped tremendously.

Do the four of you gel well together?

Very much so. We are as close as it gets. For example: We were working in Vancouver, Canada which does not celebrate American Thanksgiving and couldn’t go home; subsequently we were all feeling homesick. John Rhys-Davies said, ‘Why don’t you all come over to my house after work tonight and we’ll have a little Thanksgiving meal?,’ and we though that would be nice. Nothing was going to be formal or special. We got there, and he has got a twenty five pound turkey on the table, and it was terrific. I had a better time there than if I had gone home.

The best. He has taught me so much about acting it is not even funny. Not only is he a joy to work with from a professional standpoint, but also personally. I think he is such an amiable guy.

Why did you decide to direct?

I attended NYU Film School and when I came back into acting, I originally had the idea that I would end up doing something behind the camera. I thought that perhaps I could use acting as a stepping stone. My original acting training was all theatre. I studied at HB Studios with Herbert Bergoff, and consequently did a few plays with him. So when it was time for me to go to college, I decided that I had done the theatre school: it wasn’t going to get much better than working with Herbert Bergoff. I thought that if I wanted to be an actor, the next step was to go to film school. I went to film school half with the idea that I would end up working behind the camera, and the other half using all the behind the scenes techniques to make myself a better actor in front of the camera.

What can you tell me about your episode?

It is going to be a terrific show, although up to this point it is still untitled. It is sort of a rock and roll vampire type thing. It is going to involve a lot of real techno and industrial music. It will have a very Nine Inch Nails look and feel to it. The show is about these vampires who have been around for centuries — for eternity really — as musicians. They travel from country to country. They could be described as traveling musicians. They used to be gypsies thousands of years ago, they were a doo-wop band in the fifties, and now they are this techno/industrial type band. They use that disguise to travel from town to town on tour.

Has this made you re-appraise your role?

Yes. In some ways it has — not only my character but the show in general. What it really is teaching me is how difficult it really is to produce a television show, because as an actor you only get to see the one side. This gives you a chance to see what the producer and the director are talking about. Also you get to see what a real team effort it is. When you are acting, you are right in the middle of the set, the camera is right next to you. Everything is focused on what you do. In many respects it really is like having a front row seat. It has been a very educational experience for me.

Can Sliders express the human condition in less restrictive ways than other genre shows?

Yes, because it deals with parallel worlds which are constantly changing. One episode is not the same as another. Also I think that like all science fiction, it really is a mirror of society; you are really saying something about society without explicitly commenting on it. Rather like all the good Twilight Zones by Rod Serling. They are all comments about the whole “Red Scare” here in the United States, and McCarthyism. That I think, makes it fun to work in science fiction, and on Sliders I think that we are doing the same. With American television so sensitive to certain issues, you can get away with it by the fact that you are distorting things through this escapist medium.

You have just completed a major two-part story…

The story came from John Rhys-Davies and it is called The Exodus. It is a really dangerous situation: We slide to a world on the verge of the apocalypse, and in the ensuing panic law and order falls apart. They come across a scientist who with Quinn’s help are able to get a group of people off the world by sliding. However, one of our characters doesn’t make the slide away. I won’t spoil it for you. I think the fans are really going to like it.

What was really cool about it is that rock star Roger Daltrey is in it. He plays the villain Colonel Rickman, and that was like a dream come true for me. I can remember waiting a total of twenty-eight hours in line for Who tickets and never gotten them. Now here we are, working for three weeks on location, and I am eating dinner with Roger Daltrey. Every moment I worked with him and every moment I sat with him, I was pinching myself. He was a terrific actor; he played such a good bad guy!

The best part about it was, two weeks into the schedule he said to me, ‘Jerry, I was thinking I’m having such a good time, I was thinking of having a little jam-session for the crew. Do you think that will be cool?’ I was blown away by this request. So we had a fifty person concert with Roger Daltrey. It was unbelievable! Roger Daltrey Unplugged! I was in awe of him, I was bringing him tea every moment I got, so much so, that I know the routine down pat.

Has Sliders success helped you as an actor?

It has helped me a lot. It has been responsible for getting me a few job; I am in Jerry Maguire, which is very exciting. Sliders has got my face out there, and I am very grateful.