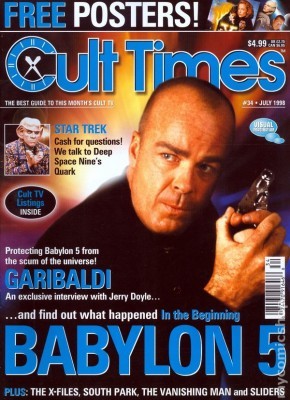 Kari Wuhrer came to the fourth season of Sliders with a mission, to make tough army captain Maggie Beckett into a more likeable human being. The character was first introduced in the show’s third season, in the two-part Exodus, in which Quinn Mallory (Jerry O’Connell), Rembrandt Brown (Cleavant Derricks), Wade Welles (Sabrina Lloyd) and Professor Maximillian Arturo (John Rhys-Davies) found a parallel Earth facing extinction. By the end of Exodus, Arturo was dead, along with Maggie’s husband, and Wuhrer became a regular on the series.

Saddened by the loss of Arturo, some fans were initially critical of the bossy, hardened military woman. Wuhrer herself recognized that the character needed to lighten up, and so the Beckett we meet in the new season is kinder, more caring and much more fun to be with.

“You definitely see a softer and more emotional side to Maggie,” Wuhrer tells Cult Times. “Even though she can still be a tough, strong woman when she’s needed in combat, she’s definitely emotionally well-rounded now. Maggie shows her soft spot for each of the sliders in each of the episodes.”

Asked to highlight stories that she found most rewarding in the fourth year, Wuhrer claims there’s plenty to choose from.

“There’s an episode where my double slides with the rest of the Sliders and I stay back at a military base with my husband’s double. So I get to re-experience him and I show a lot emotionally through that experience.

After three seasons on the Fox Network, the fourth year marks a change in fortunes for the show, which is now made specifically for the Sci-Fi Channel (although Sky is airing the shows first in the UK). No longer shackled by the restraints of a network, the producers have re-tooled the series to appeal to more hardened Sci-Fi fans. Sliders now has an ongoing story arc, as the sliding Kromaggs have invaded Earth Prime, and Quinn must locate his Earth Prime in order to defeat them.

I think this series is better than ever,” Wuhrer enthuses, “because we’ve relied less on special effects and we’ve given more thought to characters and story. We’ve made it more of a show about how the human condition is affected by these parallel universes.

“We now rely on good writing and creative storytelling to present the Sci-Fi circumstances. Instead of seeing a bunch of computer effects that sometimes take you out of the story because the suspension of disbelief is a little funny, we’re dealing with mostly now with human situations and characters. It’s like how Sci-Fi used to be before we had all kinds of computer stuff. I like that a lot.”

The show is also a lot funnier, mainly thanks to the addition of Colin Mallory (Charlie O’Connell), a naive innocent who hails from a parallel Earth where humans all live in Amish communities.

“We’re doing episodes now that are allowing the humor to come out more then ever,” says the actress. “I think when we were on network television, we were always afraid that the genre was going to get confused, but now that we’re on cable we have more freedom, more creative input as actors, and with Jerry (O’Connell) as a producer, we’re playing with that more. I think Colin’s character has a lot of funny stuff
in every episode, he just plays his character that way, and you get more from each show.

“We did five shows without Charlie at the beginning of the season and it was great,” Wuhrer offers. “We really got to explore each character’s history a little bit more and their relationship together. When there’s three people in a show there’s a lot more time to explore that than where there’s four. I was really afraid that when Charlie came we were going to lose that, and yes, it’s taken a turn, and things have changed since he’s come to the show. We did lose a little bit of that, but we also gained this wonderful character that we’ve learned a lot about. So we didn’t lose much; we gained a lot more. He’s added a comedic element to the show that is really great.”

Like Star Trek, Sliders is at its best when the writers embrace social commentary within scripts. So far this year we’ve seen allegories of evangelism and drug abuse, and many more episodes will confront issues that our world faces.

“In this particular episode we’re shooting right now (My Brother’s Keeper), we take a look at the whole cloning thing. On this world, they clone humans for body parts, so if I go blind I’ve got a clone who lives in relative seclusion. She’s a second class person, cloned for the purpose of giving body parts to the primary humans. It kind of takes a twist on what is going on now in the scientific community.”

Has the actress submitted any of her own ideas for stories? “I actually brought up a story idea at the very beginning of the season and then realized that I had to write it all out, and there was too much going on to do that,” she laughs, “I’m just too lazy to write up my synopsis and my treatment. It’s too late now, so I have to do that next season. Jerry’s story got made into a script on the last show we shot; it was a western, which was kind of fun.”

A talented performer with plenty of range, Wuhrer initially began her career as a presenter on MTV, before becoming a singer, and then acting in movies. She’s played opposite Jack Nicholson in The Crossing Guard, appeared as a gypsy in Stephen King’s Thinner and got chomped by a giant snake in Anaconda.

“I’ve always been involved in Sci-Fi types of things,” she reveals. “My first movie was Beastmaster II. People love it, and to me, I fit right in there. OK, maybe I’m not starring in Jerry Maguire II or anything, but I’m really happy where I am. I love it.”