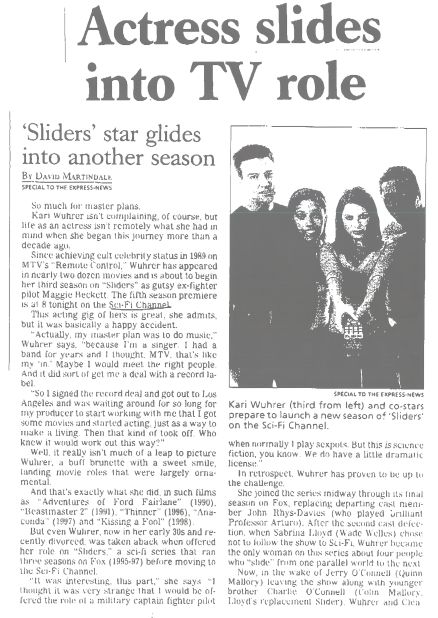 San Antonio Express, David Martindale, June 11, 1999 — So much for master plans. Kari Wuhrer isn’t complaining, of course, but life as an actress isn’t remotely what she had in mind when she began this journey more than a decade ago.

Since achieving cult celebrity status in 1989 on MTV’s Remote Control, Wuhrer has appeared in nearly two dozen movies and is about to begin her third season on Sliders as gutsy ex-fighter pilot Maggie Beckett, The filth season premiere is at 8 tonight on the Sci-Fi Channel

This acting gig of hers is great, she admits, but it was basically a happy accident.

“Actually, my master plan was to do music,” Wuhrer says, “because I’m a singer. I had a band for years and 1 thought. MTV, that’s like my in. Maybe I would meet the right people. And it did sort of get me a deal with a record label.

“So I signed the record deal and got out to Los Angeles and was waiting around for so long for my producer to start working with me that I got some movies and started acting, just as a way to make a living. Then that kind of took off. Who knew it would work out this way?”

Well, it really isn’t much of a leap to picture Wuhrer, a buff brunette with a sweet smile, landing movie roles that were largely ornamental. And that’s exactly what she did in such films as Adventures of Ford Fairlane, Beastmaster 2, Thinner, Anaconda, Kissing a Fool.

But even Wuhrer, now in her early 30s and recently divorced, was taken aback when offered her role on Sliders a sci-fi series that ran three seasons on FOX (1995-97) before moving to the Sci-Fi Channe. “It was interesting, this part,” she says “I thought it was very strange that I would be offered the role of a military captain fighter pilot when normally I play sexpots, But this is science fiction, you know, we do have a little dramatic license.”

In retrospect, Wuhrer has proven to be up to the challenge. She joined the series midway through its final season on Fox, replacing departing cast member John Rhys-Davies (who played brilliant Professor Arturo). After the second cast defection, when Sabrina Lloyd (Wade Welles) chose not to follow the show to Sci-Fi, Wuhrer became the only woman on this series about four people who “slide’ from one parallel world to the next.

“When I got here,” she says. “I was like I felt first I had to prove myself and carve a niche in this genre and, second, yeah, try to measure up lo John Rhys-Davies, which is definitely a tough one. But I really enjoy it.”

When the fifth season opens, Wuhrer and Derricks will he teamed with two new Sliders played by Robert Floyd and Tembi Locke  while Babylon 5 -ex Peter Jurasik is added in a recurring villain role of evil genius Dr. Geiger.

Although no announcement has been made one way or the other, the shows future beyond season five is uncertain.

And if the forthcoming 18 episodes, almost all of which already have been filmed, is all that remains of the series, one of Wuhrer’s wishes won’t come to fruition.

“I wanted to change to a kind of cyberpunk Maggie, but the producers weren’t interested,” she laments. “I was thinking, well, she gets so deep into sliding now that she has sort of adopted a few of the styles she’s encountered from past slides. And it seemed like a natural follow-up to last summer and that kind of comic book effcct with the blue hair. But the executive producer wanted a more natural look, so my hair’s longer, it’s lighter and it’s a little less harsh.”

Such matters might seem wholly superficial, but Wuhrer says her appearance was a hot discussion topic among ‘Sliders fans on the Internet this past season, so it has to be taken seriously.

Despite her success in the acting field, though, Wuhrer’s ambition to have a singing career never waned And now, nearly a decade after that initial record deal went sour, she finally has something to show for her efforts.

Her alt-pop CD, Shiny (Del-Fi Records), was released in February and is far more ambitious and skillfully done than skeptics might assume. This was not just a sad example of a deluded actress moonlighting as a wannabe rocker,

‘It took a lot longer than I expected it would,” she says. “But I’m back into the music and now I’m doing it all and loving it.”