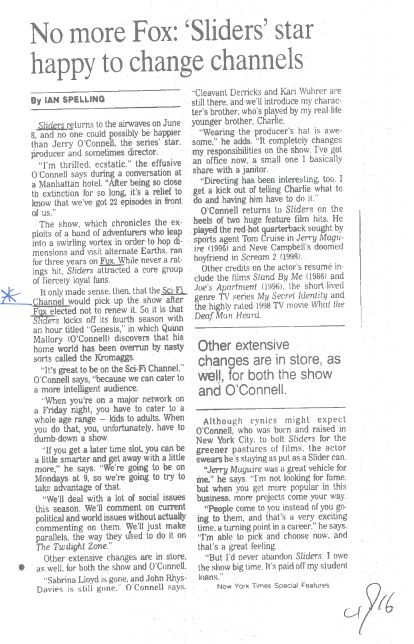 Houston Chronicle, Ian Spelling, May 23, 1998 — Sliders returns to the airwaves on June 8, and no one could possibly be happier than Jerry O’Connell the series’ star, producer and sometimes director.

“I’m thrilled, ecstatic.” the effusive O‘Connell says during a conversation at a Manhattan hotel. “After being so close to extinction for so long, it’s a relief to know that we’ve got 22 episodes in front of us.”

The show, which chronicles the exploits of a band of adventurers who leap into a swirling vortex in order to hop dimensions and visit alternate Earths, ran for three years on FOX. While never a ratings hit, Sliders attracted a core group of fiercely loyal fans.

It only made sense, then, that the Sci-Fi -Channel would pick up the show after Fox elected not to renew it. So it is that Sliders kicks off its fourth season with an hour titled “Genesis,” in which Quinn Mallory (O’Connell) discovers that his home world has been overrun by nasty sorts called the Kromaggs.

“it’s great to be on the Sci-Fi Channel,” O’Connell says, “because we can cater to a more intelligent audience. “When you’re on a major network on a Friday night, you have to cater to a whole age range – kids to adults. When you do that, you, unfortunately, have to dumb-down a show. “If you get a later time slot, you can be a little smarter and get away with a little more,” he says.

“We’re going to be on Mondays at 9, so we’re going to try to take advantage of that. We’ll deal with a lot of social issues this season. We’ll comment on current political and world issues without actually commenting on them. We’ll just make parallels, the way they used to do it on The Twilight Zone.”

Other extensive changes are in store, as well for both the show and O’Connell. “Sabrina Lloyd is gone, and John Rhys-Davies is still gone.” O’Connell says. “Cleavant Derricks and Karl Wuhrer are still there, and well introduce my character’s brother, who’s played by my real life younger brother, Charlie.

“Wearing the producers hat is awe-some/’ he adds. “It completely changes my responsibilities on the show. I’ve got an office now, a small one I basically share with a janitor.

“Directing has been interesting, too. I get a kick out of telling Charlie what to do and having him have to do it.”

O’Connell returns to Sliders on the heels of two huge feature film hits. He played the red-hot quarterback sought by sports agent Tom Cruise in Jerry Maguire and Neve Campbell’s doomed boyfriend in Scream 2. Other credits on the actor’s resume include the films Stand By Me, Joe’s Apartment and the short lived genre-TV series My Secret Identity and the highly rated 1998 TV movie What the Deaf Man Heard.

Although cynics might expect O’Connell, who was born and raised in New York City, to bolt Sliders for the greener pastures of films, the actor swears he’s staying as put as a Slider can. “Jerry Maguire was a great vehicle for me,” he says. Tm not looking for fame, but when you get more popular in this business, more projects come your way.

“People come to you instead of you going to them, and that’s a very exciting time, a turning point in a career.” he says. Tm able to pick and choose now, and that’s a great feeling.