On An Upward Slide 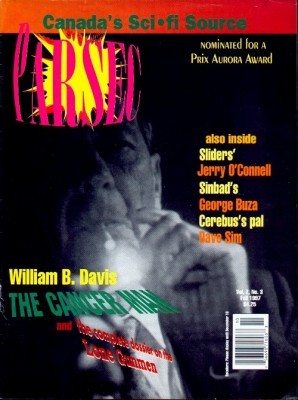 Jerry O’Connell is as high as a science fiction fan who just got invited to William Gibson’s house for dinner and a bit of Internet surfing and he wants everyone to know it.

He’s got good reason to be pleased. At age 11, O’Connell starred in Stand By Me, director Rob Reiner’s film adaptation of a Stephen King short story. He celebrated 12 years in the acting business with his directorial debut on an episode of Sliders and he couldn’t have been happier.

After two years of others directing Quinn Mallory’s adventures on one alternate earth after another, O’Connell got to take over the director’s chair during the show’s third season.

O’Connell’s debut as a Sliders director was the episode Stoker, in which Quinn and his friends end up on an Earth where vampires exist. As with some of the traditional speculative themes in other episodes, O’Connell’s episode became more than just a rehashing of Dracula. The twist of the adventure was that the Sliders encounter a group of rock n’ roll vampires who have formed a band and are traveling around from town to town.

“They pick up their prey while they’re on tour,” O’Connell explained.

Before he signed on for Sliders, O’Connell had already made a name for himself in the business, first with appearances in television commercials and in series such as My Secret Identity.

Then there were movies like Stand By Me and Calendar Girl, and the title role in Joe’s Apartment — based on the MTV video short of the same name, about a young man who finds himself sharing a tenement apartment with a horde of dancing and singing cockroaches. More recently, O’Connell appeared in Jerry Maguire as Frank Cushman, a star quarterback pursued by Cruise’s character.

In between his early television and movie roles and his current stint on Sliders, O’Connell attended New York University. He graduated in 1995 with a major in film and television. Like many actors, O’Connell has had a hankering to try his hand at directing and film school just whetted his desire.

So why this particular episode of Sliders?

“I wanted to do something hip and young and what better than this?”

He described the vampire episode as an extended music video, “only a little darker” with the addition of the undead. Stoker featured Vancouver actor/comedian Tommy Chong as a vampire hunter.

At the time of the interview, O’Connell was five days short of his 23rd birthday. The time seemed right for trying his hand at directing.

“I always had the idea I wanted to direct and what better way than in such a familiar setting.

“I’ve been in a pool and was familiar with everyone on the set,” he said. “I’ve been waiting for this for a long time.”

O’Connell added that there are certain advantages to being both the actor performing in a scene and being the director observing the scene.

“The nice thing about acting is you’re right there in the middle of the set. It’s a pretty comfortable place to direct from. You can see all the action happening around you and you can correct any mistakes.”

Sliders was one of the first projects for O’Connell after he graduated from film school. He’d decided that a role in a television series was the best way to get back into acting and ended up looking over hundreds of scripts for various proposed television series.

“Sliders was really the only one I read that I really wanted to do.”

Like his fellow regulars on the series, Sabrina Lloyd and Cleavant Derricks, O’Connell was intrigued by the premise for the series, journeying to parallel worlds.

“The possibilities were endless. It really sparked my imagination. I think that’s partly the appeal from the viewer’s perspective. It’s a different world every week.”

O’Connell gets a great deal of feedback about the series, especially about its alternate Earths premise, when he goes online to skim some of the chat rooms on the Internet and to talk with Sliders fans and viewers of the show.

“I try to answer as many questions as possible.”

When Sliders first began, O’Connell saw a lot of parallels between himself and Quinn Mallory. Both were in their early 20s, who had found themselves in a “crazy situation,” as O’Connell put it.

Mallory’s was his serendipitous discovery of a portal allowing access to other Earths and his adventures in those alternate realities. O’Connell’s was learning to deal with the eventual success of the series once it finally took off.

“He (Quinn) was not ready for it and it was totally unexpected. Somewhat like Sliders. Its success was unexpected.”

Since then, O’Connell observed, the series has become more slick, with more use of special effects like the ones used in Dragonslide and Electric Twister Acid Test to depict some of the parallel worlds.

During his three-plus seasons, the character of Quinn Mallory has evolved since he first began sliding between worlds.

“A lot like I have, I think,” O’Connell remarked.

Where Mallory was unprepared at the start of the series for the reality of sliding, now he too has developed an edge in his personality after having learned to deal with the unexpected so much of the time. O’Connell believes that he has also grown and developed as an actor and a person.

“Over the past three years, I have become more ready to expect the impossible. It’s been a learning experience.”

While sliding may have helped temper Mallory’s personality, it also seems to have taken something from him through the various situations the character has himself in. O’Connell agrees that Mallory has lost some of his innocence through his adventures.

“It’s part of the education sliding has given him. It’s not only matured him, it’s aged him.”

O’Connell notes that series’ writers have picked up on that aspect of the character and plan to explore it further.

Another parallel between the series and real life is the close relationship between the four Sliders.

“We are very close.”

O’Connell recalls a time during November of the second season that illustrates this closeness. The American members of the cast were feeling homesick. For them, it was getting close to Thanksgiving. John Rhys-Davies, seeing how depressed the others were, invited them over to his place for dinner. When they arrived, O’Connell said, waiting for them was an 11-kilogram turkey which Rhys-Davies had cooked and readied for carving.

“It was totally unexpected,” O’Connell said. “We are like a newly-formed family. We’ve been together so long (as character and as people) that it’s a good time. We’re constantly joking around. It’s a party on the set.”

Whether in Vancouver or Los Angeles, the time involved in shooting a Sliders episode remains the same.

O’Connell and the rest of the cast go through about 10 pages worth of script per day over a seven-day shooting schedule for each episode. By comparison, work on a movie project like Jerry Maguire moves at a snail’s pace with perhaps two pages of script shot in a day.

“It (Maguire‘s schedule) is really nice and relaxing and you get to work out all the kinks and nuances.”

But O’Connell also enjoys the pressure that episodic television demands.

He’s also looking forward to more opportunities to exercise his directing skills which was always one of his goals in film school.

Away from the camera, he’s also stretched his creative skills by scripting an issue of the Sliders comic book — an exercise he described as “like writing a little film/” He considered and planned particular scenes for each panel of art, worked out the dialogue and dealt with other facets of comic book storytelling. He found many similarities in the creative effort behind writing, acting and directing.

While he won’t rule out the possibility of perhaps trying his hand again at writing, O’Connell figures that for now he’ll focus more on further honing his acting skills and broadening his directing résumé.

Whether he makes the trek back north or not, either as a guest or a featured player in a Vancouver-or-Toronto-based series, O’Connell is quite happy to continue growing old for awhile longer as Quinn Mallory — just as long as there are new and interesting worlds to see.

“It’s impossible to get bored on Sliders,” he added.