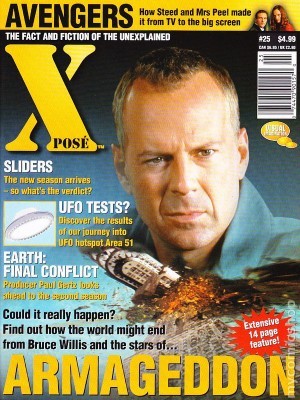 Marc Scott Zicree, executive story editor on the quirky SF drama Sliders, admits that he likes alternative universe stories. “Mirror, Mirror, was one of my favorite Star Trek episodes when I was a kid, so to be able to do a series with that idea is great fun.”

Now on its fourth season, the story of Sliders began when young scientist Quinn Mallory (played by Jerry O’Connell) created a device that could open a portal between worlds; alternate versions of Earth, where the Nazis won World War II, or Columbus didn’t discover America until years later. Taking along his friend Wade Welles (Sabrina Lloyd) and collage professor Maximillian Arturo (John Rhys-Davies), Quinn decides to travel to one of these worlds, along with down-on-his-luck singer Rembrandt Brown (Cleavant Derricks), who’s accidentally pulled into the vortex on their first trip. When the device malfunctions, the four travelers find themselves unable to return to their own Earth, and are forced to ‘slide’ from one alternate world to another, hoping eventually to find their way home.

Along the way, that original group of sliders would change considerably. In the two-part episode Exodus, Arturo is killed, replaced by tough military officer Maggie Beckett (Kari Wuhrer) whose world has now been destroyed. Wade would be gone by the beginning of season four, captured by the bestial, dimension-hopping Kromaggs, and the most recent addition to the group was Colin Mallory (Charlie O’Connell), Quinn’s long lost, other-dimensional brother, who comes from a less technologically-based, agrarian world. That’s the group as it stands now, sliding into the fourth season.

In many ways, Marc Zicree was perfectly suited to a series like Sliders. The author of the best-selling The Twilight Zone Companion, Zicree had already worked on a number of genre series, including Star Trek: The Next Generation, Babylon 5, Deep Space Nine and Beauty and the Beast when he was contacted by Sliders executive producer David Peckinpah.

“I’d been executive story editor on Beyond Reality for two seasons, so the USA cable people knew me, so my agent contacted David, he liked my writing, and it was clear that I really knew the genre. I went off to New York on some business, and when I came back, they had made an offer.

“My knowledge of the science fiction genre has helped a lot, because I can come up with ideas where I know what will be hackneyed and what will be fresh. Then Chris Black is really good with story, and Bill Dial, our co-executive producer, is very good with comedy, and that brings a lightness and a satire to the episodes, and David manages it and oversees all of us in terms of our skills. If I’m stuck for a joke, Bill will come up with something and it will be genuinely funny. On the other hand, if there’s a structural turn, of if we need something in the fourth act that’s a surprise, I can come with that stuff fairly readily.”

According to Zicree, his main contribution to the series is bringing in the so-called ‘weirdo science fiction concepts.’ “My goal with every script I write,” he explains, “is to write a script I’ve never seen before. For instance, World Killer, the first episode I did for Sliders, involves a world where a duplicate Quinn builds a sliding device without knowing what it does and when he throws the switch, a slide wave surges out and sends everyone else on the Earth away, so he’s the last man on Earth. He thinks he’s disintegrated everybody, so he’s been wandering around for three years as the last man on Earth, and when our guys get there, they say, ‘No no, you sent them somewhere, and now we just have to rebuild your machine and duplicate your experiment.’ They do that, and slide to another alternate Earth, where in an instant three years ago, the population doubled, so we see what that would be like, and we have to deal with the moral ramifications of whether we have the ability or the right to slide half the population back. That’s something I’ve never seen done before, and it’s also a story that requires a science fiction element.”

Zicree was well aware that Sliders creator Tracy Tormé was dissatisfied with many of the episodes last year, and in fact left the series in disgust midway through season three. “One of the first things I did when I knew I was going to be on this job,” claims Zicree, “was to talk with Tracy. We had a long talk and I said, ‘Okay, what don’t you like? Tell me your viewpoint,’ and I think that it was very helpful. I think Tracy is very talented and created a really good show.

“The other thing I’m doing is going to conventions and asking fans what they like. It was very useful going to the last Worldcon, because I was able to sit down with the fans and say, ‘Okay, tell me what you don’t like about the show,’ and they told me what they liked and didn’t like, and in many cases, it agreed with what we on the staff felt, so the fans were very gratified that we were in dialogue with them.”

Among the changes the Sliders team made this season was putting back some of the humorous and satirical elements, which began to disappear in the show’s second season. They’ve also changed the group dynamics, eliminating most of the bickering between characters and making the sliders a foursome that finally gets along. “When I watch the episodes from last season,” says Zicree, “I was really not pleased. They were dark, they were movie rip-offs, the characters were all bitching at each other; a lot of mistakes were made, and fortunately, we were all in agreement this year as to what we needed to do to resuscitate the show, and basically, the idea was to do stories that are original, that deal with our main characters, that are fun and will bring the lightness back into the show. There are a few dark episodes, but a lot of them are very funny and very satirical and have a lot of social commentary, and the characters are also much more supportive of each other and much more loving and compassionate.

“The character of Maggie works really well now, and we’ve brought Colin aboard, played by Charlie O’Connell so we’ve now got four characters that we all like writing for. Charlie’s character Colin being an innocent, we’re sort of patterning him after Meet John Doe, the character that Gary Cooper played; he has that same naive quality. I think the fans got very turned off by the end of last season, because many of the episodes were not good, they were not well-structured. Now, we’ve got good stories and good acting, and we’re very happy about that.”

Zicree also gives a good deal of credit for the behind-the -scenes chemistry to star Jerry O’Connell, whose involvement in the series is even more pronounced this season. “Jerry is a wonderful guy, he’s a hard worker, he’s smart he’s funny and he’s a real team player. Here’s a guy who can go off and be a movie star; he doesn’t need to be doing Sliders. He was in Jerry Maguire and Scream II which were huge hits; he hardly needs to be doing Sliders, but he’s doing it because he loves the show, and brings an enthusiasm to it. He and his brother Charlie love each other, so there’s an enormous affection which comes through on screen. He also has an affection for Cleavant and Kari, so they’re all friends and there’s a very real affection there.

“When Jerry approaches direction, he comes into it with an enthusiasm and supportiveness. He’s also very open to ideas and suggestions, and when he came up with this outline for an episode called Way Out West, I read it and it was really good; if it had been a freelance story that someone had pitched, we would have bought it even if it hadn’t been Jerry O’Connell. It was good, and it had two notions within it that we hadn’t done before but were really fun. He did the outline, but being aware that he’s starring in the show and also directing some episodes, he didn’t insist on writing the script, so Chris Black wrote the teleplay. Again, that was Jerry being smart and not being a prima donna but being a team player and letting everyone work to their best advantage.”

Although the Sliders budget was reduced in its move from the Fox Network to the Sci-Fi Channel, Zicree insists there hasn’t been a single story that couldn’t be done this season for reasons of costs. “The budget is lower, but we can still do FX and action and alternate worlds; we don’t feel limited or constrained at all. You just have to be very inventive; for instance, as soon as I heard that Timecop was canceled, I walked over to the soundstage and sets and said, ‘These are great!’ and created a story specifically for those sets, which looked like a million dollars.”

According to Zicree, “You don’t want the tail wagging the dog; you want the FX to support the story. For instance, in Slidecage, they get to a place they can’t slide out of, this labyrinth structure on an alternate Earth where the atmosphere is radically different and you can’t go outside. So it’s basically the prisoners running the prison, and there are Kromaggs, there are humans and it’s very nasty. They’re wandering around trying to figure out where they are, they look out a window and see an alien terrain. That will be a computer-generated image, but it serves the story, which is about a group of characters in this pressure cooker situation. Then you always look for how does this open up our characters, and how do we explore them in a new way?”

In addition to his work on Sliders, Zicree is also pitching a new genre series of his own, called Magic Time. An epic post-apocalyptic fantasy series, where magic replaces modern technology, Magic Time has already been sold as a three-book deal to Harper-Collins, and Zicree hopes to sell the project as a television series.

“We’re currently hammering out an option agreement where we’ll be able to pitch it places like UPN and Turner and so forth and hopefully setting up. I’m absolutely certain that Magic Time could be a major franchise, along the lines of Babylon 5 or Star Trek. No one has done a modern-day fantasy like this before and I think people are ready for it.”

The future of Sliders remains uncertain for the time being. The series actually production before its first episodes air in the United States, which means the jury is still out, both ratings-wise and in terms of viewer response. “In a way, we’ve had some feedback, because the show has already been on the air , so I was able to meet with the fans and say, ‘Tel me what you hate about the show,’ which was very useful.

“We won’t have feedback on the episodes we’ve already done,” says Marc Zicree, “but I think the fans will really like them. Either you’re doing a show like Beyond Reality where you’re not getting a lot of feedback anyway even though it’s a wonderful show, or when I was story editing Friday the 13th, we had a long lead time on that too, so we didn’t know what the response was. You just have to think about what you think would be cool and gets you jazzed up and go with that. I think people will say, ‘Good job,’ and if they don’t, then we’ll have to look at what we’re doing.”