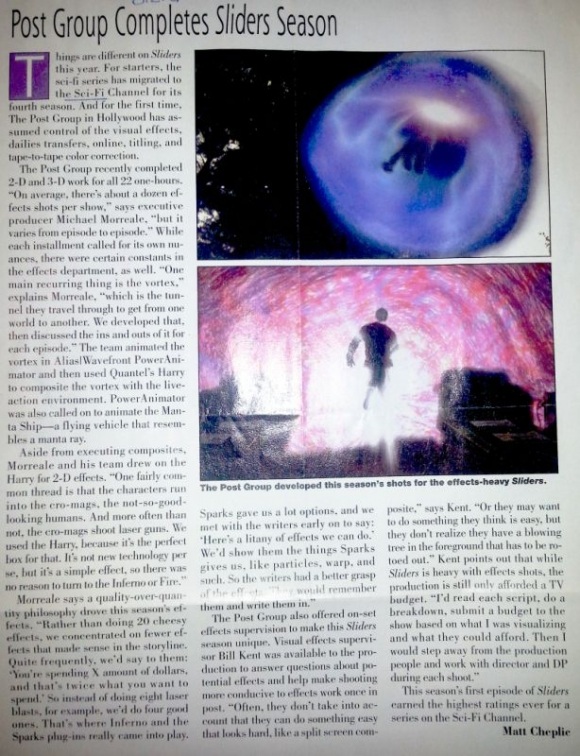 Millimeter Magazine, Matt Cheplic, August 1998 — Things are different on Sliders this year. For starters, the sci-fi series has migrated to the Sci-Fi Channel for its fourth season. And for the first time, The Post Group in Hollywood has assumed control of the visual effects, dailies transfers, online, titling, and tape-to-tape color correction.

The Post Group recently completed 2-D and 3-D work for all 22 one-hours. “On average, there’s about a dozen effects shots per show,” says executive producer Michael Morreale, “but it varies from episode to episode.” While each installment called for its own nuances, there were certain constants in the effects department, as well.

“One main recurring thing is the vortex,” explains Morreale, “which is the tunnel they travel through to get from one world to another. We developed that, then discussed the ins and outs of it for each episode.”

The team animated the vortex in Alias Wavefront PowerAnimator and then used Quantel’s Harry to composite the vortex with the live-action environment. PowerAnimator was also called on to animate the Manta Ship — a flying vehicle that resembles a manta ray.

Aside from executing composites, Morreale and his team drew on the Harry for 2-D effects. “One fairly common thread is that the characters run into the Kromaggs, the not-so-good-looking humans. And more often than not, the Kromaggs shoot laser guns. We used the Harry, because it’s the perfect box for that. It’s not new technology per se, but it’s a simple effect, so there was no reason to turn to the Inferno or Fire.”

Morreale says a quality-over-quantity philosophy drove this season’s effects. “Rather than doing 20 cheesy effects, we concentrated on fewer effects, ones that made sense in the storyline. Quite frequently, we’d say to them: ‘You’re spending X amount of dollars, and that’s twice what you want to spend. So instead of doing eight laser blasts, (or example, we’d do four good ones. Thai’s where Inferno and the Sparks plug-ins really came into play.

“Sparks gave us a lot options, and we met with the writers early on to say: ‘Here’s a litany of effects we can do.’ We’d show them the things Sparks gives us, like particles, warp, and such. So the writers had a better grasp of the effects and would remember them and write them in.”

“Often, they don’t take into account that they can do something easy that looks hard, like a split screen composite,” says Kent. “Or they may want to do something they think is easy, but they don’t realize they have a blowing tree in the foreground that has to be rotoscoped out.” Kent points out that while Sliders is heavy with effects shots, the production is still only afforded a TV budget.

“I’d read each script, do a breakdown, submit a budget to the show based on what I was visualizing and what they could afford. Then I would step away from the production people and work with director and DP during each shoot.”

This season’s first episode of Sliders earned the highest ratings ever for a series on the Sci-Fi Channel.