Return of Sliders again proves fans can make a difference 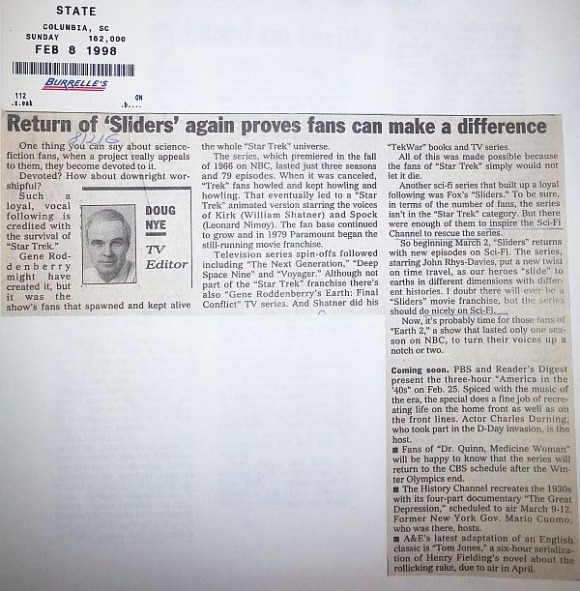 Columbia State, Doug Nye, February 8, 1998 — One thing you cam say about science-fiction fans, when a project really appeals to them, they become devoted to it.

Devoted? How about downright worshipful?

Such a loyal, vocal following is credited with the survival of Star Trek.

Gene Roddenberry might have created it, but it was the show’s fans that spawned and kept alive the whole Star Trek universe.

The series, which premiered in the fall of 1966 on NBC, lasted just three seasons and 79 episodes. When it was canceled, Trek fans howled and kept howling and howling. That eventually led to a Star Trek animated version starring the voices of Kirk (William Shatner) and Spock (Leonard Nimoy).

The fan base continued to grow and in 1979 Paramount began the still-running movie franchise.

Television series spin-offs followed including The Next Generation, Deep Space Nine and Voyager. Although not part of the Star Trek franchise there’s also Gene Roddenberry’s Earth: Final Conflict TV series. And Shatner did his TekWar books and TV series.

All of this was made possible because the fans of Star Trek simply would not let it die.

Another sci-fi series that built up a loyal following was Fox’s Sliders. To be sure, in terms of the number of fans, the series isn’t in the Star Trek category. But there were enough of them to inspire the Sci-Fi Channel to rescue the series. So beginning March 2, Sliders returns with new episodes on Sci-Fi. The series, starring John Rhys-Davies, put a new twist on time travel, as our heroes “slide” to earths in different dimensions with different histories. I doubt there will ever be a Sliders movie franchise, but the series should do nicely on Sci-Fi.

Now, it’s probably time for those fans of Earth 2, a show that lasted only one season on NBC, to turn their voices up a notch or two.