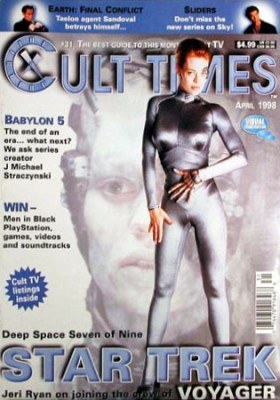 Few shows have suffered more at the hands of television executives than Sliders. After two modestly successful half-seasons of nine and 13 episodes respectively, the offbeat SF comedy-drama suddenly won the favour of the Fox Network, who decided that the series had the potential to become one of its biggest hits and commissioned Universal to produce a full 25-episode third season. Unfortunately, to fulfill its enormous potential, Sliders would have to be revamped — big time. Consequently, when the show’s third season premiered in September 1996, viewers were treated to an action-adventure series which bore little resemblance to the show’s earlier offerings.

More than a year after Sliders‘ relaunch, Tracy Tormé is still appalled by the changes Fox made to the series he co-created with Robert K. Weiss. “We lost all the humor in Season Three,” he explains. “Nothing funny happens. The really got into ripping off movies: it’s openly admitted that 15 of the 25 shows are just The Island of Doctor Moreau or Twister or Nightmare on Elm Street or whatever. And the reason why they’re open about it is that nobody really cared about the show. That’s the part that really gets me angry.

“I really do feel badly, guilty even, about the show that was put out in the third season,” he admits. “I feel like we hooked people and then they were slapped in the face! And that’s very sad.”

Tormé and Weiss originally devised Sliders as “a very unique blend of Science Fiction and social satire,” and successfully realized their vision as the executive producers of the show’s first two seasons. From day one, however, the powers-that-be at Fox were unhappy with their concept of the series.

“Basically, the network was never comfortable with the show because they couldn’t put it in a box — they couldn’t really say exactly what it was,” Tormé claims. “So they were always working us to make the show more simplistic, more action-oriented and less thought-provoking.

“Also, with an idea like Sliders, there are so many things you could do with it. But we were so restricted — the wildest ideas we had were always the ones that were immediately tossed aside [by Fox].

“So during the first two seasons, we did the shows we wanted to do subversively,” he reveals. “We found ways to ignore the network’s notes and stubbornly go in the direction we wanted to go in.”

Tormé points to the show’s pilot, The King is Back, Summer of Love, Invasion, Post Traumatic Slide Syndrome and Gillian of the Spirits as examples of Sliders as its best. “I put a lot of my heart and soul into those episodes. But I like all the shows we did in the first two seasons, with only one or two exceptions.”

Unfortunately, while Tormé managed to circumvent most of Fox’s decrees during the show’s first two years, the situation in Season Three was rather different. As the only senior member of the production staff who had been with the series from the beginning, Tormé was alone in wanting to keep Sliders‘ darker and more satirical elements. Consequently, at the behest of Fox, the show was reborn in Season Three as a family-oriented action-adventure piece.

Not content with transforming Sliders‘ format, the network also ensured that the series’ leading characters were given a complete overhaul. “Each of the four characters were politically corrected,” Tormé elaborates. “Quinn [Mallory, played by Jerry O’Connell] originally was a misfit who was embarrassed about his genius and hid it away… he was a long-haired guy who wore jeans and flannel shirts, and didn’t have a clue about women. Well, by the time the third season rolled around, he was like a GQ model and a James Bond-type figure!

“Wade [Welles, Sabrina Lloyd] went from being the mousey girl next-door with a lot of insecurities to sort of a super-feminist — an aggressive, ‘give me what I want’-type of woman.

“The Crying Man [Cleavant Derricks] especially was sanitized, and lost all of the show business trappings. Part of the reason for that was that I wrote a lot of music for the show and a lot of his humor, and when I left, no one on staff could write that kind of stuff. So he became an action hero, basically.

“And finally [John] Rhys-Davies’ character [Professor Maximillian Arturo], well that was more his fault than the network,” Tormé clarifies. “John just wanted the show to be ‘Arturo and friends go sliding’ — he basically wanted to be the lead character, with Quinn learning from him as they went along. That was never how it was devised. If you look at the pilot or the first episodes, that character had a lot of darkness: he has an ego that’s out of control and he’s kind of insecure in many ways.”

Just as the characters altered dramatically in Season Three, so too did their relationships with one another. This development was particularly irritating to Tormé. “When I worked on Star Trek [The Next Generation], my complaint was that everybody always agreed with everybody else 24 hours a day. I wanted to do a show where there were four characters with four different viewpoints who didn’t necessarily always get along. But by the time the third season was done, they were all peas in a pod!”

Frustrated by the extensive modifications made to the series, Tormé decided to jump ship in the middle of the season, once his contract expired. As a parting gift, he wrote one of the year’s most popular episodes, The Guardian. “I was really pleased with it,” he says, “and anyone who watched it knows that it’s just completely different from the rest of the season. It’s a throwback to the first two seasons.”

Undeterred by his experiences on Sliders, Tracy Tormé is currently developing a number of new TV projects, including another SF series, Higher Power, a horror show called The Shadowman and Kung Pow, an MTV comedy slated to star Babylon 5‘s Ed Wasser.

Nevertheless, Tormé is well aware that the Sliders story isn’t just over yet. The show’s fourth season is currently in production for the Sci-Fi Channel and will début later in the year. Although he declined an offer to work on the series, Tracy Tormé is cautiously optimistic about what viewers can expect of Sliders‘ new season.

“Apparently, they’re going to do character-driven stories again,” he reveals, “and they claim they want to go back to the origins of the show and what I started. Whether they pull it off or not, I really am going to find out pretty much at the same time as the rest of the world. If they do, I’ll be quite happy and I’ll look at Season Three as an aberration.”