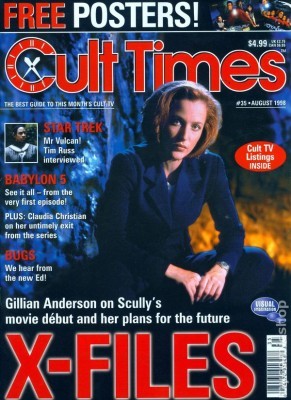 With four seasons of the quirky SF series Sliders under his belt, Jerry O’Connell has seen nearly as many changes as Quinn Mallory, the character he plays. “It’s really just Cleavant [Derricks, who plays Rembrandt] and I who have stuck around from the very beginning,” reflects O’Connell. “At one point, we realized, ‘Wow, we’re the only two left around here!”‘ John Rhys-Davies, who played Quinn’s mentor Professor Arturo left the series halfway through the previous season, replaced by Kari Wuhrer as Captain Maggie Beckett, and Sabrina Lloyd (Wade Welles) decided not to sign up for the new season. Her replacement was O’Connell’s real-life brother Charlie, who plays Quinn’s newly-discovered brother, Colin. “The great thing about acting is also one of the great things about Sliders, and that’s the fact that it’s constantly changing,” says
O’Connell. “We go to different worlds and it’s a different show every week. It’s not only a different episode, it’s a completely different show, and as an actor, you work for a few months on one gig, and then you move on to another.”

In terms of the characters themselves, O’Connell feels the remaining sliders have matured a great deal. “When you do four years of a TV show and you’re working 17 hours a day, it tends to have a maturing effect on everyone. I think like our characters in the show, we’ve all matured a great deal.” That said, does O’Connell feel that later seasons of Sliders became more youth-orientated? “I suspect that the addition of Kari because her character has a military background, the show started to get a lot more action-oriented, but as far as youth-oriented, I don’t think so. It’s really an episode-by-episode measure. Some episodes are much darker than others while some are a lot lighter and sometimes there’s comedy thrown in there as well. The nice thing about doing Science Fiction is that you can mirror society, and you can do that without actually making a statement about it, like some of the good Twilight Zone episodes.”

Although O’Connell has just finished an entire season with Wuhrer and his brother as cast members, the loss of his former co-stars isn’t easily forgotten. “John’s leaving definitely did change it, but Kari was a great addition. She’s not only terrific to work with, but she’s also got the character of Maggie Beckett down. She was a nice addition to the cast, but John is greatly missed. We got along very well, and he taught me a lot about working in film. He was really like a professorial character to me, because I did learn so much from watching him work, and it was a great experience. It came pretty much as a surprise, but it was a mutual agreement that they came up with.”

On the plus side, working with his brother Charlie has been a lot of fun, although O’Connell is quick to make jokes about their relationship, insisting its the first time in his life that his brother can buy the drinks. “In all honesty, my brother is a phenomenal actor. He’s physically got a great presence and when I was thrown the producing bone, and heard that Sliders was going to become more of an odyssey this season — it was sort of becoming about returning home — I jumped at the chance and said, ‘You know, I’ve got a brother, and I think this will be a great opportunity.’ I’ve never had so much fun; it’s like we’re playing downstairs and we can make as much noise as we want without our parents going, ‘Would you shut up down there!'”

The new season of Sliders marks a major turning point for O’Connell, as he takes on additional responsibilities as one of the show’s producers as well as directing several episodes of the new season. “I went to NYU Film School, but it took a lot of lobbying,” he admits. “As I’m very familiar with the Sliders atmosphere and the show — I’ve been with it since its birth — I think it’s going to be a really good stepping stone for me.” As for getting to direct his own brother, “That’ s a little tricky,” he admits, “because we’ll be on set and I’ll say, ‘Charlie, do it like this,’ and he’ll say, ‘Wait a minute, don’t tell me what to do!’ and I’ll say, ‘I’m directing you, you’re supposed to do what I tell you!’ Physically, I’m much stronger than he is, so he pretty much listens to what I say!”

O’Connell’s youthful appearance often belies the fact that he’s been in the business for most of his professional life. As a boy, he was cast as one of the youthful protagonists in Stand By Me, and his career hasn’t slowed down since. “I’m amazed when people recognize me from that,” he laughs with a trace of embarrassment, “because physically I look so different, but the movie really had such an impact on me that sometimes even I don’t realize it. People still come up to this day and say, ‘My God, you were the guy in Stand By Me; that’s my favorite film!’ For me, it was just the memory of a summer; that was the first professional work I’d done. I spent the summer in Oregon filming, and it was a blast.”

O’Connell also spent several seasons as the star of his own series, My Secret Identity, in which he played a teenager with superpowers. “We’d shoot that during the summer up in Toronto, and it was the greatest experience; can you imagine, at the age of 16, having your own TV show? It wasn’t such a big, extravagant show; it was on a much smaller scale than Sliders.”

When the role of Quinn Mallory on Sliders came up, O’Connell slipped into the character as easily as if it had been written specifically for him. Nevertheless, the actor insists that he and Quinn are indeed very different. “I think because they’re both young men, they’re very similar in that sense, but they’re also very different in that Quinn is a physics genius and I’m not even an algebra one genius. I think all actors bring a little bit of themselves to a character, unless they’re playing a really crazy character. That’s another attractive feature about working on Sliders, is that I can create completely different characters. In one of the episodes I played a double who’s like Kurtz from Heart of Darkness so I got to play a really dark character there. I use Quinn as a starting point — I say, ‘Okay, how am I going to make this guy different from Quinn?, The real challenge is the acting, and that’s why it’s such a great job, because it’s so cerebral.”

Pressed for a selection of his favorite Sliders episodes, O’Connell is reluctant to choose, although a few titles finally come to mind. “The two-parter had a lot of action. Kari and I did a lot of our own stunts and she was actually pressuring me to do more, because she was getting very physical on set, and I thought, ‘Well, if Kari’ s getting that physical, I’d better step up a little bit!’ We did a lot of tumbling around, and I thought it looked great. There’s one where we went to a world where 90 percent of the men on the Earth have been wiped out by a virus and the remaining 10 percent are used for breeding purposes only. That was my favorite, because I love that ratio!”

On a more serious note, O’Connell tries to avoid thinking about the business end of Sliders, such as viewing figures and reviews. “As long as I’m able to continue making a show and being on set and part of the creative process, that’s really what drives me.” The actor does concede to going on-line from time to time and answering viewer questions. “SF fans are the best and the worst fans: they’re the best because they are so loyal and they’ll stick by you and keep you on the air, which in the case of Sliders has certainly been true; they’re the worst in the way that you have to be really careful about what you do, because they watch every little detail. We’re constantly analyzing and re-analyzing situations just to make sure we’re not seeing any holes.”

With the latest series of Sliders now being well-received on the Sci-Fi Channel stateside, it appears the series may have a new lease on life. That’s fine with Jerry O’Connell, who’s more than happy with the direction in which his career is headed. “I’d like to go into something a little more comic,” he notes. “After working on Jerry Maguire and dealing with all that comedy, I had such a good time that I think I’m going to get into more comedy. Sliders has been a great stepping stone for me. It’s led to other great things, and it will lead to other great things. It’s been nothing but a joy for me from day one.”