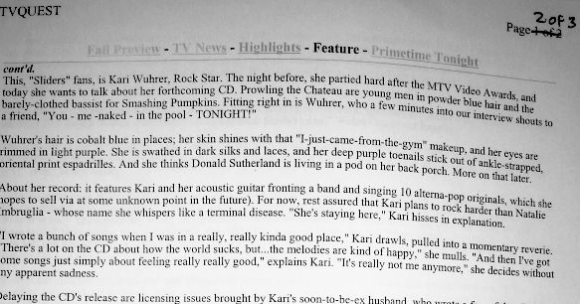 TV Quest, Jessica Wallenfels, October 7, 1998 — She spends her on-screen time as Maggie Beckett slipping through time and space, so what’s Kari Wuhrer, co-star of Sliders, (9 ET Mondays on The Sci-Fi Channel) doing at Chateau Marmont s L.A.’s playpen to the stars? This, Sliders fans, is Kari Wuhrer, Rock Star. The night before, she partied hard after the MTV Video Awards, and today she wants to talk about her forthcoming CD. Prowling the Chateau are young men in powder blue hair and the barely-clothed bassist for Smashing Pumpkins.

Fitting right in is Wuhrer, who a few minutes into our interview shouts to a friend, “You — me –naked — in the pool — TONIGHT!” Wuhrer’s hair is cobalt blue in places; her skin shines with that “I-just-came-from-the-gym” makeup, and her eyes are rinuned in light purple. She is swathed in dark silks and laces, and her deep purple toenails stick out of ankle-strapped, oriental print espadrilles. And she thinks Donald Sutherland is living in a pod on her back porch.

More on that later. About her record: it features Kari and her acoustic guitar fronting a band and singing 10 alterna-pop originals, which she hopes to sell via at some unknown point in the future).

For now, rest assured that Kari plans to rock harder than Natalie Imbruglia — whose name she whispers like a terminal disease. “She’s staying here,” Kari hisses in explanation. “I wrote a bunch of songs when I was in a really, really kinda good place,” Kari drawls, pulled into a momentary reverie. “There’s a lot on the CD about how the world sucks, but…the melodies are kind of happy,” she mulls. “And then I’ve got some songs just simply about feeling really really good,” explains Kari. “It’s really not me anymore,” she decides without any apparent sadness.

Delaying the CD’s release are licensing issues brought by Kari’s soon-to-be-ex husband, who wrote a few of the album’s tracks. However, the actress thinks positively: “I’ve learned more about love and friendship in the five months that I’ve been away from [marriage] than in the entire eight years I was with this person.” Indeed: during our interview she is frequently interrupted by friends, (“Can I hang out with you guys tonight?” She asks, only to be resoundingly reassured), phone calls, and a stray cat which she immediately falls in love with and later gives away (after putting the potential owners through a rigorous barrage of questions).

It’s no wonder Wuhrer, 25, feels at home at the Chateau. When she was 18, she lived here for the bargain price of $3,000 per month. Riding the wave of her MTV fame and playing in a goth-metal band, Wuhrer soaked up the splendor of the Chateau Marniont for the first time.

Buffy and Jody from Family Affair inspired Wuhrer to get into acting, commuting from her native Brookfield, Connecticut to New York City for auditions as she grew up. She booked her first job, a role in the feature Fire With Fire, on her last day of high school. Her first big break came when she was cast as the hostess for MTV’s Remote Control game show. Wuhrer later did a short-lived VJ stint on MTV, then enrolled at New York University to study acting.

There, she met music producer Rick Rubin, who ran Def Jam Records out of his dorm room while Wuhrer cultivated her own music outside of the classroom. The two left school and moved to L.A. where Rubin planned to make Wuhrer a pop sensation.

Two years passed and Wuhrer split with Rubin, landing TV work in Swamp Thing, Class of ’96 and Beverly Hills, 90210. Movie Roles in The Adventures of Ford Fairlane, Beastmaster 2: Through the Portal of Time, Sensation, Boulevard and Terminal Justice eventually led to a part in Sean Penn’s 1995 film The Crossing Guard with Jack Nicholson.

Wuhrer became a regular on Sliders in 1997. For an actress who’d often been typed as too sexy or pretty for hard-boiled roles, Wuhrer was surprised to find herself cast as a military captain fighter pilot, and even more perplexed when she walked straight into what she calls a threatening situation with Sabrina Lloyd (now on Sports Night) who played Wade Kathleen Welles on the series from 1995-97.

“It would have been hard for me, too, if some other woman who was given so much storyline came onto the show,” Wuhrer concedes. Now that Lloyd is off the show, Wuhrer reports that female jealousy “doesn’t exist in my life at all.” Wuhrer digs Sliders and all, but would like to take Maggie in a more Japanese animated punk direction.” I tried that last season, but everybody just told me it was a bad haircut,” she remarks ruefully.

Maggie’s look isn’t the only concept Kari has a heel with: “What we’ve been missing is more romance. Jerry O’Connell and I were supposed to have the chemistry going on and it just never seemed to really work out,” she says gloomily, poking at her berries with a fork.

Perking up, Wuhrer says she’ll get to direct for the first time later this season. Her episode will take place in a world where history has been erased by the advent of personal time machines. It will be up to the sliders to find the inventor of the personal time machine and take him back in time to uninvent the machine. Wuhrer has hopes to direct another episode which she envisions as West Slide Story in which our heroes slide into a world of song and dance. For now, it’ll have to wait.

Wuhrer attributes the performance on Sliders to an active imagination. No argument there. During a weekend barbecue, Kari and her friends discovered a large green pod on her back porch. Naturally, Kari concluded that the unidentified object was straight out of Invasion of the Body Snatchers, and hoped against hope that “the young, awesome Donald Sutherland would hatch out of it.” Wouldn’t you know, “it turned out it was just a stupid old seed for a palm tree.”

When she’s not fighting the Kromaggs, Wuhrer keeps a hand in movie work, spending her hiatus from Sliders filming an indie film called Kate’s Addiction. I play a lesbian psycho killer,” Wuhrer blurts out happily.

She will star in the forthcoming Sand, with Emilio Estevez and Denis Leary, about a woman’s return to her hometown community of Malibu. Wuhrer also has a recurring role on the new CBS series To Have and To Hold, starring fellow NYU chum Moira Kelley.

Thirteen years after Wuhrer’s first leap into Los Angeles, she is still standing — and laughing. “Its the nineties and I’m still 25…its amazing how that happens,” Wuhrer cackles. The price of staying at the Chateau has gone up considerably, but Wuhrer is once again pursuing music. Wuhrer may love the collaborative process of TV and film, but wants to spend more time making music in a creative state she calls “The Vapor,” where one has “transcended your own body and your own self and actually become the creation.” For Wuhrer, “…to lock into that vapor even for five minutes is more pleasurable and more rewarding than earning a million dollars,” she vows, gasping for breath.

Wuhrer has finished her drink and now prepares to impart a profound piece of advice. But a problem arises. She’s laughing way too hard to speak. After a solid three or four minutes of spasmodic laughter, she issues the nugget (stolen from High School High, I find out later) in broken pieces: “When you sneeze, never shake a person’s hand. [long pause, more laughter] And never shake their hand if they have a stump.” Wuhrer has spit small spray of french fries onto my shoulder from across the table. “I live by that in Hollywood.”

Note: Kari Wuhrer’s planned Season 5 episode never came to pass due to budget reallocation. Also, at the time of this interview, Wuhrer was 31-years-old.