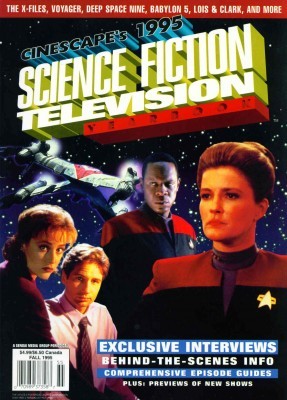 “The one duty we owe to history,” said Oscar Wilde, “is to rewrite it.” Last year, producer Tracy Tormé enthusiastically embraced that credo, following up a project on the American Revolutionary War with the creation of alternate timelines for what became Fox Broadcasting’s dimension-hopping Sliders.

“I was reading about George Washington for this project,” explains Tormé. “There was a moment when Washington was out in front of the Army in the days when the Rebels were losing, and eight British sharpshooters took aim on him as he sat up on his horse. All of Washington’s aides saw this at the last moment and covered their eyes because they knew he was going to be killed. All the guns fired, and somehow, these eight guys missed him. Well, the only thing holding the Rebel army together at that time was Washington. So, if any of those eight guys had been a decent shot, Washington’s killed, the Revolution is over. There is no United States.”

Such a notion intrigued Tormé, just as other historical “what ifs” have fascinated writes for years. After pitching the idea of a reality-shifting series to Fox, Tormé and producer Robert Weiss began looking closely at great moments in history, realizing that just the slightest change, or “quirk” as Tormé says, often would have changed everything.

“Tracy and I were fans of alternate realities and have always been interested in speculative fiction,” says Weiss. “We were looking for a way to explore these other places, these ‘what if’ scenarios. We were looking for a way to do that in a series and, sort of simultaneously, Tracy and I had come up with the idea — what if it was always 1995 or the present day, but circumstances were different?”

Sliders, whose own future is in limbo at the moment, revolves around whiz-kid Quinn Mallory (Jerry O’Connell), a physics grad student who accidentally creates a gateway to parallel universe and is sucked into them with a computer geed named Wade Wells (Sabrina Lloyd), physics professor Maximillian Arturo (John Rhys-Davies) and former R&B singer Rembrandt “Crying Man” Brown (Cleavant Derricks).

Unlike Quantum Leap, where Sam Beckett (Scott Bakula) is attempting to correct wrongs of the past, the “dimension sliders” don’t necessarily plan on intervening in the alternate realities they encounter.

“Part of the fun is having them decide whether to intervene or not,” says Weiss. “It’s great that these people are not friends that have been together for 20 years. They are uneasy company. And they feel differently about the situations they encounter and whether they should intervene in those situations. Jerry’s character wants to take the plunge and the drop of a hat to try to help out or change things, but others are more reticent. We’re finding a lot of fun in that.”

Among the alternate realities visited by Sliders in its first, abbreviated season include: a United States ruled by the Soviet Union; a world where antibiotics haven’t been developed; a San Francisco where the 1967 “Summer of Love” never ended and a society where intellectuals are as famous as athletes.

“I think part of the fun of the series is transplanting cultural icons from our world and putting some spin on them and seeing them in these others worlds in a different context,” says Weiss. “We’ve even talked about situations where we might return to The People’s Court and this time Rusty the bailiff is the judge and Judge Wapner is the interviewer outside and Doug Llewellyn is the bailiff. That’s the kind of fun we can have. And we are looking for recognizable folks to be in these different worlds.”

Enthuses Tormé, “We can do alternate history stories and we can do personal stories where the worlds are similar but our characters have gone down different paths. And I think that the universal theme of the show is that in everybody’s life, we all have these crossroads that we come to continually. And it asks: if you had gone to the left instead of the right, how would you life have changed?”

Though it formally canceled the fledgling series last May, Fox Broadcasting now plans to bring back Sliders as a midseason replacement.