Sliders plunges into alien territory in bid for renewal 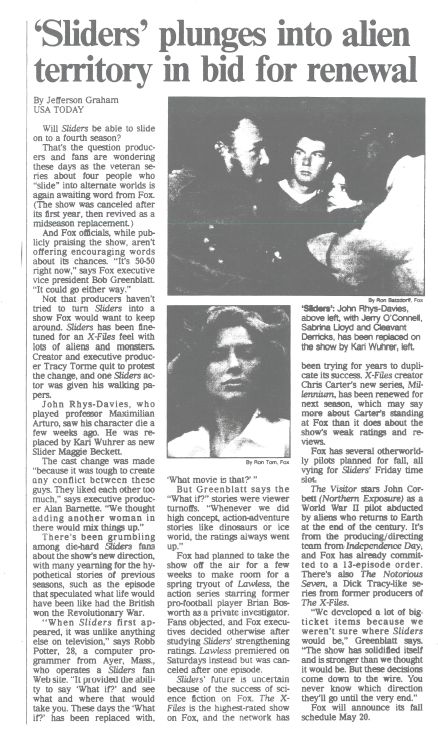 USA Today, Jefferson Graham, April 17, 1997 — Will Sliders be able to slide on to a fourth season? That’s the question producers and fans are wondering these days as the veteran series about four people who “slide” into alternate worlds is again awaiting word from FOX. (The show was canceled after its first year, then revived as a midseason replacement)

Not that producers haven’t tried to turn Sliders into a show FOX would want to keep around. Sliders has been fine-tuned for an X-Files feel with lots of aliens and monsters. Creator and executive producer Tracy Torme quit to protest the change, and one Sliders actor was given his walking papers.

John Rhys-Davies, who played professor Maximilian Arturo, saw his character die a few weeks ago. He was replaced by Kari Wuhrer as new Slider Maggie Beckett.

The cast change was made “because it was tough to create any conflict between these guys. They liked each other too much,” says executive producer Alan Barnette. “We thought adding another woman in there would mix things up.”

There s been grumbling among die-hard Sliders fans about the show’s new direction, with many yearning for the hypothetical stories of previous seasons, such as the episode that speculated what life would have been like had the British won the Revolutionary War.

“When Sliders first appeared, it was unlike anything else on television,” says Robb Potter, 28, a computer programmer from Ayer, Mass., who operates a Sliders fan Web site. “It provided the ability to say ‘What if?’ and see what and where that would take you. These days the ‘What if?’ has been replaced with, ‘What movie is that?’”

But Greenblatt says the “What if?” stories were viewer turnoffs. “Whenever we did high concept, action-adventure stories like dinosaurs or ice world, the ratings always went up.”

FOX had planned to take the show off the air for a few weeks to make room for a spring tryout of Lawless, the action series starring former pro-football player Brian Bos-worth as a private investigator. Fans objected, and FOX executives decided otherwise after studying Sliders’ strengthening ratings. Lawless premiered on Saturdays instead but was canceled after one episode.

The Visitor stars John Corbett (Northern Exposure) as a World War II pilot abducted by aliens who returns to Earth at the end of the century. It’s from the producing/directing team from Independence Day, and FOX has already committed to a 13-episode order. There’s also The Notorious Seven, a Dick Tracy-like series from former producers of The X-Files.

“We developed a lot of big-ticket items because we weren’t sure where Sliders would be,” Greenblatt says. “The show has solidified itself and is stronger than we thought it would be. But these decisions come down to the wire. You never know which direction they’ll go until the very end.”