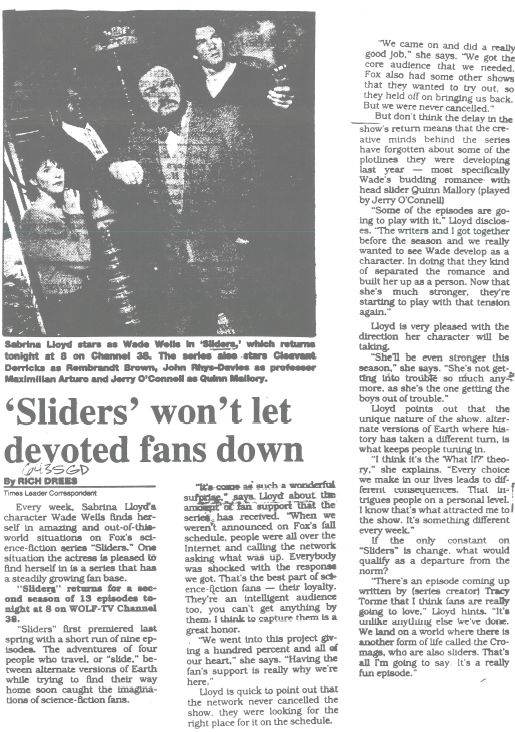 The Times Leader, Rich Drees, March 1, 1996 — Every week, Sabrina Lloyd’s character Wade Wells finds herself in amazing and out-of-this-world situations on Fox’s science-fiction series Sliders. One situation the actress is pleased to find herself in is a series that has a steadily growing fan base. Sliders returns for a second season of 13 episodes tonight at 8 on WOLF-TV Channel 38.

Sliders first premiered last spring with a short run of nine episodes. The adventures of four people who travel, or “slide,” between alternate versions of Earth while trying to find their way home soon caught the imaginations of science-fiction fans.

“It’s come as such a wonderful surprise,” says Lloyd about the amount of fan support that the series has received. “When we weren’t announced on FOX’s fall schedule, people were all over the Internet and calling the network asking what was up. Everybody was shocked with the response we got. That’s the best part of science-fiction fans — their loyalty. They’re an intelligent audience too, you can’t get anything by them. I think to capture them is a great honor.

“We went into this project giving a hundred percent and all of our heart,” she says. “Having the fan’s support is really why we’re here.”

Lloyd is quick to point out that the network never cancelled the show, they were looking for the right place for it on the schedule.

“We came on and did a really good job, ” she says. “We got the core audience that we needed. Fox also had some other shows that they wanted to try out, so they held off on bringing us back. But we were never cancelled.”

“Some of the episodes are going to play with it,” Lloyd discloses. “The writers and I got together before the season and we really wanted to see Wade develop as a character. In doing that they kind of separated the romance and built her up as a person. Now that she’s much stronger, they’re starting to play with that tension again.”

Lloyd is very pleased with the direction her character will be taking.

“She’ll be even stronger this season,” she says. “She’s not getting into trouble so much anymore, as she’s the one getting the boys out of trouble.”

Lloyd points out that the unique nature of the show, alternate versions of Earth where history has taken a different turn, is what keeps people tuning in.

“I think it’s the ‘What If?’ theory,” she explains. “Every choice we make in our lives leads to different consequences. That intrigues people on a personal level. I know that’s what attracted me to the show. It’s something different every week.”

If the only constant on Sliders is change, what would qualify as a departure from the norm?

“There’s an episode coming up written by (series creator) Tracy Tormé that I think fans are really going to love,” Lloyd hints. “It’s unlike anything else we’ve done. We land on a world where there is another form of life called the Kromaggs, who are also sliders. That’s all I’m going to say. It’s a really fun episode.”