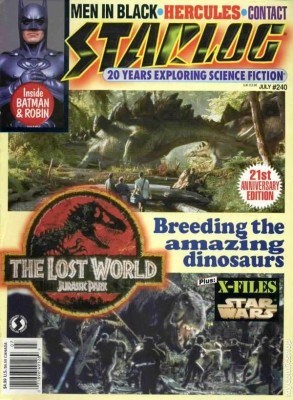 As unexpected occurrences go, John Rhys-Davies’ departure from Sliders during the long-struggling series’ third season ranks right up there with the Sun’s rising every day. Rhys-Davies had frequently and very publicly expressed his disdain for the show’s scripts and the way in which series creator/writer Tracy Tormé utilized Rhys-Davies’ popular character, the prickly Professor Maximilian Arturo. However, the actor turning up as Leonardo da Vinci in the “Scorpion, Part I” episode of Star Trek: Voyager just a few months after his final slide-now, that was a surprise.

“I like SF. I love intelligent SF,” Rhys-Davies says in his deep basso voice. “When you come across good writing, and I think ‘Scorpion’ was finely written, it’s a wonderful thing. I had just come through a period where the contractual nature of my job obliged me to take scripts that frankly wouldn’t get past Writing 101. We had the most wonderful series concept with Sliders, but we did everything that had been done before and we did it every damned episode. We did Species. We did Tremors. We did Twister. We did War of the Worlds. We did The Island of Dr. Moreau. It was out of control, just out of control.

“I think Tracy did a nice job early on. We had our differences and we fought occasionally. In the end, Sliders wasn’t the worst experience I ever had. I was just disappointed. Again, I love SF. I’m a passionate believer in Sliders. The series could have been great. The public always understood the idea of Sliders. The public understood that you could go anywhere in the galaxy. The writers, though, would try to graft a Law and Order story, or something they had done or seen before, onto Sliders and just make the characters work around it.”

Rhys-Davies has never been shy about expressing his opinion of the series or the direction in which it headed. And his character? In Starlog #225, he likened Arturo’s role in one story to “walking furniture.” His candor continues. “If you look at the episodes,” he explains, “the guest characters on the show were far more interesting and far better written than the regulars, because the writers really did not understand or have an investment in the regular characters. When, by episode eight, your head writer turns to you and says, ‘John, it’s all right for you to be critical, but it’s very hard to come up with ideas for a show like this, and I think we ought to start revisiting some of the worlds we’ve already been to,’ you just know you’ve hit a level of creative impoverishment that you’re stuck with for the rest of the time.”

Rhys-Davies’ disenchantment with Sliders obviously runs quite deep. The actor even dismisses the “Exodus” two-parter, his third season swan song as Professor Arturo, which involved the Sliders trying to find a new home for the inhabitants of an Earth being poisoned by radiation. Rhys-Davies claims that the Sliders producers purchased his story idea and then bastardized it, in part, by getting their scientific facts wrong. “It ended up having a quasar coming into the solar system,” he complains. “I said, ‘Do you know what a quasar is?’ They said, ‘Yeah, it’s something small and it rotates fast.’ I said, ‘Yes, but it’s actually a neutron star. It’s a collapsed star that has a mass of about 1.4 to four times the mass of the Sun. It’s not big enough to create a black hole. It is immensely dense and, of course, will consequently have an immense force of gravity. You cannot bring a star into the solar system without throwing everything off. And at the end, you’ve got a cluster of neutron stars coming through.’ I also said, ‘This thing about radiation is nonsense.’ They said, ‘But it spins fast!’ I said, ‘Yes, but you have it spinning once every 24 hours.’ Some of them spin 32 times a second. With the kind of radiation that would generate, you can’t hide underground. The radiation would go through the Earth, for God’s sake.’ I just wasn’t very happy with the show.”

That said, however, Rhys-Davies is quick to add that he misses the series and, more to the point, his co-stars, Jerry O’Connell, Sabrina Lloyd and Cleavant Derricks, who portrayed Arturo’s fellow Sliders, Quinn Mallory, Wade Welles and Rembrandt Brown, respectively. Rhys-Davies describes O’Connell as being like a son to him, and praises both Lloyd and Derricks as solid actors whose company he enjoyed. It was, in fact, the cast’s camaraderie that enabled the frustrated Rhys-Davies to stick with Sliders as long as he did. “You could’ve asked any of the four of us and we would all say, ‘I like going to work no matter what the work is, because I get to meet the other guys each day,”‘ he says. “We were very close and we had a perfect working relationship, really. We were tolerant of each other. We were supportive. We were helpful. If someone looked stuck or turned around and said, ‘I don’t know what to do with this,’ or ‘Somebody take this damn line,’ we would help each other. If someone said, ‘I have nothing to do in this damn scene,’ someone would say, ‘Why don’t you take my line?’ Of course, the stuff being so badly written…” Rhys-Davies, clearly attempting to restrain and censor himself, pauses for a moment, then continues. “I’m heartbroken for the series. The last lot of numbers it got were the lowest [ratings] we ever had.”

After slipping away from Sliders in a relatively quiet fashion, Rhys-Davies elected to take some time off. He pursued earning a pilot’s license so that he could indulge in his passion for flying airplanes. He filmed a small role for a TV pilot. And, of all things, he popped up on Voyager as a Holodeck Leonardo da Vinci in that Trek series’ third season cliffhanger finale. In “Scorpion, Part I,” Captain Janeway (Kate Mulgrew) found herself in real trouble as the ship, already traversing Borg-infested space, encountered an alien race even more powerful than Starfleet’s most dreaded foe. Realizing that she might actually have to form an alliance with the Borg in order to eke out even the slimmest chance of survival, a too-tense-to-sleep Janeway entered the Holodeck and sought out the advice of the enigmatic da Vinci in his 15th-century workshop.

“I’ve been a Trekkie, oh, for years. It’s very funny. I call my 29-year-old son, who is in England, almost every week. He said, ‘What are you doing?’ and I told him I was going to do a Voyager episode. He said, ‘Oh, Dad, at last you’ve got a real ‘job! I’ve been a Trekkie all my life. You’ve done some great things, I suppose, but this really impresses me,'” Rhys-Davies recalls with a hearty laugh. “I said, ‘Son, it’s only a couple of little scenes. It’s a cameo, a bit of fun.’ He said, ‘Yeah, but it’s Star Trek. Come on!’ I loved doing the show, loved Kate.

“It was about her trying to figure out how to solve this huge, intractable problem she has. Since she is a fan of da Vinci, and he’s accessible on the Holodeck, she talks to him about creativity and the imagination. It was very touching, because it was about the magic of creativity and imagination and how we can get ourselves in the right frame of mind to let the subconscious create for ourselves. I think the idea to introduce Leonardo to Star Trek was Kate’s. I loved working with her. She’s a very good actress who, once she trusts the actor with whom she’s working, can put her soul into what she’s doing. It was a pleasure to work with her. I certainly think Leonardo will be back. It would be a surprise to me if Kate didn’t want to repeat our experience. We had some wonderful moments together. If the script was as good as the one for ‘Scorpion’ and the timing worked out, I would, of course, love to come back onto the show.”

Another character Rhys-Davies might be reprising soon is that of Sallah, Indiana Jones’ (Harrison Ford) loyal pal in Raiders of the Lost Ark and Indiana Jones and the Last Crusade. Steven Spielberg wants to direct a fourth installment in the beloved adventure series, and Ford has agreed to star if a script can be written to his satisfaction. “The presence of Sallah and, therefore, of John Rhys-Davies is wholly dependent on the location of the film’s action,” the actor says. “If it goes back to India, for instance, they would have a hard time getting old Sallah over to India. I would give my eye teeth to work again with Steven and Harrison. I would love, love to do it. In the event that the geography prevents Sallah from playing a part in the story, though, I have nothing but affection for everyone involved and I would wish them nothing but the best on the film.”

John Rhys-Davies isn’t sure what the future will hold for him. It remains to be seen if the pilot he recently shot for Disney will be picked up as a series. There’s no next role on tap yet, and it sounds as if the actor actually likes it that way. “I’m just trying to get my batteries recharged for a while. I’m looking around and will only say yes to things that actually pique my interest as an actor, parts that are very well-written. I don’t care if it’s a big role or just a little cameo in a movie or on TV I just want to play something that’s well-written. Right now, that’s my priority.”