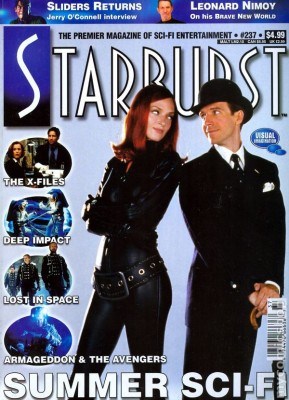 Thursday, March 12th, 1998 in Los Angeles, California, and something terrible has happened. After days of blistering heat, the climate has suddenly turned cold. Why do we care? Because this is the day the Starburst crew have joined the Sliders production team on the lot of Universal Studios, and no one is dressed for the weather…

The location is New York Street, an incredibly realistic series of façades that easily pass for the Big Apple. The four Sliders — Quinn, Maggie, Rembrandt and new recruit Colin (Charlie O’Connell) — have arrived in a world where clones are bred to provide spare parts for donor surgery. Shooting is taking place outside a hotel set, as a gaggle of (very cold) clones queue up to claim free medicine. In this episode, Jerry O’Connell plays three roles — Quinn, Quinn’s parallel self, and the parallel’s clone — and must change costume for each. Add those roles to his commitments as a producer on the series, a director and a story writer, and you can imagine how hard it is for the actor to find time to chat to the press. And yet he generously grabs every spare moment he can to talk. Even if it means replying to questions while he is running along filming his leap into the portal…

Sliders has had a peppered history; a show that survived against the odds, even through the times when the quality was less than inspiring. When the Fox Network cancelled the show last year, it seemed that its time was finally up — until the Sci-Fi Channel decided to fund a fourth series. On June 8th the new season makes its début, but this is not more of the same. Sliders has been picked up, shaken down and re-tooled. The stories are stronger, the writing wittier, and the theme slightly darker.

Earth Prime has been overrun by the sliding marauders, the Kromaggs, and Quinn discovers that home is not actually where he thought. His true parents left him with their alternatives in a parallel universe to save him from the Kromaggs; now Quinn must find his real Earth Prime — and along the way the brother he never knew he had, Colin.

“I hate to pooh-pooh the shows we’ve done before,” says O’Connell, “but hands down this is the best season that we’ve done. The writing, the characters, the direction that the show is in.”

Having viewed a preview tape of one episode, this writer won’t disagree. It seems that Sliders may now actually fulfill its potential; the show that can be absolutely anything.

“Last season, because we were on the Fox Network, we were in an eight o’clock time slot, and you really have to dumb the show down, ” O’Connell continues. “That timeslot really caters for the 6 to 12-year-olds, and to do a Science Fiction show that’s on at eight PM almost becomes cartoony. Now that we’re on the Sci-Fi Network we’re allowed to become much more cerebral, darker, edgier and it’s just a more intelligent show. It’s nice to be on a network that specializes in Sci-Fi because that’s why we’re all here.”

One very welcome addition to the mix is just the right amount of knowing humour. Like Buffy the Vampire Slayer, Sliders has learned to make audiences laugh while telling good stories. “You definitely have to touch on that,” believes O’Connell. “If you look at the other project I just did, Scream 2, it’s a very scary thriller, but it’s almost comedic at times. In this day and age the kids are savvy to the point where you almost have to make it campy.”

This is the first season of Sliders to feature O’Connell’s credit as a producer. What sort of input has he made into the show this year? “My title as producer pretty much entails making sure that my family is employed by USA Network Television!” he jokes wryly.

“Honestly, I’m a big Sci-Fi buff. When I went to film school I concentrated on writing, and I really concentrated on hour-long format television writing. I think the medium of hour-long format is the most fun to work in show business, it’s like rep theatre only we’ve got special effects. I was a huge Twilight Zone fan — that eerie quality that almost makes you feel uncomfortable while you’re watching it. But you find yourself there.

“I think I pretty much bring, without any disrespect to the producers, a younger perspective to the show. We have a terrific writing staff — Bill Dial, David Peckinpah and Chris Black — they’re really good, intelligent Sci-Fi writers and what I bring is sort of the youthful voice to the script.”

O’Connell has brought more than his youthful voice to the episode Way Out West. He wrote the story, which was then turned into a teleplay by Chris Black.

“It’s a western slide!” O’Connell jokes. “I always thought of this show as a Western, but I went to NYU film so I pretty much over-analyze everything! Like I see Star Trek as a Western — Space, the final frontier… parallel dimensions, the final frontier! We actually brought back a bad guy who’s a Kromagg — played by Reiner Schone, who’s a fabulous actor. He’s six foot eight, so he’s really imposing. I’ve never worked
with alien make-up, I’ve never had to play and alien, but this is a guy who is such fun on and off the set, and he puts on this make-up and he just becomes this [villain].”

The sixth episode of the season, Oh Brother Where Art Thou?, finds Charlie O’Connell joining the regular cast. The cynical might accuse Jerry O’Connell of nepotism, but there’s certainly no denying that Charlie’s performance as the innocent Colin gives the show another boos.

“The major theme of this season is that we’re trying to find our home Earth,” reveals O’Connell. “When I heard that, and I knew that my brother was a college graduate without a job, I thought, ‘Why doesn’t my character Quinn meet his long-lost brother, and together the two characters’ desire to go home will be the driving force of the season?’ I think it’s really worked out.”

Since the departure of Professor Maximillian Arturo (John Rhy-Davies) and Wade Welles (Sabrina Lloyd) during the third season, Quinn’s role has matured a great deal. “When we had John Rhys-Davies on the show, he was the voice of science, because he just has that voice. He says anything and everyone listens. Now that we’re in the fourth season and we’re no longer joined by Rhys-Davies, I’ve really sort of become the scientific voice of Sliders, so it’s really become a maturing experience for me because science and mathematics were never my strong points. It’s a nice education for me as well.”

Are there any plans to bring either of the former regulars back in guest spots, possibly playing their parallel universe counterparts? “There has been talk,” he offers. “Rhys-Davies is so great, and I know he’d
jump at the chance. Sabrina I really don’t know. It’s not really my call — I’m just a producer, not an executive producer!”