Sliding In and Out 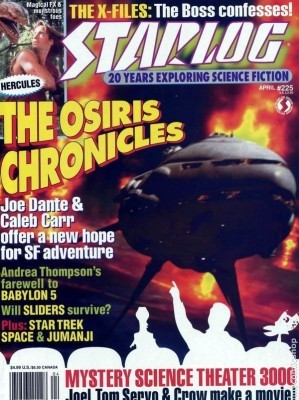 In assessing the strengths and weaknesses of Sliders‘ debut season, co-creator Tracy Tormé is of the mind that his writers just “scratched the surface” of the series’ potential. But he doesn’t feel that the show’s first year was aimed at a younger demographic. “The show works on two levels, sort of like The Simpsons. Kids watch it in a wide-eyed way, and a lot of our dark humor and satire goes over their heads, but they don’t really realize that they’re missing anything. Adults that like it realize that we do a lot of allegory and satire. We’re aiming to please both audiences this year. Sliders works best when it works on those dual levels.

“When Robert [Weiss] and I created the show, we were equally tempted to do a straight science fiction/action-adventure show and a comedy. We realized that the potential for either was great. Ultimately, we decided to do both. We knew that was unconventional, but I think that’s what makes the show unique. It’s an SF/action-adventure on one hand, and it’s a black comedy on the other. But by setting the shows on other Earths, we’re allowed to say things about our Earth that you really can’t say in today’s cautious, politically-correct world of television. That certainly appeals to me as a writer.”

Don’t expect Sliders to go in a vastly different direction this season, Tormé cautions, since it is still, to use a show-business expression, finding its legs. “There will be some subtle changes, such as a bit more conflict among the characters,” he says. “And eventually I would like to try and do more science-fictiony shows. We didn’t do many out-and-out, hardcore SF concepts the first year. And we’re not doing them the early part of the second. Some of that had to do with budget, but most of it had to do with the direction the network wanted to go: in more of a whimsical direction, with smaller, more personal stories.”

Tormé agrees that Sliders‘ parallel worlds concept makes it a tough sell to audiences used to single-setting theme shows. “Sliders is a double-edged sword. Its strengths are also what makes it more difficult to push ahead commercially. The show is very difficult to put in a box. It’s not like each week we return to the same hospital or the same police station. Or in a science-fiction sense, it’s not like we’re stuck on a space station somewhere, and each week new aliens visit us. It’s a show where we go to one, two or three different worlds in every episode.

Despite such concerns, Tormé reports that in its first year, Sliders did well in the ratings, earned good reviews and “developed a fiercely loyal audience. When the show was put into hiatus, the network was literally flooded with letters and e-mail — the Internet stuff was really huge. I think that had a hand in bringing us back. Fox didn’t know what to do with us. They took some time to think it through before they renewed us.”

Tormé says the network had ideas for the second season, but insists they were all of a “general” nature. “We discussed bringing Quinn more to the forefront. We discussed some of the production difficulties we had in Canada, and some of the FX directions we would like to go in. We told Fox there were some things we wanted to bring out more in the second season. It was not like we said, ‘if you bring us back, we will change this entirely. ‘It was a lot of little things.”