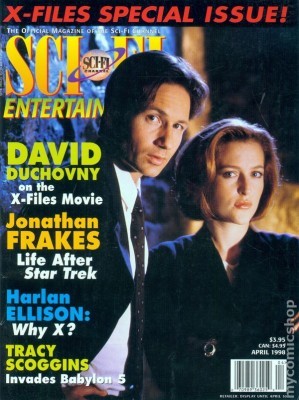 When new episodes of Sliders begin airing on the Sci-Fi Channel later this year, the former Fox network series will enter a very select company. With the start of its fourth season, Sliders will become one of the longest-lived, first-run science fiction shows in American television history — and one of the very few show that didn’t start out in syndication.

That’s a respectable accomplishment in an industry where most recent sci-fi series have been lucky to last a dozen episodes, let alone several years. Sliders‘ longevity hasn’t been without its struggles, though; like most TV sci-fi, the show has battled marginal ratings and confused network executives.

How has Sliders survived? One answer is the series’ wide-open premise: as young inventor Quinn Mallory (played by Jerry O’Connell) explains in the original opening narration, “same Earth: different dimensions.” Quinn’s ingenious breakthrough is the discovery of “sliding,” a method for traveling sideways from one Earth to another — but when an accident damages his control mechanism, he and his companion find themselves forced to slide at random through an infinite number of alternate realities trying to find the one they left.

Some of the worlds they find are standard sci-fi settings: an Earth ruled by women, at least one where dinosaurs are still alive and chewing scenery, and one where the British are still running America. Others, though, have been more unusual: a world where fire is both alive and sentient and an Earth where the ancient Egyptian civilization never fell are some of the more novel landscapes we’ve seen.

Other stories have focused on Quinn himself and his companions in sliding. Quinn’s mentor, Professor Maximillian Arturo (John Rhys-Davies), is a scholar and a scientist, but alternate Arturos have included the Sheriff of San Francisco (to Quinn’s “Robin Hood”). Mild-mannered Wade Welles (Sabrina Lloyd), not quite Quinn’s girlfriend on their home Earth, has been a murderess on one alternate Earth and a hardened resistance fighter on another; on some worlds she married Quinn while on other Earths they’ve never met. And “Crying Man” Rembrandt Brown (Cleavant Derricks), a professional singer who had the bad luck to drive through one of Quinn’s first slide-gates, has turned up as an Elvis-grade superstar on one Earth and hone through pregnancy on another.

Another factor in Sliders‘ success may be that it’s delivered a higher percentage of straight-ahead adventure than most of its recent cousins in televised sci-fi. One of the show’s most popular (and most action-filled) episodes introduced a race of alien conquerors called the Kromagg, who have discovered sliding technology and are out to conquer all the worlds they can find. And the third season introduced a recurring adversary, the ambitious Colonel Rickman (played first by Roger Daltrey, then by Neil Dickson), with a sliding timer and a grudge against Quinn and his friends. The third season also saw other changes in the show. Series creator Tracy Tormé moved on to other projects, and creative differences with the new producers prompted John Rhys-Davies to propose a story featuring the death of Professor Arturo. As Rhys-Davies departed, Kari Wuhrer joined the Sliders as Maggie, a military officer fleeing disaster on her own world. There were also some very strange adventures, including an eerie and peculiar “Wizard of Oz” homage.

Sliders was a mid-season replacement in both its first and second years on the Fox network; as a result, its three seasons comprised just 48 episodes when Fox finally cancelled the show in mid-1997. Nonetheless, it had developed a devoted fan following, and after a relatively quick round of negotiations, the Sci-Fi Channel bought not only the rights to the existing episodes, but commissioned a fourth season as well.

With that deal came more changes. David Peckinpah, who had previously written for the show, was brought in as its new executive producer; among his staff are producer Bill Dial and writer-producer Marc Scott Zicree. Star Jerry O’Connell, who had previously directed several episodes, also acquired producer status and is expected to write a fourth season episode as well. On the other side of the screen, Sabrina Lloyd elected not to return as Wade Welles, and fan gossip speculated that friction between Lloyd and Kari Wuhrer prompted the exit. As with most so-called soundstage “feuds,” however, no real documentation has emerged to support the rumors. Meanwhile, producers signed Charlie O’Connell — Jerry’s younger brother — to play new regular Colin Mallory, Quinn’s alternate younger brother, and filming of the new episodes began on Universal Studios’ Los Angeles backlot in September last year.

Like Babylon 5‘s J. Michel Straczynski, Sliders producers have given considerable credit to fans, especially online fans, for their ongoing support of the program. In particular, Marc Scott Zicree has become almost as visible in cyberspace as Straczynski himself, promoting the new episodes and responding to viewer’s questions. According to Zicree, the Sci-Fi Channel incarnation of the series will become purer science fiction, steering clear of magic and other fantasy trappings. Star Trek veteran David Gerrold has written a fourth-season script, and Zicree has also expressed hopes for a script from well-known SF writer D.C. Fontana. If the show goes to a fifth season, best-selling novelists Joe Halderman and Harry Turtledove, the latter known as one of SF’s premier alternate-history mavens, are said to be on Zicree’s list of potential scripters.

Zicree has also promised Internet fandom more of the deadly Kromaggs, who will figure in five or six of the 22 fourth-season episodes, and a careful retooling of Maggie that will add a compassionate dimension to her character and smooth her abrasive qualities without sacrificing her aggressiveness. More character development is also planned for Rembrandt Brown, whose role as the oldest of the Sliders may turn him into more of a mentor and father figure than he’s been in the past.

Some fans have expressed concern over reported cost-cutting measures that have shrunk the Sliders budget, but Zicree’s online reports suggest that the worries are unfounded. For one upcoming episode, he reports, the show was able to appropriate $500,000 worth of sets from the quickly cancelled ABC series Timecop and to borrow the keys to Waterworld‘s costume closet. The result should be an episode with feature-film looks, he says, so that fans need fear no loss in production values.

Current plans call for the Sci-Fi Channel to air thirteen of Sliders‘ best episodes on a weekly basis beginning in March, followed by the fourth-season debut in June. According to Zicree, the one dictate Sliders producers received from their new bosses at the Sci-Fi Channel was “Make it smart.” If they succeed at that task — and appearances suggest that the odds are in their favor — the show’s fortunes have nowhere to go but up, and Sliders could very well become an even bigger success than it’s already proven to be.