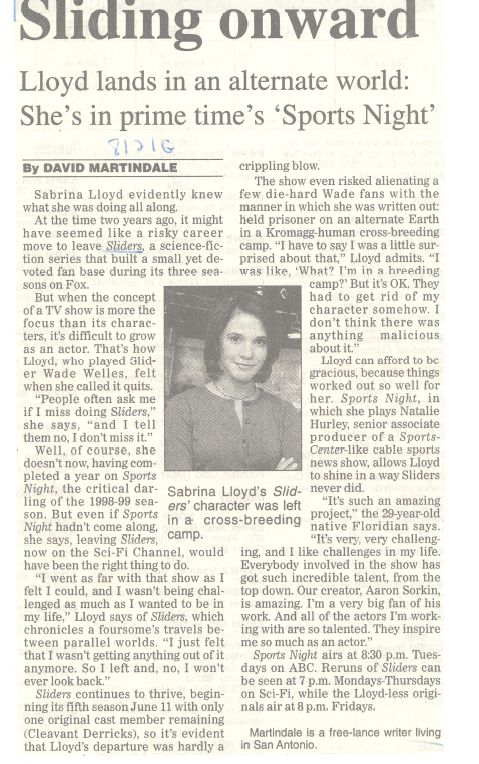 The Houston Chronicle, David Martindale, May 16, 1999 — Sabrina Lloyd evidently knew what she was doing all along.

At the time two years ago, it might have seemed like a risky career move to leave Sliders, a science-fiction series that built a small yet devoted fan base during its three seasons on FOX.

But when the concept of a TV show is more the focus than its characters, it’s difficult to grow as an actor. That’s how Lloyd, who played Slider Wade Welles, felt when she called it quits.

“People often ask me if I miss doing Sliders,” she says, “and I tell them no, I don’t miss it.”

Well, of course, she doesn’t now, having completed a year on Sports Night, the critical darling of the 1998-99 season. But even if Sports Night hadn’t come along, she says, leaving Sliders, now on the Sci-Fi Channel, would have been the right thing to do.

“I went as far with that show as I felt I could, and I wasn’t being challenged as much as I wanted to be in my life,” Lloyd says of Sliders, which chronicles a foursome’s travels between parallel worlds. “I just felt that I wasn’t getting anything out of it anymore. So I left and, no, I won’t ever look back.”

Sliders continues to thrive, beginning its fifth season June 11 with only one original cast member remaining (Cleavant Derricks), so it’s evident that Lloyd’s departure was hardly a crippling blow.

The show even risked alienating a few die-hard Wade fans with the manner in which she was written out: held prisoner on an alternate Earth in a Kromagg-human cross-breeding camp. “I have to say I was a little surprised about that,” Lloyd admits. “I was like, ‘What? I’m in a breeding camp?’ But it’s OK. They had to get rid of my character somehow. I don’t think there was anything malicious about it.”

Lloyd can afford to be gracious, because things worked out so well for her. Sports Night, in which she plays Natalie Hurley, senior associate producer of a SportsCenter-like cable sports news show, allows Lloyd to shine in a way Sliders never did.

“It’s such an amazing project,” the 29-year-old native Floridian says. “It’s very, very challenging, and I like challenges in my life. Everybody involved in the show has got such incredible talent, from the top down. Our creator, Aaron Sorkin, is amazing. I’m a very big fan of his work. And all of the actors I’m working with are so talented. They inspire me so much as an actor.”

Sports Night airs at 8:30 p.m. Tuesdays on ABC. Reruns of Sliders can be seen at 7 p.m. Mondays-Thursdays on Sci-Fi, while the Lloyd-less originals air at 8 p.m. Fridays.