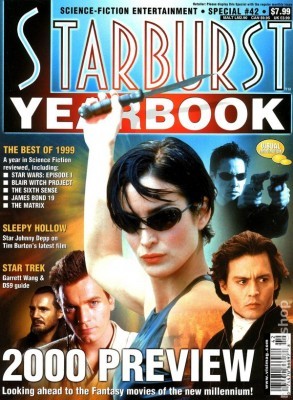 Jerry O’Connell admits to being a big Science Fiction fan. “I love it. I wanted to get into Sci-Fi, especially TV Sci-Fi. When I graduated from college. I wanted to get a TV show. I wanted to act and I wanted to prove to my parents that I could make a living doing it. So, I went straight to TV. When pilot season comes around, you get about 100 scripts and one is dumber than the next. You try to pick a good one, do it, then hope that it gets picked up and runs five years because that’s where the big change comes in.

“I read two scripts [in 1994] that I really liked. One was Sliders and the other was some show called Party of Five. I went to Fox and read for Party of Five. They seemed very interested in me and I figured, ‘I’m going to get this show. It’s going to be great.’ I come back to New York and right after I’m back, the phone rings. They said I’ve got to be back in Los Angeles right away. I said, ‘Is this for Party of Five?’ They said, ‘No, it’s for Sliders, and it starts shooting tomorrow. They just fired their lead.’ Ten hours later I was in Vancouver doing the first scene of Sliders. A lot of my friends went to grad school, and I really consider Sliders getting my Masters.”

O’Connell, of course, starred on Sliders as Quinn Mallory, the intrepid, dimension-tripping inventor. The show — which also starred, at the beginning, John Rhys-Davies, Sabrina Lloyd and Cleavant Derricks — never quite broke out, performing modestly first on Fox and then on The Sci-Fi Channel.

Still, it attracted a core of die-hard aficionados who supported the show by faithfully tuning in, emailing and writing Fox and Sci-Fi Channel to ensure its annual renewal, and by turning up in droves at conventions attended up Sliders’ stars. Cast members came and went, but for four years O’Connell remained both loyal and front and centre. For a time, O’Connell’s brother Charlie even joined the fun, playing Quinn’s sibling, Colin. When the fifth season kicked off, however, the O’Connell brothers were gone and the show played out the last of its string.

“It’s done,” explains the affable O’Connell, who notes that he didn’t watch any Sliders episodes after his departure, even though the new writers created a Quinn/Colin hybrid character called Mallory. “I did four years. It was a fun show. When it went to cable, they let me produce it, which was a lot of fun. I also got my brother his job on it, which was great. We got to work together and have a good time. Come fifth season, TV shows tend to know they’re going into syndication. They’ve already got the money. So , they’re really just doing the fifth year to get a little more programming. They got very, very cheap and I did not want to be on a cheap sci-fi show. Dry ice and stuff; I wasn’t going to do that. So I graciously bowed out.”

“The [first four years] were the best, the best. Anyone who wants to be a film actor should do hour-long television. It is a boot camp. It is repertory theatre. You are basically given a new play every week and you’ve got to put it on. And you’ve got to finish it by Friday, because it has to be edited by Wednesday, because it’s going to be on TV the following Friday. It was a fabulous experience. It’s made me very uninhibited as an actor. I’m really not afraid to do anything.”

O’Connell’s fans, and he’s got plenty of them, know that he’s no stranger to genre work. Though his credits include Rob Reiner’s classic Stand By Me, the blockbuster Jerry Maguire and the recent drama Body Shots, which cast him as a real jerk, O’Connell is better know for Sliders, Scream 2, My Secret Identity and Joe’s Apartment. Right now, he’s busy on his biggest genre project yet, the Brian De Palma-directed Sci-Fi epic, Mission to Mars. “It’s a Disney movie with a $700 million budget,” jokes the actor. “That’s an exaggeration. Don Cheadle goes to Mars and he experiences some extraterrestrial wackiness. Gary Sinise, Tim Robbins and I are the rescue crew that goes out to save Don. The first half of the movie is us going out there on a six-month journey, and the wackiness that ensues in Space. Then we get to Mars. It’s a really cool movie. I get to put on an astronaut outfit every day. I’m very excited about that. It’s like every little boy’s dream come true.”

De Palma, of course, remains one of Hollywood’s most intriguing and frustrating directors. While even his worst outings boast amazing imagery, there have been far more films of late along the lines of Snake Eyes, Mission: Impossible and Raising Cain than of Dressed to Kill, Scarface or The Untouchables. O’Connell quickly comes to the defense of his director. “He’s terrific. I love De Palma,” he argues. “Being a New York University film graduate, I’ve written papers on the guy. I’ve got a paper that compares the new Scarface to the old Scarface. I’ve got to print that out and give it to him. So, getting the chance to work with De Palma, you don’t hesitate. You just jump right in there. He’s fabulous. He’s a master. He’s a director of old. He’s the last of an awesome breed.”

O’Connell is working hard on Mission to Mars. Actually, he’s working out hard for Mission to Mars. He’s buff as hell and that’s a direct — and as O’Connell tells it, amusing — result of the film. “All Gary, Tim and I do all day is work out,” he enthuses. “These big budget moves are the best. My trailer is larger than the house I grew up in. And the workout trailer is twice as large as my trailer. All we do is lift weights because, on these big budget Space movies, your job is basically to wait around all day. You do the acting part for free. Somebody will come to your trailer and say, ‘Yeah, your stunt guy just jumped off the spaceship and you’re going to do another take.’ I say, ‘OK. I look good?’ And the guy will say, ‘Yeah, he looked really good.’ I say, ‘OK, I’ll be in my trailer. Tell me when lunch is. Wake me up.’ That’s what you’re paid to do. It’s great.”

As the conversation ends — O’Connell needs to race to the airport in order to make a plane taking him back to the Mission to Mars set in Los Angeles — the actor is asked to describe one Mars scene that epitomizes just how immense a production moviegoers can expect. O’Connell smiles broadly. He’s up to the challenge. “I’ll give you one example,” says the actor, who just sold his first screenplay (First Daughter, about the US President’s college-age kid falling for a guy she doesn’t realize is an undercover Secret Service agent) and will soon begin shooting Buying the Cow, a low-budget romantic-comedy. “I’m in the cockpit of this spaceship that is going to Mars. Gary Sinise and I are there and we’re having a conversation. There I am in my spacesuit, sitting in the cockpit, with all of the lighting and everything. It’s really fun because it’s like you’re playing Space, but the ship is really there and the spacesuit isn’t something that your mother made for you out of tin foil.

“The shot starts out. It’s a shot of the entire spaceship and then it comes into a close-up of Gary and me. They built the cockpit set, which is about the size of a medium-sized living room. That’s all they had. Everything else will be totally computer-generated. The only time I actually work with anything tangible is if there’s another actor in the scene with me or I’m actually sitting in the cockpit. Other than that, I’m acting completely to air, to blue screen. It’s all going to be Industrial Light and Magic. We watch ourselves joke at dailies all the time. Right before we say ‘Cut’ (on set) we go, ‘Hey George, how’s everything doing in San Fran?!’ Mission to Mars is going to be a massive, massive special effects film. You realize how computer generation is really taking over the film industry.”

“As an actor,” he speculates, “I think my days are numbered.”