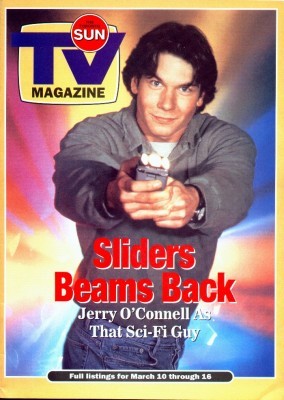 “I’ve always been known as the fat kid from Stand By Me,” admits O’Connell, 22, who has since grown sleek and strapping.

On Sliders, which has just returned to TV as a Friday night companion to The X-Files, his character is a physics genius who slips between parallel Earths with a group of friends.

No math whiz in school, O’Connell was an honors student nonetheless and although he’s spent more than half his life in show-business, education always came first.

Training in acting and dance in grade school in New York, he was acting out even earlier, dressing up in grade four as General Douglass MacArthur as a joke on his Japanese-American principal.

Early jobs included a chocolate chip commercial — he can still belt out “Crispy chewy yummy Duncan Hines tastes crispy chewy, tastes great — like my Mom’s does” — to prove it, and a part in Water Music, an off-Broadway biography of all-terrain actress Esther Williams.

Cast as Stand By Me‘s chubby, chicken-hearted Vern, the Greenwich Village resident hit pay dirt. Professionally and, more importantly since he was 11, playfully.

“The biggest trees I’d seen were in Central Park and now I’m in Eugene, Oregon. It was the best summer of my life,” O’Connell remembers.

For O’Connell, acting remained an extracurricular activity instead of a full time job.

“You hear horror stories about child stars,” he says.

Another major influence was actor Derek McGrath, his co-star from 1988 to 1991 on the Canadian adventure series My Secret Identity. From age 15 to 18, O’Connell-who grew a foot during the show’s run-played a teen turned superhero after being exposed to a radiation experiment.

“Working with Derek on My Secret Identity in Toronto were three of the best years of my life. We had so much fun on that show,” he remembers.

McGrath and O’Connell’s father Michael, a realtor who took time off to live in Toronto as his chaperone, remain good friends.

Because he’s done so much work in Canada — Sliders shoots in Vancouver — O’Connell is often mistaken for a Canadian and has toyed with seeking landed immigrant status here.

“I love it so much,” he says of his sometime-adopted country.

“You can’t see the air. I find myself going outside a lot more.”

“I figured I’d do acting on the side while I was going through college and I found a happy balance between the two and was able to work and go to school,” he says.

The only time he took off school was for a part on the short-lived ABC sit-com Camp Wilder. Everything else, including the telefilms The Room Upstairs,, The Ranger; The Cook And The Hole In The Sky and the movieCalendar Girl, were restricted to summers and holidays.

For one NYU project, O’Connell made a 10-minute film about an unemployed actor who sits at home talking to himself and listening to the messages on his answering machine. But when Sliders went on hiatus after a spring run last season, he wasn’t waiting for the phone to ring. He was filming the Fox movie of the week Blue River and Joe’s Apartment, a David Geffen-produced feature for release this summer.

The Joe of the title is a New York newcomer whose only friends are the cockroaches that infest his tenement apartment. The role required O’Connell to eat a couple of the crawlers.

“They were clean,” he protests.

“They were Hollywood-breds. You know, it’s not like they were running around the subway gathering up bugs.”