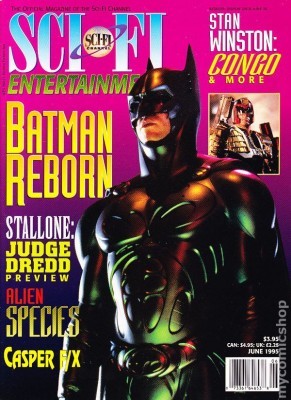 Britain squashed by the American revolt. She then renamed her territories the British States of America and retained her grip through the centuries. Today, the country’s citizens read the newspaper BSA Today over afternoon tea, keeping track of the doings of Parliament and the affairs of the ruling family, content in their role as part of the greatest empire the world has known.

This universe is one of many alternate worlds to be visited in Sliders. Drawing on the Irwin Allen tradition of following travelers on a sojourn through a strange and threatening world (i.e. Valley of the Giants, Land of the Lost, ad infinitum), and borrowing Quantum Leap‘s device of skewing our perspective on the world we inhabit, the program’s bid for success seems based on a cagey mix of the familiar and the fresh.

Heading development and production are executive producers and co-creators Tracy Tormé and Robert Weiss. Tormé is known to fans as a former story editor and consultant on Star Trek: The Next Generation; Robert Weiss is a veteran producer of such films as The Blues Brothers, Kentucky Fried Movie and The Naked Gun.

“If alternate worlds do exist, someone will discover them by accident, a scenario which we mirror in our show,” adds Tormé. “In Sliders, our lead character is not looking for parallel universes, but it happens when he’s working on something else.”

The two-hour pilot, which aired March 22, introduced Quinn Mallory; (Jerry O’Connell of Stand by Me), a college student whose work on an antigravity device inadvertently opens a “wormhole” that tunnels to a nexus joining an infinite number of parallel universes.

“During the early stages we described the project as a sideways version of Time Tunnel, but instead of focusing on time travel, Sliders is always set on present-day Earth, which distinguishes it from most other sci-fi shows,” says Weiss. “In some cases, the worlds are completely unlike our Earth, but in those instances where everything appears the same, the changes are very subtle. When Quinn first discovers the wormhole, he steps through it, still finds himself in the basement, and figures that the whole thing is a bust, but when he drives to the university, he stops at a red light, and people start honking and shouting all kinds of insults. Then, when he goes at a green light, he narrowly misses being hit by traffic — he finally realizes that the experiment has worked, because he’s in a place where green means stop and red means go.”

In the pilot, Quinn and his friends became stranded thanks to a short circuit of the remote control mechanism. The show’s title refers to the dimensional traveler’s ability to slide from one parallel world to another in their attempts to return home.

“Quinn is certainly a young genius, but you wouldn’t necessarily know it, because he looks like an average fun-loving, likeable college kid,” says Tormé. “Wade (Sabrina Lloyd), who works with Quinn in a computer story, is the adventurous 1960s-type gal. Meanwhile, Arturo (John Rhys-Davies), feels very under-appreciated — he has this really interesting mix of security and ego. In an alternate world, the parallel Arturo is much more likely to be evil than the other characters. Finally, Rembrandt (Cleavant Derricks) used to be with a rock group, but his career has gone downhill since he walked out on them in a highly publicized dispute. When we meet Rembrandt, he’s trying to make a comeback, but en route to the comeback, he’s accidentally swept into the wormhole, so he certainly is an unlucky part of their experiment.”

Tormé’s script for the pilot is a cold warrior’s worst paranoid fantasy, with America living under the iron fist of Soviet rule, inspired by Jack Webb’s 1956 television film Red Nightmare (released on video as The Communists Are Coming!). Especially befitting the show’s San Francisco setting is another Tormé-scripted episode, The Summer of Love, with the 1990s reshaped to resemble the 1960s and Australia recast as Vietnam; Tormé cites this episode as an example of how the series creates a subtle shift in the perception of real-world events.

Also on the way are episodes depicting the legacy of a Nazi victory in World War II; a world under attack from a virulent, unkillable virus; and, in a lighter vein, The King is Back, an episode where Rembrandt is a rock star who is bigger than Elvis — and, until the Sliders arrive, just as dead.

Eight episodes — each sojourning to a different “what-if” world — are on order for the series; cast and crew are sincerely hoping that they don’t “slide home” too soon.

The Summer of Love