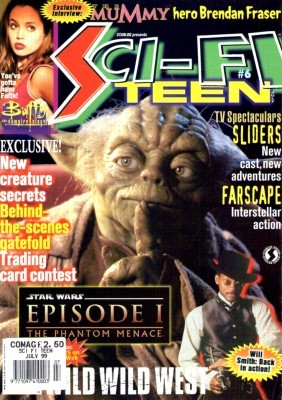 The Pressure is on. The freshmen cast members of the 5th season of Sci-Fi Channel’s popular series Sliders are filming a scene. Here’s what’s going on: Robert Floyd is lying on a couch, looking sick as a dog. Tembi Locke is tripping over her dialogue. She attempts the phrase “The quantum ripples may have upset the phase balance with in his recombinant matrix.” She flubs it (you try saying that 10 times fast). The script supervisor barks out the line from off-screen to help her. Finally, Locke gets it right. It took awhile, but not even Hal 9000 could have nailed those lines on the first try.

And Floyd and Locke have an even greater challenge to face: will the fans accept Sliders, which begins June 11th, now that the O’Connell brothers (Jerry and Charlie) are no longer sliding?

Break time. Floyd slides over to his private trailer. It’s sweet — he has a private CD system (mono is on), mini-fridge, couch, AC and munchies. Being on a hit show has some perks! The actor gives out a wholesome vibe; in fact, he’s totally “apple pie” — the kind of guy who takes spiders outside instead of squashing them. Being the actor replacing Jerry O’Connell, whom Sliders fans practically vigilize, is a mighty task, but Floyd deals with it by going the “I’m OK, he’s OK” approach. “Jerry’s character , Quinn, was so dynamic,” he praises. “I have to keep on my toes at all times.”

The actor needs to know a lot about O’Connell, since his own character Mallory has “absorbed” O’Connell’s Quinn inside him as a result of a sliding accident. “The first storyline deals with myself and Quinn becoming one,” Floyd explains. “We don’t get along too well in one body and try to split apart. It’s like two people fighting for control.” This explains the scene where he’s on the couch, looking hung over. Then there are times when Quinn is in another dimension and Mallory shares his experiences. “I call it ‘Jerry Vision,'” Floyd smiles. “Things that Quinn sees happen in front of me, and I can’t distinguish what’s real and what’s not.”

Floyd is determined not to copy O’Connell’s style, and reveals, “In the first episode I had to do some Quinn-like ‘dry wit’ lines, but now we’re steering away from mimicking Jerry. With these kinds of fans, if you copy him, they won’t appreciate it.” Thus, Mallory’s wit will be more self-effacing. “It’s fun for me,” Floyd adds, “because I love to make fun of myself.”

Instead of going the brilliant scientist route a la Quinn, Mallory is a con man. “I can quick-talk my way into being a brilliant scientist,” Floyd comments, “but in fact I have no idea what I’m saying. Where Quinn would figure his way out of things and use his intelligence, I tend to use my charm and a little bit of luck.” Maybe Floyd takes a cue from his favorite science-fiction character, Star Trek’s Captain Kirk, who would often turn on his charm (usually with the ladies). “Kirk was so cool,” Floyd raves, “His girlfriends were always different colors — blue, green — and it didn’t not matter to him one bit.” Hmmm, maybe there’s something more beneath Floyd’s All-American exterior after all.

The mood inside Locke’s trailer is decidedly more hip. She grooves some Lauryn Hill while waiting for her sister to show up (“She’s coming over to raid my fridge!”) and reaches out for some sympathy over the dialog she has to memorize. “Today is gonna be infamous as the crazy line day,” she says. “I graduated with honors, but I never thought I’d have to learn physics. Now I’m here today, and I have no idea what a quantum matrix is!”

Locke plays Diana Davis, “a scientist who is a specialist in the technology of sliding,” the actress explains. “The sliders come into my world and my mentor, Dr. Geiger, turns out to be diabolical. We end up destroying him and, since I have nothing left in that world, I join the Sliders and travel with them.”

As their jaunts go on, Diana ends up becoming a technical consultant for the other characters. “Since Quinn absorbed into Mallory, I’m the person to answer all the questions — the wealth of knowledge.”

It’s not all technobabble on the show, though; in one episode, the sliders go into battle. “Diana goes from being a bright, aspiring scientist to having a gun!” Locke laughs. “And it’s a pretty big machine gun too!”

Locke really gets to show her stuff (acting skills that is) in another episode where she confronts her own double. “She is me in another dimension,” the actress explains. “She took a different turn, though, and dropped out of school, is a single mom and doesn’t have a lot going for her.” Diana feels sorry for her double, but when she tries to change things, she screws up and (whoops!) creates a third Diana. “I call the Good, the Bad and the Ugly!” Locke quips. And, contrary to what you might think, the Diana isn’t the good one!

Getting into the mind of a physicist is the most difficult part of Locke’s role — far more challenging, says, than working with the show’s special FX. For research on her character, Locke went straight to the hands that feed her (or, more specifically, watch her). “Since there is no other show like Sliders,” she explains, “I went to the fans. I found that they know everything thing all the episodes and can tell you what works and what doesn’t.” To help her specifically into the role of Diana, Locke looks closer to home. “I take a lot from my mom. Diana is very career-driven, just like my mother, who is an entrepreneur.”

On their way back to the set, Floyd and Locke pass the food services truck. An actor in full alien makeup, who appears in the next scene, munches on a white bread sandwich. Watching him force food between his prosthetic lips (and then try to catch the crumbled debris before it drops to the floor) is painfully comic, and sets just the right mood for Locke to confess her annoying habit on the set. “I have a tendency to graze throughout the day,” she admits, “Sometimes I get food in between my teeth, so I’m always saying ‘food check!’ before my takes.”

Just then, Kari Wuhrer, who plays Maggie on the show, burst into the scene. “I just want to say that teenagers should be allowed to do whatever they want with their hair,” she blurts out. “It’s a form of self expression.” Talk about non sequiturs, Kari! She clarifies, “This season I was thinking of having psycho-animated punk-rock Maggie with purple hair!” The producers didn’t go for it, though, because the new episodes are going to be less comic-book-style and more dramatic. So Wuhrer sports a more conventional, natural hair color (and looks good in any coif).

Wuhrer then bounces onto a completely different subject: “Did you ever notice that there’s no blue food? Or purple for that matter?” she has quickly proven to be more unpredictable than watching an alien try to catch sandwich crumbs in his mouth. If the new season of Sliders is half as much fun as it’s cast is in real life, then it should generate some first-rate entertainment — even in an O’Connell free zone.