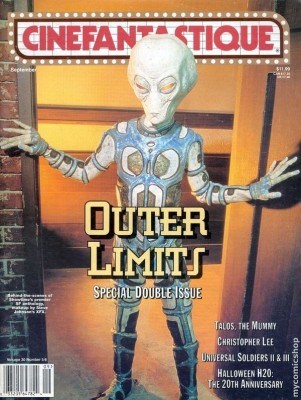 Most television series have a large number of staff writers, a trend that has its advantages and disadvantages. Having many writers on salary means that the series’ executive producers have a pool talent familiar with the show, and thus a guaranteed number of producible scripts — always a palliative to executives’ ulcers. The down side, however, to having many writers on salary is that many writers are on salary, which adds to the show’s cost. In addition, a large staff can increase the number of rewrites, which often leads to the sense that the series is being written by committee — tremendously frustrating for staff writers and freelancers alike. Sliders‘ fourth season will take a more cost-conscious approach, with only four staff writers, most of whom have a track record with Universal.

The Sliders staff is headed up by executive producer David Peckinpah (nephew of Sam). The sole veteran of Sliders‘ days on Fox, Peckinpah took up screenwriting at a friend’s suggestion after his prose sales proved less than lucrative. He broke into series television on CBS’s Beauty and the Beast, where he was introduced to prose science fiction by award-winning fantasist George R.R. Martin. “I came on Sliders due to a situation with Universal,” he explained; “they wanted to bring me in on a development deal, and they were looking for someone to run Sliders. They had the writing staff and at that point they had a producer, Alan Barnette, who had been on the show for a couple of seasons.”

Peckinpah controls the over-all vision of the show, but intends to step back somewhat from actual scripting. “I’m probably going to direct this year more than write,” he said. “I’ll be directing three or four. I wrote the first episode, I may write the last episode. But [Marc Scott] Zicree and [Bill] Dial and [Chris] Black are all really good writers and they’re probably going to be doing three or four episodes each.”

Co-executive producer Bill Dial, brought on by Peckinpah, is one of a comparatively small number of television writers who has written for hour-long dramas and half-hour sitcoms; his credits include Star Trek: Deep Space Nine, Star Trek: Voyager, and WKRP in Cincinnati. “I’ve done comedies and dramas and two-hour movies,” he said. “Most recently I co-created and executive-produced a show called Legend for the United Paramount Network — it starred Richard Dean Anderson, and it was a Western, although it did have some science fiction elements to it.”

Despite Dial’s credits in SF-TV, he admitted that he does not have a strong ground in science fiction; his focus is heavily tilted towards characterization. “I’m essentially here for history and I’m here for drama and for comedy. And what I’ve tried to do is consider what life must be like for people like Quinn and Maggie and Rembrandt who have been doing this. Essentially they’re homeless people, and their lives aren’t under their own control. And Quinn, all of them, have gone through horrible tragedy — I mean, there’s got to be some kind of psychological toll with what they go through. I put myself to thinking about that. What is it like emotionally for these character? What kind of road are they traveling aside from going through that wormhole? What is it doing to their heads? What is it doing to their relationships? So that’s where I’ve been working.”

When Dial needs to consult regarding the speculative aspects of the series, he usually turns to Marc Scott Zicree. Zicree, who grew up watching the original Twilight Zone and Outer Limits, and decided he wanted to be a writer when he saw Harlan Ellison’s Hugo — and WGA — winning Star Trek episode City on the Edge of Forever, believes his familiarity with the genre was a large part of landing the job.

“Basically, because I’d been on as executive story editor on Beyond Reality, which was a USA cable show, Manya Joblin, who’s a VP with USA and with the Sci-Fi Channel, knew and liked my work, and she recommended me to David Peckinpah and David and I met and hit it off,” Zicree recalled. “I think also David was looking for someone with a lot of science fiction experience, and I think the fact that I’d written the book Twilight Zone Companion, written for Star Trek: The Next Generation, Babylon 5, Beauty and the Beast, Forever Knight, Twilight Zone, etc., etc., convinced him that I really knew the genre and would know what had been done and what hadn’t been done. Because I think we both had the goal of doing stories that were fresh.”

The fourth member of Sliders’ writing staff, executive story editor Chris Black, never expected to write for television. “I went to USC film school and always wanted to work in feature films and thought the best way into that would be to write.” Black has discovered he loves writing for television.

Although Black’s first script is one of the darkest of the season, his first love is comedy. He greatly admires Darin Morgan’s work on The X-Files. “I would love to try and do that on this show,” Black said, “and to generate some of the episodes that really have bizarre twists and are fertile ground for comedy and yet without undermining any of the integrity of these characters or sabotaging the seriousness of what their quest is and what their mission is, to really exploit the comic possibilities of some of the worlds they might slide into. And hopefully if I wind up writing a couple more scripts this season, I’ll get a chance to do that.”