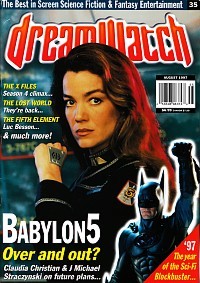 Dreamwatch: What prompted you to audition for Sliders?

Kari Wuhrer: I didn’t audition. The just called me up and gave me the part.

I had previously done a show for Fox, and I guess they must have viewed the tape, liked what they saw, and decided to offer me the part. But I must admit that I love fantasy a lot. To me, this is the most fun you could ever have.

I think they wanted someone who could combine strength and sexuality, yet had an appeal to a younger audience. I sort of have this cult following from my work on MTV. Also, I have appeared in several movies made for younger audiences, such as Beastmaster II.

How different is working on Sliders than anything you have done before?

When you are doing serious drama, you can’t very easily run from dinosaurs to zombies and vampires, or walk around in a world of fog. I mean you certainly can’t do that on a show like ER! In Sliders, you get to really stretch and play.

What can you tell me about your character, Maggie Beckett?

She is an ex-military fighter pilot who is on a quest for revenge: her husband was killed by her commanding officer, Colonel Rickman [Roger Daltrey]. So she joins the Sliders and starts going with them, because Rickman is sliding ahead of them. She leaves the military to join up. She still has a very tough military attitude. I found that really hard at first, but I have grown to like it.

What was it like to work with Roger Daltrey?

He has become a great friend, he was so much fun. He has such a lust for life. He has so much energy and passion for everything that he does, it was really inspiring.

I remember the first film I saw at the cinema was Tommy. My mother took me. And I was really afraid of The Who, because that film really scared me. I was five years old at the time, seeing all these being coming out of the television, and this boy being blind, dead and dumb. It was kind of freaky, especially at that age. However when I actually met Roger, it was so funny to see how little and sweet he is. He was nothing like I thought he was going to be.

Describe the chemistry between yourself and the rest of the cast members?

It has been great. John Rhys-Davies’ character was killed off and I replaced him. It was hard coming to a show that was already established, replacing a beloved friend on the cast, although it wasn’t like I was replacing him. They were just making some changes. But if you tap into the Internet, there were lots of letters posted giving me a hard time. It was as if they were blaming me for that change. Having said that, I do get a lot of positive letters about how people are enjoying the change. The other cast members accepted me so openly. We became friends and it was great.

I think the chemistry between the four Sliders now isn’t just this thing where we always get along in a chummy atmosphere. Now, with the introduction of my character, there is this little bit of conflict between them, which is great because conflict makes for a better show.

Tell me about some of that conflict.

Wade [Sabrina Lloyd] doesn’t trust Maggie. She is a little put off by the fact that there is this new woman, who is tough and bossy, who is sliding with them when she was the only woman before. So there is a bit of the jealousy factor. Also Maggie is the first one to pick up a weapon and defend the team, which takes away from Quinn’s solitary heroism. There is also a little sexual tension between her and Quinn, which can make everyone uncomfortable. Rembrandt used to be in the Navy, so there is a couple of challenges going on there. Although it must be said that basically we all care about each other. I think that Maggie makes everyone go that little bit further than perhaps they would have.

Do you think having two male and two female characters creates a bit more balance?

I think that it brings Wade up to a different level now. I think that there is more expected of her now, to be more of a team player. She is not just the computer genius any more. She has to be tough in other ways, because she doesn’t want to be the only one who is weak. Because of what Maggie can do, it is forcing her to rise to the occasion a bit more now. Wade can’t play on the three men in the way that she may have done before.

Has there been anything on the show so far, that has stood out for you?

Jerry O’Connell is so funny, he and I just joke around all the time. When we were doing an episode involving this alien that I end up swallowing, which takes me over, and I have to find men to breed with in order to lay eggs, I had to play this sexual and alluring vamp. Although I have had experience of that in the past, I found it difficult to get back to that, after gearing myself up to playing this tough character. It was funny, I had this big phallic-like alien coming out of my mouth. And during filming these scenes, Jerry and I could not help ourselves. We found the obvious childish humor in it. We kept on making jokes and laughing the whole time, which helped to ease the tension a lot on the set for everybody.

I remember during the first couple of episodes I was a little bit stiff, not just because of the character, but because I was working with Roger Daltrey, and a new cast entirely, who could have resentment towards me. So it was hard to snap into this easy-going character. But I worked hard at it, and by the third episode that I was in, Sole Survivors, I had a much better grasp on it. The cast and crew made it easy, but it was difficult trying to be a tough character. I have never really played anyone like Maggie before.

Although you have only been there a short period of time, do you have any idea where your character is going to go?

As the season progresses, you find out that I can’t live with them on their home world because I can’t breathe. The atmosphere in their dimension is different.

The aim of the rest of the Sliders is to get back home. By the end of this season everybody’s mission is accomplished. So the dilemma for my character is, what does she do now? Does she still slide with them, or hang back. Quinn and I have developed a real friendship, and we don’t want to split up, but I can’t go home with him. So Quinn decides that he will have to find a way for her to breathe when they get there. Then we end up sliding into this other world at the end of this season. So it is left open as where we are going to with it from there. Whether I can live with them on their world, or if I can keep sliding with them. I think that is interesting.

Do you think you will be able to adjust easily to working to such a long episodic schedule?

This time I did nine episodes. I worked on a series before where I did seventeen episodes. When I worked on Swamp Thing, I did twenty. Also, I have done about twenty low budget feature films, where I worked for seventeen, eighteen hours a day.

On Sliders it was hard at first. It got exhausting running and jumping, and kicking and fighting, every day. I have more bruises on my body than I have ever had in my life. It was difficult but I am geared up and ready to go for next season. I hope we get fifty episodes! Because all of a sudden now that we have stopped, I am going through this withdrawal.

As an actress, what are you hoping to gain by working on Sliders?

The exposure is really good. I like being part of the Fox network. They are like a real family. I am hoping to be able to go on to different projects on Fox if this one doesn’t continue to grow.

Has there been any indication that it won’t continue?

They do this with every show. We never know what is going to happen until May. I think the show will get picked up again. Not just because of the increase in viewing figures, but because the show has only got to go run for fifteen more episodes before it gets picked for syndication. Which would mean a lot of money for Universal Studios. Whether Fox does it or not, we are definitely going to go.

I think that Fox are now just learning to stand behind their shows. They have had a lot of experience with that, with Party of Five and The X-Files. They are learning that it is a partnership; that you can’t expect shows to do really great out of the gate. It doesn’t really happen that way. This is the first full season of Sliders for Fox.

How did you feel about John Rhys-Davies leaving?

Of course, I worked with him on the first couple of episodes that I did. I found him to be a really wonderful man and teacher. He is really talented and experienced, he was a great support system for the rest of the cast.

I feel a little bit disappointed that I am not going to get work with him again. He has got other things that he is moving on to. It is always great to work with someone who is as generous as John. Now that he is not going to be there, I look it as a challenge where I get to tap into what I have learned; to make my own choices and my own decisions, and trust myself.

You have also been working on Anaconda.

People are going to love it. It is about a giant snake that a documentary film crew comes across in the Amazon jungle. The snake itself is animatronic and CGI, and the blend of the two is ground breaking. I think it looks better than Jurassic Park.

I play the production manager of this documentary team. There are seven of us on the boat, and we all take part in figuring out what we are going to do with this snake, until it is too late.

Have you found it particularly difficult working with special effects?

I love it. I have chased around and run from a piece of tape on a grip stand a lot. It is hard to do, but interesting. On the show, we did an episode again with dinosaurs, and you are running from nothing. In Anaconda we were screaming and reacting to this grip stand with a fake head on it. It really challenges your imagination, but in the end it all comes together.