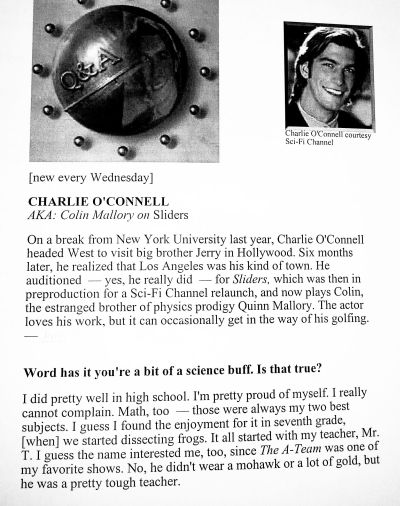 He auditioned — yes, he really did — for Sliders, which was then in preproduction for a Sci-Fi Channel relaunch, and now plays Colin, the estranged brother of physics prodigy Quinn Mallory.

The actor loves his work, but it can occasionally get in the way of his golfing.

Word has it you’re a bit of a science buff. Is that true?

I did pretty well in high school. I’m pretty proud of myself. I really cannot complain. Math, too, those were always my two best subjects.

I guess I found the enjoyment for it in seventh grade, [when] we started dissecting frogs. It all started with my teacher, Mr. T. I guess the name interested me, too, since The A-Team was one of my favorite shows.

No, he didn’t wear a mohawk or a lot of gold, but he was a pretty tough teacher.

Had you been a sci-fi fan before getting the Sliders gig?

Who got the acting bug first, you or Jerry?

We started acting at pretty much the same time, doing commercials in New York. And one summer at camp, when I was 5 and Jerry was 6, we were in The Wizard of Oz together.

Our mom just sent the tape out here. I was a Munchkin and Jerry was the Cowardly Lion. Then the year after that I was Bert in Mary Poppins, which was absurd because I think my voice was deeper then than it is now.

So here’s this little 3-foot-tall kid singing “Chim-Chiminey” with this voice… it was just funny.

When did you decide that this was what you wanted to do?

Around that time, I guess. And later I did an off-Broadway play called Dr. Selavy’s Magic Theatre by Richard Foreman. That was great — David Patrick Kelly was in that, too. I played him at age 10.

I don’t know how much I got out of it at that age, but I knew I liked it. When we were rehearsing a scene once, the director told me, “Now this guy’s going to come at you with a knife. And when he does I want you to scream bloody murder.”

So we ran the scene, and I had no idea why we stopped when I screamed, “Bloody murder!”

I thought I was giving him just what he asked for. The director would sit on a chair on top of a table during rehearsals, and he pretty much fell off it when that happened.

So you take direction well. What kept you coming back?

I was in fourth grade, and I loved it. Being the only kid in the show, I got pampered by everyone else. I’d get a new toy every day.

That’s what kept me coming back — I got bribed.