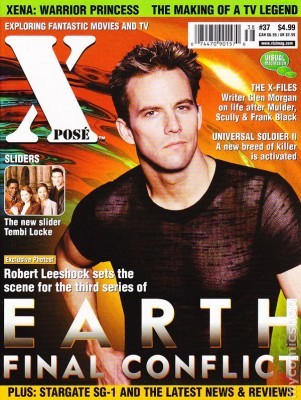 In her own words new Slider Diana Davis is, “a pampered, hyper-achieving, always eager to be first, daddy’s girl.” At least, that’s the person who leaps into the vortex at the end of season five’s opening story The Unstuck Man. By the season finale, The Seer, Diana will have learned a few lessons about life having faced such mind-blowing dangers as the invading Kromaggs, sea fearing pirates… and even workers from a fast food restaurant dressed as clowns!

“I’m sort of on the cutting edge of quantum theory and I’m a princess type who hooks up with the sliders,” continues Tembi Locke, the vivacious actress who plays Diana. “By a chance of fate they slide into my world in the middle of a big experiment and it sort of goes awry and I have to join them, because they are doing in practice what I’ve always studied and know in theory.”

On her home world, Diana was Assistant Director at the Geiger Applied Research Center. As The Unstuck Man opens, the experiments of Dr Geiger have caused two of the established sliders to be lost: Colin (Charlie O’Connell) becomes ‘unstuck’, while Quinn (Jerry O’Connell) becomes fused with his alternate from that world, Mallory (Robert Floyd). Faced with the reality that Geiger’s experiments are unethical, and taking some of the responsibility for Mallory’s present condition, Diana travels joins up with Rembrandt (Cleavant Derricks) and Maggie (Kari Wuhrer) on their epic adventure.

Raised in Houston, Texas, Locke lived in Italy for 18 months on an exchange program before moving to New York to begin her acting career. She’s appeared in As The World Turns, Martin, Fresh Prince of Bel-Air and Beverly Hills 90210 on TV, and her film credits include Mother and the Shaquille O’Neal feature Steel. Locke won the role of Diana after a very relaxed audition where she “hit it off” with executive producers David Peckinpah and Bill Dial, who were impressed by the young lady’s boundless enthusiasm and charisma.

“I liked the character,” she enthuses. “The rest is sort of actor history: you audition, then you go and meet the network people.”

Although Locke was aware of the series before joining the cast; she admits that she hasn’t followed it avidly over the years.

“I’d seen it a few times. A couple of friends of mine had done the show a few seasons back. Once I got the part I got a lot of back episodes and the show bible to learn about it a little more.”

As the fifth season made its debut on the Sci-Fi Channel recently, fans have been watching with a mix of anticipation and trepidation. With leading man Jerry O’Connell departing after four years, and his brother Charlie also calling it a day, the series has by necessity undergone a major revamp. Fortunately, it seems to have pulled through, as the repercussions of The Unstuck Man present some interesting new story arcs and Locke and Floyd make extremely likable new regulars.

“I didn’t find [taking over from the O’Connells] to be too much of a challenge,” the actress admits. “It was more a case of, ‘This is a show that’s been around, how do you come into that and live up to it?’ How do you become another cog in the wheel so that the audience will appreciate and dig your character right off the top? We weren’t exactly replacing them, they created new characters so it wasn’t as if you have to live up to someone else’s work, but you do have to make people still love Sliders.”

The change in line-up has also shaken up the male/female ratios of the cast. Last year, Sliders had a bit of a ‘guy thing’ going, as Kari Wuhrer was surrounded by three male leads. Now it’s more equal, harking back to the days when there were two females in the cast.

“I love the woman being the smart one,” grins Locke. “I know everything. It’s also really nice because we have two totally different types of women; Maggie’s background is that she’s from the military and has this ‘kick-butt chick’ thing going. Diana’s more reserved, the brains of everything, so I learn from her and she learns from me, so that’s really nice.”

Asked to define each character’s role, the actress provides a succinct answer.

“Mallory is the jokester of the group — the wise ass. Kari is the tough one, Cleavant is the heart and soul of the group, and Diana’s there to go, ‘Guys this won’t work!'”

Diana’s time as a Slider promises to be a journey in more than just the physical sense. She’s a character who has plenty to learn, as she finds whole new universes to explore.

“When we meet Diana everything she knows about quantum physics is theory,” explains Locke. “She has obviously never traveled to another dimension, so when that happens her whole world turns upside down.”

As an example, the actress cites season five’s second episode Applied Physics, which opens with a cozy picnic scene as Diana watches a child playing. Delight turns to horror when she sees the child’s mother — her own alternate known as Didi who dropped out of college as an unmarried mother. Working in a routine job, Didi faces a low income, disapproving parents and an ex-partner who threatens to cut off child support.

“When I mean my alternate that’s totally overwhelming and I don’t know what to do,” Locke explains. “I don’t like what I see, so I make a decision to alter her in some way and as a result I mix things up really badly.”

Proving that a little knowledge can be a dangerous thing, Diana tries to change Didi’s life for the better — but instead wipes out her daughter Nadine from history and redefines her alternate as an icy career girl.

“I deal with a lot of issues. What are the ethics of how do I fix things? We go into worlds and I have a lot more scientific than maybe people in that world have. So ethically what kind of position are we put in here?

“My arc really deals with finding out who I am for the first time outside of the lab, outside the protected walls of my studies. I have friends now and we’re thrown into these crazy situations.

“I’m still awkward socially. There’s this funny line where we go into a bar and I’m like, ‘This is really rowdy’ and they say, ‘What do you mean, you’ve never been out drinking with friends?’ And I say, ‘Well, I went to the student union in college. I had a beer or two!’ That’s Diana’s thing, she’s just now coming into her own.”

Another key episode for Diana is Strangers and Comrades, in which the physicist is thrown onto a battle-ravaged planet in hyperspace. Her comfortable world totally stripped away, Diana must confront the reality that sliding is not about the journey to paradise, but in fact can be the road to hell…

“Diana is a closeted adventurer, in the sense that she slides into a new world and says things like, ‘Can we go buy some new shoes?’ We get caught in these parallel universe and I’m sort of keeping up to speed and the Diana surprises herself when she knows what’s happening or seizes the opportunity. The veteran sliders have seen everything. They’ve been attacked by dinosaurs. Everything is still sort of new to us.”

As someone who enjoys outdoor activities — particularly running, hiking and fishing — Locke has thrown herself into the more active aspects of being a Slider.

“We’ve done jumping, we’ve done rolling down hills,” she says of the stunt sequences. “I had a fight with a Kromagg, wrestled with him. I’ve floated in a harness — suspended from the top of the studio. They use us!”

The actress laughs as she recalls one instance when she had wanted to take part in a stunt, but it was deemed to dangerous.

“There was one particular episode in which I was supposed to fly out of the vortex, but for whatever reason they thought it would be very dangerous for me. I sat back and though ‘How are they gonna handle this? What are they gonna do?

“So they get the idea that they are going to use this mannequin as me and just propel it through the air. I still didn’t say anything.

“A couple of hours passed and I walk into the makeup trailer and there is this life-size dummy made up like me with this totally messed-up wig that’s turned sideways. She’s like several shades not the color of me, her hand’s missing, her foot’s all crumpled up… I’m like, ‘That’s not me! You’re not going to use that!’ I was like, ‘Guys, from here on I’ll do it!’ There’s a part of you that really wants to do it, and when I saw that dummy I was like, ‘Who hired this dummy to play me!”

Chatting to the actress over lunch, it soon becomes evident that she shares few traits with her on-screen counterpart. The studious, sometimes serious Diana is light years away from the bubbly, fun and always laughing Locke. And while both of them have studied science, Locke admits that she devoted herself to biology in High School in order to avoid taking physics class.

“It’s a twist of fate that life would cast me as a physicist and now I have to go back and re-learn the stuff that I never picked up before!” she shrugs. “The joke was on the set when I got the job that I went out and bought ‘Physics for Dummies,’ so I’d know what I was talking about.

“I love science and since I got the part I’ve found that I watch a lot of more science-fiction and you sort of become more in tune to it. I pick up the articles in the paper, so it’s been a great addition to my life and experience.”

There’s not word on a sixth season of Sliders yet, but if it happens, expect Locke to be there. She’s enjoyed the past year immensely and, after all, how many other TV shows offer so much variety.

“We’ve slid into water, come rolling down hills… One week you may be playing two or three different people and the next week you’re tackling issues. Every day we come into work it’s so much fun and different.”