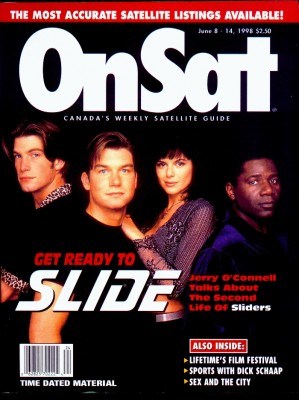 Talk about a bummer ride. After three years of ‘sliding’ from one parallel world to the next, Quinn Mallory finally slides into home only to find out that home ain’t sweet home after all. But on the up-side, his mother informs him he has a long-lost brother named Colin — roaming around on some alternate Earth.

And so begins the fourth season of the series Sliders. But there were more bumps in the slide. First, the show faced cancellation by FOX. On the up-side of that, it was picked up by Sci-Fi Channel. Then there was the 40 percent production budget cut. But hey, at least they’re on.

Another up that came from the bumps in the vortex, according to star, director and producer Jerry O’Connell (who plays Quinn Mallory) is that with the show’s move to Sci-Fi Channel, it is no longer the red-haired step kid of the Rupert Mudoch clan (at FOX). “You know, when you work on the Sci-Fi Channel, [the show] can be a little more intelligent because the fan base is strictly science fiction.” Indeed, the Sliders have come home, so to speak, even if it means fewer gigantic, man-eating earthworms due to budget restraints.

O’Connell, the former husky kid from Stand By Me and admitted sci-fi fan, nonetheless stands firmly by the show. “I think it’s going to be a really smart, hip show this season. It’s not just [the Sliders] chasing bad guys, or bad guys chasing us. There’s a little more depth there.” Returning to more traditional science fiction roots, the show will look deeper into storytelling. “I’m a huge fan of The Twilight Zone, and when you see those shows, it’s not about the special effects; it’s about the story and Rod Serling’s writing,” he says. “Early Twilight Zones were about the anti-Communist feelings in the United States. You can just see it oozing from the storylines without them ever commenting [outrightly] on it.”

This year, the Sliders itinerary includes a trip back to Earth Prime, where Kromaggs have taken over; a slide that finds Slider doppelgangers wreaking havoc; and a trip to a seceded California where Charlton Heston is serving as president. They’ll also take a closer look at more personal slots. Now that original Slider Wade (Sabrina Lloyd) has been sent to a Kromagg breeder camp, the sexual tension between Quinn and Maggie (Kari Wuhrer) will likely increase, and the bond between long-lost siblings Quinn and Colin (Charlie O’Connell, Jerry’s real-life brother) will be explored. And poor Rembrandt (Cleavant Derricks) continues to get dragged along for the ride.

Get ready to slide.