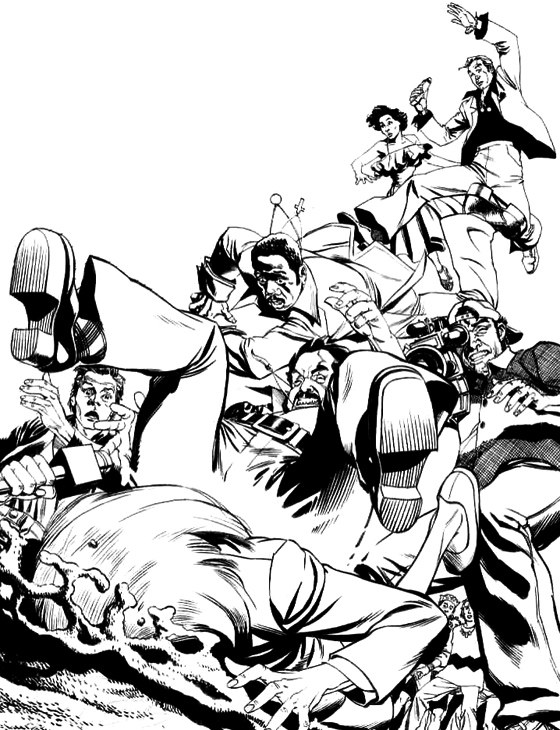 With "Get a Life," we've hit the mother lode. Not only is it a complete, unpublished script, but it's also a shout out to us, the obsessed fans who just can't let it go.

Comics vs. The Screen

When the Acclaim comic series was introduced, it was hailed as a way to do all the things the show could not given budget restraints, risky content, or technical limitations. Yet when all was said and done, almost every comic made its way on screen in one form or another. This raises a fairly obvious question: if all stories ended up on television anyway, why bother with the comics? In this essay, we'll take a look at how at how each comic stacked up against its on screen counterpart. It's print media versus electronic media. Who will prevail?

We're dealing with two plots — one driven by Wade and one centered on the evils of unfettered capitalism. Sound familiar? It should. It's "Season's Greedings" in space. Given the gap between the show and the comics team at this point, it seems unlikely one hand knew what the other was doing. Still, it's shocking that both mediums would write more or less the same story with the same beats independent of each other.

This had the makings of something huge. We were going to get our hands on what was being called a 'lost' script, something "too wild and too expensive" to be shown on TV. Unfettered by television restraints, what did we get? A lot of blood, a little splendor, and a whole bunch of crazy.

Unlike some previous entries, "Darkest Hour" succeeds in balancing the needs for comic book action with strong character development. The pacing is just right, there's time for thoughtful reflection, and and the drama is not necessarily in what's happening at the moment, but what might happen as our heroes sink deeper and deeper into darkness.

The America of "Narcotica" is indeed twisted; the War on Drugs is over, and drugs won. They are not only legal, they're mandatory; food is tainted with performance enhancers or worse, and the same is about to happen to the water supply unless — surprise, surprise! — our four can stop it.

Once in a while, a pivotal concept or teleplay will cross the desk of Sliders co-creators Tracy Tormé and Robert K. Weiss that’s quite simply too wild and too expensive to produce for the hit Fox TV series. Luckily for Sliders fans, there’s a comic series that’s ready, willing and more than able to pick […]

Sliders star Jerry O’Connell (Quinn Mallory) found himself sliding into another dimension, where heroes in bright outfits battle maniacal robots and aliens from distant worlds! There, Jerry and his brother Charlie spent the day meeting and talking with various wordsmiths and artisans, and taking some time out to pose with the natives. The name of […]

Free of his shackles, co-creator Tracy Tormé sends his four anti-heroes into their most daring and over-the-top adventure yet. Paced like a Michael Bay movie, "Armada" continuously raises the ante, putting its stars in ever increasing and improbable jeopardy, all the while blowing up as many things as possible.