"This seems sacrilegious." — Wade, eating a Jonah and the Whaler sandwich. 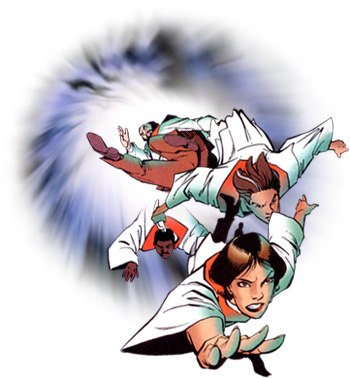 People don’t like formulas. The adjective formulaic is a negative one. When you see it in a critical review, it signals that the piece of art in question is a warmed-over regurgitation of something you’ve seen before — like any Olsen twin film. I argue that the only reason formulaic is bad is because the formulas themselves are so poor. If you’ve got a winning formula, there’s no reason to stray from it. Sliders has a winning formula — and “Ultimatum” executes it better than any other comic.

The Sliders formula can’t be defined as any one thing, much to the chagrin of Fox executives. The show is too broad to be pinned down in just one box. That said, you know it when you see it. Some alt-history jokes here, a little capture/escape/capture there, a withering Arturo one-liner — add an attempted overthrow of the societal order and voilà, there’s an episode of Sliders. Predictable? Entirely. But that’s not the point. A sonnet or haiku always abides by the same rules too. It’s what you do within the framework that matters.

In brief: After landing on a world where the rapture is seemingly underway, the four discover a sliding experiment created by a fanatical alt-Quinn is the real cause of the disappearances. Teaming with the exiled double of Arturo, the five travel to the world where the missing are being sent — only to discover a devil-worshipping society where alt-Wade has risen to power. To save both worlds from certain destruction, they need to seal the rift.

Pretty neat plot, no? But plot is often just a minor concern to the classic Sliders formula. Let’s take “Ultimatum” from the top and see how it checks out:

Detached, irrational teaser? Check! There’s no other reason to make the four dress up like clowns other than it’s funny to have them dressed up like clowns; just like it’s funny to have four hippies clinging to the top of the Transamerica Tower or have them file legal briefs to buy a hamburger. These teasers don’t exist to advance the story. They’re there to add depth to the multiverse, to show places that don’t merit their own adventure but are still worth visiting. It gives the reader the sense that they are along for the full journey, not just selected moments.

Time sensitive, socially relevant parody? Check! Everyone wants to be timeless. A comedian yelling “Where’s the beef?” is pretty much playing old folks’ homes at this stage. However, Sliders delights in tweaking the world’s actors of the moment as well as taking the long view. When “Ultimatum” was issued, the Republican Revolution and its associate rebellion, the Christian Right, were dominant players on the national scene. It only makes sense to see where they’d be in this alternate universe so devoted to the pure of faith. They’re on top and behaving as badly as ever on both Heaven and Hell on Earth. Equally amusing are people like Madonna and Traci Lords, who’ve made careers of pushing the envelope, suddenly singing a pious tune. Sadly, we don’t get to see such paragons of virtue like Bill Bennett running a casino on Damnation World. Too pressed for space, I guess.

Cool alt-earth props? Big check! While I lamented the loss of quality producers, writers, and actors as the series wore on, I really missed the first season prop team. The little touches they added to the background made a huge difference to creating the illusion we were in another America. “Ultimatum” scores big with the fast food parodies. Burger Pope isn’t particularly funny, but “2 billion served, 1 million saved?” That’s funny, as is a twisty straw shaped like a cross. It’s all so wonderfully blasphemous in that ‘only in America’ sort of way.

Character detail? Gosh yes! When we met these four characters, we knew precious little about them. Each week we’ve been pulling the onions of their lives back bit by bit. Rembrandt is in the spotlight as for the first time his ascent to stardom is examined in any detail. We also glean more about each slider’s worldview as they are faced with the possibility that end times are upon them. Rembrandt repents; Arturo flat out rejects. Oddly enough, it’s Wade who takes the scientific approach by observing and evaluating.

All of the above are genuinely considered good components of the formula, but there’s a reason why most Sliders parodies devolve the same way. “Ultimatum” hits all these downsides just as hard as the upsides.

Are doubles of our heroes in positions of improbable power? Triple check! Quinn’s alternate not only devised the machine responsible for the rapture, he’s also the right hand man of the most powerful preacher in America. Arturo’s double stands alone as the voice of reason and for his troubles has been elevated to the status of a latter-day Galileo. And as for Wade’s fiendish alternate, I don’t even want to contemplate her rise to power. The odds of Quinn’s double being involved in this story are pretty good. The odds of them finding Arturo’s double are also high as they specifically go looking for him. But by the time we reach Wade, these coincidences wear a bit thin, especially because it happens every week. We could visit a billion earths and not find another me doing any better than typing this crappy review.

Is the issue resolved by some techno babble that is never properly explained? Damn straight! Despite there being precious little leading up to it, a miracle solution is proposed at the last moment to close the rift by using alt-Arturo as a lens to reflect back the phase energy and melt the dimensional barrier. I mean, come on people, let’s not telegraph such an obvious solution the next time…

Does the slide window open just as the main action wraps up? Quick, name five episodes where that’s not the case.

But hey, that’s the formula. It’s by no means flawless, but it’s what we’ve wrought, and when executed properly it’s still one heck of a good time. The story is clever, sharp, and has exceptionally good flow. If I were to hazard a guess, the only reason we’re reading “Ultimatum” instead of watching it is because Fox was a little skittish on portraying the rapture as an ends for empowering devil-worshippers. Of course, this was before they discovered the drawing power of Paris Hilton.

The four are starting to evolve into their 2nd season forms. The general look is similar to its predecessor Armada, but there’s a better flow and use of page. The color isn’t quite as washed out either, giving it a crisper appearance.