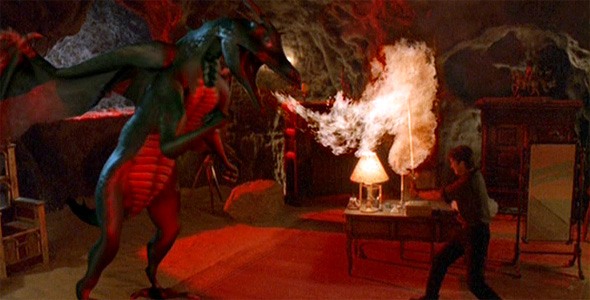 Quinn saves a beautiful girl (Melinda) in the forest and wants to do the right thing by her by returning her to her home. However, home is the castle of an evil wizard who wants to impregnate her with a child that he will take possession of to gain immortality. Quinn’s rescue attempt backfires when the dark mage mistakes Quinn for a wizard, and takes over his body. To save him, Arturo must prove Quinn is mortal and levels a lethal blow. Only Melinda has the healing power to save Quinn, but she must abandon a spell of beauty she wove over her burned face if she is to do so. Outraged, the dark wizard sends his most fearsome ally to attack them — a fire breathing dragon. Meanwhile, Rembrandt attempts to win the heart of a woman he once knew with a love potion, but the spell leaves him enchanted with Wade. 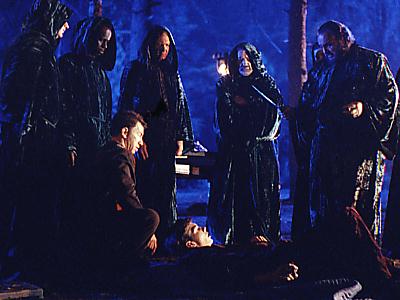 Circle of magic, chaste ring of white
Capture this man’s love at first sight.
Consecrate the flowers of this scent
and allow the wearer’s heart to claim
that which you have destined him to cherish.

Black flames that burn within join elements of eternity
from above and below.
Release my spirit so that I may dwell for all eternity within him.

Wade guesses The Druids came to North America in the 1300s because of constant harassment in their homeland of Britain.

The name of the area around Emrys is called New Briton. While there is Druid rule here, there are many in society, mostly professionals, who believe that spells and incantations are nothing more than myths and legends.

However, in Britain, the legend of King Arthur, of Camelot and of Merlin have become part of “New British History.” Such events and people are not considered fable, but fact.

Gareth was once in a position of power as the Chief Druid of Emrys but was impeached by the Council because he started using black magic to eliminate his enemies. It seems that over the course of many generations, some Druids have seen their powers evolve, like Gareth. He has become so powerful that no one dare challenge him.

Yet while Gareth was still revered in society, gifted 16-year-old Melinda, took an oath to learn the ways of the Druidic order, essentially becoming his apprentice.

Cops carry swords instead of guns. 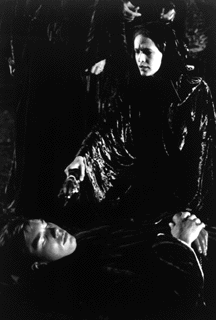 “There’s a difference between the Science Fiction audience and the Sword and Sorcery audience,” he says. “We started picking up numbers last year and then we did a show that was a rip-off of the film Dragonslayer where, in fact, Arturo kills Quinn and he is then brought back to life by a woman using magic. Any Science Fiction fan who saw that suddenly thought, ‘Oh, wait a minute. I get it. It’s a kid’s show and not Science Fiction after all.’ So next week, of course, we drop three points and never get those viewers back.”

In fact, ratings after “Dragonslide” dipped under a 6 rating and didn’t recover until 6 episodes later, with Slide Like an Egyptian (which rated a 9.7 with viewers).

The original Thursday satellite broadcast, sent out before the episode aired on Friday night, billed Charlie O’Connell as Charlie O’Donnell in the end credits. This didn’t deter him from speaking well on his sophomore effort on the show.

“Working on Sliders has always been fun,” he says. “Not that there’s any sibling rivalry between us, but I think it’s safe to say that I can act circles around [Jerry].”

“Dragonslide” is definitely an hour of television steeped in the third season production mindset, but with those caveats in mind – and the magic, dragons, crazy Druidic nonsense – it also includes powerful themes that attracted fans to the show in the first place.

In a mystical world whose belief system consists of magic potions, dragons and illusions, a practitioner thinks Quinn comes from a powerful line of wizards — and must be eliminated.

Lost in a field by Quinn and later retrieved (amazingly) by Arturo.