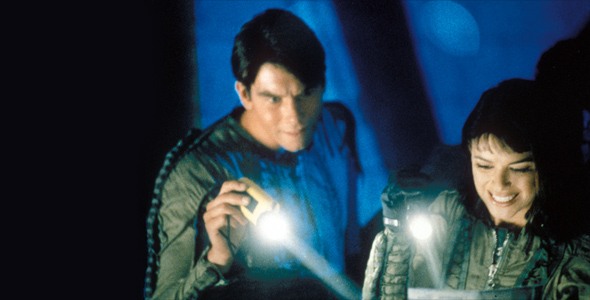 After angering a bunch of biker Indians, Quinn finally repairs the timer so it can track Wade and Rembrandt’s photon trail to Earth Prime. After landing in an apocalyptic Los Angeles, Maggie finds that her lungs have adapted so that she can breathe the atmosphere. However, Quinn is startled to see a Jeep of Kromaggs, an advanced race of ape, drive down the street. The Kromaggs have invaded this world and have destroyed most of the major metropolitan areas and shipped the women off to breeding camps.

Walking to the Chandler Hotel, Quinn and Maggie meet up with a resistance cell leader named Marta who knew Rembrandt and Wade well. Marta tells Quinn and Maggie that their friends were captured and enlist the aid of a computer hacker named Trevor Blue to gain entrance to the Kromagg Re-Education Camp. During the escape, Quinn rescues Rembrandt but is captured himself and is tortured by a Kromagg leader. During his torture, Quinn learns that Wade has been shipped off-world.

Meanwhile, Rembrandt, Maggie and Marta stage another rescue attempt to get Quinn back.

In a Kromagg detention center, Quinn coincidentally meets his mother, who reveals that he is not from this world and that his real parents are Sliders. They left Quinn and his brother with their doubles to guard their safety during the Human-Kromagg War on Quinn’s home world. Quinn doubts the veracity of his mother’s claim, but she digs into her arm and produces a microdot which she says will back her assertions.

Another resistance raid liberates Quinn at the cost of Marta’s life. Back at the Chandler Hotel, Quinn places the microdot on his forehead and learns his family’s back story, including the fact that he had a brother. Quinn decides he must slide to find his brother and to find a weapon that will destroy the Kromaggs, and Rembrandt and Maggie join him.

As Quinn and Maggie are leaving the House of Blues Trevor gives Quinn the Star Trek Vulcan “live long and prosper” hand symbol (a space between the middle and ring finger). Quinn, the consummate nerd that he is, shoots it right back at him.

After Marta, Maggie and Quinn open the first door in the detention cell, a poorly dubbed voice-over of Quinn saying “Kromaggs can really mess with your brain. Who knows what you’ll find” is not included in the closed captioning. The line apparently was put in later to explain to new viewers that Kromaggs have mastered mind manipulation (seen in Invasion) and that that’s the reason for Rembrandt’s initial reaction of disbelief upon seeing Quinn.

Kromagg Outpost 161 was invaded by the Kromagg Dynasty just three short months ago. The major cities were attacked initially, scoring “awesome casualties. San Francisco fell to the Kromaggs shortly after Los Angeles did and those who weren’t killed were taken prisoner. As such, the Kromaggs have prison camps all over the state.

Kromagg Double Prime was the site of a bloody interspecies war — Human versus Kromagg. Fought over 20 years ago, the humans finally developed a device that pushed Kromaggs off their world entirely. It’s unknown what caused the conflict, as it is known that the Kromagg and the Human populations lived in relative peace for a lon time before the war.

Quinn’s parents, Michael and Elizabeth Mallory, are two of the primary inventors of sliding on this world and are also largely responsible for the weapon that forced the Kromaggs to retreat to the safety of another world.

“It’s a fairly tough show; it’s dark emotionally, it gives the actors a chance to stretch, and I hesitated to make it so dark but to introduce a race of higher primates that are absolutely ruthless you need a rather dark palette,” says David Peckinpah. “The Sci-Fi Channel is willing to play ball with us, so we’re going for it.”

“We’ve also brought the Kromaggs back,” notes Marc Scott Zicree. “That’s the race of monstrous, other dimensional Sliders introduced in second season’s Invasion. They were characters that Tracy created that were offshoots of human ancestors, and we thought they were very good adversaries. I didn’t like their uniforms, and there were certain things that I thought were kind of geeky about them, but we’ve been able to address that. The whole idea of an offshoot race that’s more intelligent and more ruthless than man is very interesting, so we brought them back as our villains.”

Although the Kromaggs will be “ruthless and relentless,” the writers hope to make them more than Mongols of paratime by developing them as individuals and as a culture. Zicree explained, “Although they’re the enemy, they do have, from their viewpoint, a valid reason for what they do. So although we’re going to keep them as the adversary and fairly dark characters, we’re going to get to know them as people and as individuals.

“So the face of the enemy will become — I was going to say ‘a human face;’ it’s not quite a human face, but it’s certainly a personality that we can connect with… and also we’ll find there are differing philosophies in the Kromagg culture, so some of the Kromaggs we encounter will be more hard-edged than others; they aren’t a uniform mindset. As with any culture, there’s diversity.”

Sabrina Lloyd, according to the Dimension of Continuity, left the show during the third and fourth season hiatus after friction on the set between her and Wuhrer led her to demand that Executive Producer David Peckinpah pick between the two of them. Peckinpah chose Wuhrer — and Wade was left to occasional mentions as a breeding host for Humaggs.

The premiere airing of “Genesis” netted The Sci-Fi Channel a 2.2 rating — the highest premiere rating that the station had ever received up until that point. A 2.2 rating translates into approximately one million homes — not bad for a cable channel!

According to Marc Scott Zicree, he amassed ten pages of corrective notes for David Peckinpah’s original draft of the script.

Despite some misfires, “Genesis” is worth watching. After braving through the latter half of season three, it’s impressive to see such an about face to credible science fiction.