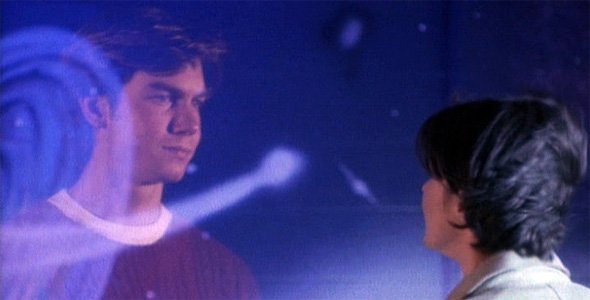 A lightning bolt strikes the vortex as Quinn enters, shifting him into an astral plane where he is essentially a ghost. If matters weren’t bad enough, the timer has been heavily damaged and the world they’ve landed on stopped advancing technology after the horrors of Hiroshima. This leads them to underground channels, where they discover Quinn’s father has been dabbling in the forbidden sciences. Quinn encounters Gillian, a troubled girl who has the ability to see and hear him. Using her as his means of communication, he discovers that his father is setting the others up so he can steal the timer for his employers, Bayside Electric. Rembrandt and Arturo fashion a daring raid on the power plant to recover the timer and Gillian talks the professor through the repairs. Michael Mallory tries to stop them, but the vortex illuminates Quinn and shakes the poor man to the core. Alas, the vortex does not open on the astral plane, and the others must make a decision of whether to leave Quinn behind.

Wade knows a little about theosophy.

On Nude World, great care is taken to hide the lady’s upper half from the cameras via a cross-hatch on her screen door, but a closer look reveals the underwire of her brasserie.

Things changed after the United States proved its might by dropping hydrogen bombs on Hiroshima and Nagasaki as a means to end the second World War. On Fifties World, the damage was actually properlyanalyzed.

In a rush to judgment, the U.S. government determined that technology would do more harm than good to society, so progression was essentially banned. While there have been some improvements over the past 50 years, at best they are baby steps in comparison to the technical wizardry available on Earth Prime.

How is technology censored? The Bureau of Anti-Technology polices the American populace looking for technology that exceeds the level of advancement that the government has allowed. Those in possession of anything technological are in violation of Article 417 of the Anti-Technology Statutes and may be arrested. However, those who lobby to repeal the technology statutes are also busy inventing devices that, once accepted by the public, can move this world into the 20th century.

With only radio and classic films as entertainment outlets, people here have turned to God, so much so that priests sign autographs after mass and technology is referred to as “the Devil’s handiwork.”

Don’t think that no television and a heightened appreciation for God are the only results of an ass-backward society — there’s also a lack of medical advancements which led to the deaths of thousands around the world. Polio, an easily treatable disease, kills every year here because no suitable vaccination has been found.

“‘Gillian of the Spirits’ was a prototypical show,” recalls Tracy Tormé. “We had a ’50s world where no one had technology and I think we pulled it off. It was done very nicely and the girl gave a really good performance. There was a lot of emotion in that show, and we also brought Quinn’s father back, which is something I had wanted to do.”

“Gillian of the Spirits” goes beyond mere alt-history and starts taking on more esoteric concepts — in this case the astral plane. Combined with a gripping storyline and a haunting sense of loss, this episode alone was the reason to keep watching the show until the big episodes came out later in the season.

Short-circuited by an ill-timed lightning strike on the vortex. The inner workings are largely unaffected except for a microchip that must be replaced by one from Arturo's watch.