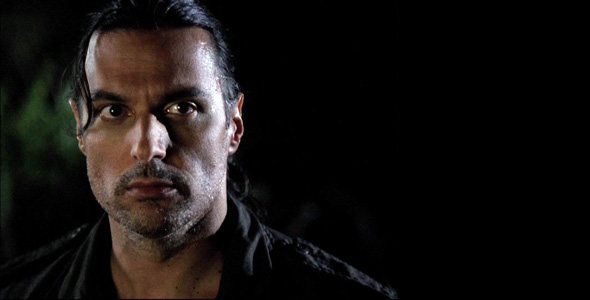 The Sliders’ timer has a problem holding the designated sliding coordinates and erroneously dumps them into the middle of the Pacific ocean. They are saved from the ocean depths by a merchant ship, populated by a band of pirates headed by Paxton. Because the timer only works within a 400 mile radius of California, the Sliders must travel back to land to slide out. Fortunately, the pirates are headed back to the mainland, and the Sliders join the marauding bandits. Paxton immediately takes a liking to Maggie and proves that he is not as ruthless as he seems. He reveals that he was wrongly accused of a crime by the Coasties, a corrupt law enforcement arm, and has vowed to seek revenge. Maggie empathizes and finds herself returning Paxton’s affection. During a pirates’ raid in San Diego, Mallory is captured by the Coasties. They threaten to kill him if the pirates do not return the merchandise they stole from the Coasties. Reluctant to give in to their demands, Paxton devises a plan that saves Mallory and helps the Sliders return to California.

Diana explains that on this world, aluminum, a durable and tensile metal that’s easily molded (hell, you’ve seen aluminum) and is primarily used for aircraft, either doesn’t exist (no) on this world or the scientists of this world don’t have the know-how to separate it from bauxite for smelting.

Because of this, aircraft are far to heavy and not fuel-efficient enough to make aviation a viable industry. People and goods rely on maritime trade to get from port to port.

The Coastal Police, run by a corrupt official named Redfield, is in charge of enforcing the waters around California, but they do so by bribing other captains under penalty of destruction of property. 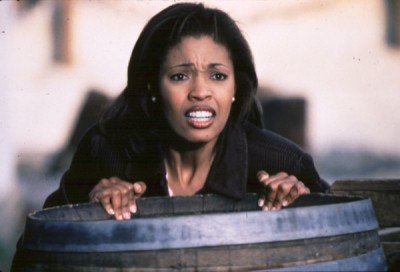 “[The episode] took sort of an interesting tack on alternate history,” says Keith Damron. “It dealt with how the development of one invention, process or material, or lack thereof, would trickle down to have major repercussions on the development of a world that may have otherwise been completely identical to our own. Subtler concepts like these were a nice departure from the more broad stroke stories that were pitched to us this year (the South wins the Civil War, etc.). We always tried to avoid those if at all possible.”

“Chris had written something with a more serious tone, preferring to avoid the 18th/19th century piratic motifs in favor of a look at more modern sea faring scoundrels,” elaborates Damron. “His vision was less Pirates of the Carribean, more really bad guys with a really big boat. In execution the episode was actually the reverse, replete with bandana clad, scurvy-looking, cutlass toting ruffians. Although it worked in the long run, the final look of the show was more caricature than character.”

Robert Floyd was quite enthused about this episode.

“About two weeks ago I was 35 feet high on a ship walking on a plank with a big machete in my back!” exclaims the actor. “I’m one of those actors who likes to say, ‘Hey let the stunt guy do it!’ They said, ‘No you’d look great!’ I’ve done more stunts than I ever thought possible: I know how to fire a machine gun, I know how to ride a motorcycle now. I’ve done quite a few fights.”

Not a stellar outing from Black, though in his defense, I’d wager most of the ridiculous fighting sequences can be pinned on director Guy Magar. After getting saddled with the static “The Unstuck Man,” he may have let things get a tad bit out of hand.

Battery drain! The timer picked up in [permalink href=26]Slide Like an Egyptian[/permalink] apparently doesn't have a regenerating power supply like the original timer, and the cell that opens the vortex is getting low on fuel. The result? Inability to lock onto a stable set of sliding coordinates, as well as flinging the Sliders out of their sliding radius and opening underwater. I guess the densitometer is on the fritz, too, because according to Rembrandt, Quinn told him there was a failsafe that gave them safe, dry landings. Bottom line: the timer's screwed up. Thankfully, Diana charges it with her PDL.