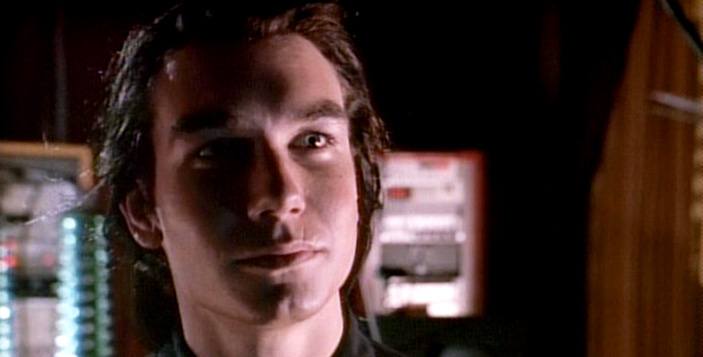 Thanks to Ryan, Quinn survives his wound but he is still in need of professional medical attention. Rembrandt accidentally puts Quinn in the hands of a witch doctor; feeling defrauded, the Sliders run out on the bill and the witch doctor puts a bounty out on Quinn’s brain. This is all perfectly normal in an America enthralled with the occult. A fortune teller reveals only the Sorcerer can save them now, and they head out on a Wizard of Oz-styled quest to reach his secluded castle of business. The Sorcerer agrees to help them, but only if they do something for him — steal blueprints of a sliding machine from Quinn’s witch doctor. It is revealed that the Sorcerer is a double of Quinn, who has become a victim of his own successes. As a thank you, he agrees to send them home. The Sorcerer is as good as his word, but the sliding window is exceedingly brief. They heartbreakingly fail to recognize their own world and continue sliding.

Despite having come to Mystic World indirectly from Lottery World, the Sliders don’t have enough to pay Dr. Xang’s $266 bill for “services rendered.” Still, it seems they do have enough to pay for one night at the Dominion Hotel and [presumably] for the fortune teller’s reading.

When Dr. Xane is examining Quinn, with Rembrandt and Arturo in attendance, the overhead boom microphone slips into the frame in the top right corner. The camera then ducks down to hide the error. 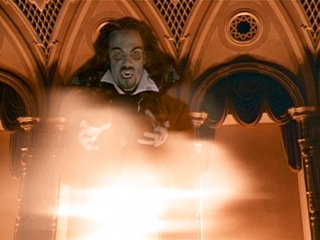 The differences in Mystic World can be summed up in one phrase: Former President Edward D. Wood, Jr.

Wood’s kooky mindset is definitely at home here on a world where the Grim Reaper can deliver a subpeona and it’s perfectly legal to demand someone’s brain as payment if they can’t plunk down cold hard cash.

Much of the world’s medicinal practices were, until a few years ago, entirely run by shamans and witch doctors (literally), who brandished elixirs and cure-alls as actual products designed to heal.

All of this changed when a new brand name came into the market. The Sorcerer brand carried a variety of alternatives to expensive poultices. These products are culled from a variety of sources — they all just happen to be from parallel universes.

You see, Quinn Mallory slid onto this world a few years ago. Quickly realizing the business potential of importing products from transdimensional trade routes, he set up the Sorceror name with the help of the enigmatic Mr. Gale and started undercutting his competition with products that actually worked.

The success of the Sorcerer line of products propelled Quinn into megawealth. The result? A monstrous gothic palace built just outside of San Francisco where all the employees of the Sorceror live. It is only accessible by the rickety Golden Gargoyle Gate Bridge and few gain audience with the head of the empire, as Quinn has secluded himself as a means of keeping the Sorceror image mystical.

“After the first season, it was really dicey as to whether we would be back,” notes Tracy Tormé. “The show was already listed as canceled by many people, which was not accurate, but we managed to come back from the dead that first season. With the second season, we were relatively confident that we would return. Our numbers, especially in the 18-49 demographics, were actually winning the night against the other networks.”

One of Tormé’s biggest obstacles to overcome when Sliders returned for its second season was resolving the cliffhanger from Luck of the Draw, in which Quinn is badly wounded as the group slides into the next world. While some fans may have been disappointed with the resolution, as seen in the teaser of “Into the Mystic”, Tormé explains the behind-the-scenes battles.

“That was a terrible experience,” he recalls. “What happened in a nutshell was the network had concluded that no one would care about the cliffhanger, because we had been off the air for a year, so let’s just pretend it didn’t happen, that we hadn’t left our main character in a pool of blood.

“Their attitude was ‘We’ve been off the air for so long no one is going to care, so let’s just say that Quinn got shot but he’s better now, and let’s pretend the other people never came through the gate with them.’ I know people find this hard to believe, but I argued with them over this for months and got the reputation for being a troublemaker or a loose cannon, because I wouldn’t take ‘no’ for an answer.”

“Then, they said maybe we could just make a reference, like, ‘It’s a good thing that bullet didn’t catch your heart!’ and move on. But again, I said, ‘Look, we’ve taken someone with us, a new slider, and Wade has a relationship with him, Quinn’s lying in a pool of blood — you have to be kidding!’ This was one area where I said, ‘I cannot give in, this is where I have to draw my line in the sand.’

“Ultimately, the compromise was, if I could answer all of it in a teaser, I could do what I wanted. I wrote a six-page funeral scene for ‘Into the Mystic’, which turns out to be a dream, and everything is tied up and explained. Then, Fox went back on a promise they made and said, ‘We can’t guarantee that “Into the Mystic” is going first, because it’s an untypical episode, so you have to take that teaser out, because it locks this episode into going first.’ I wrote a brand new teaser, with the sliders trying to order a hamburger on a world where everyone’s a lawyer, and attached that to ‘Into the Mystic.’

“Later on, Fox said, ‘We are going to run “Into the Mystic” first,’ so I said, ‘Well, then you have to let us pay off the cliffhanger.’ By this time the episode was already timed, and the scene on Lawyer World was two minutes and 39 seconds, while the original scene at the funeral was about six minutes. So, I pulled the lawyer scene to use in a later episode, and wrote two and a half minutes that would still maintain what I wanted to do.

“Given those parameters, we did pretty well, but I was sure our regular viewers would think that we just tossed it away, which I can understand, but that’s not what happened. The network maintains the right to run the shows in any sequence they want. We ended the last season on a cliffhanger with ‘Invasion,’ but there was one show they didn’t like and pushed it back, so we actually had a cliffhanger and then another episode.

“Into the Mystic” barely got to the screen intact as it was. “I liked the look of ‘Into the Mystic’ very much. One thing that was taken out was a big Wizard of Oz allegory that they kept making us cut down to the point where it was almost lost. There were also some special effects scenes — we had a flock of bats attacking the cab and the driver turning his windshield wipers on, the bats hitting the cab like locusts — which again we couldn’t afford to do properly. Ultimately, that was a show where the original script had a lot more in it, but I did like the look of that one.”

If the episode has a message, Tormé says that it is in the form of a wakeup call to the scientific community. “Up until about 100 years ago, most of the world was completely superstitious about almost everything. Now, in the past, say 50 years, mainstream science has decided it knows everything: If you don’t see it, it doesn’t exist. There are many true mysteries in our world that are not looked at by mainstream science, because the people in it are afraid to expand their horizons and are afraid of things they can’t explain. The Professor takes on that tone in this show; he serves as our voice of skepticism.

“What I’m trying to say is that, occasionally, there are things that go bump in the night in our world that are ignored rather than investigated. And now the Sliders are in a world where everybody is open to those ideas. It’s not about Satanism versus Christianity; there’s really nothing of that in it at all. It’s more a classic tongue-in-cheek look involving voodoo and sorcerers and wizards, things like that. We steered clear of any religious trappings.”

Tormé also says that Wade’s quip about her friend Sabrina being into witchcraft and the occult was a little inside joke from him to her because he feels that Sabrina Lloyd is not unlike the character she portrays.

“I would say that Sabrina and Wade are the most alike as far as the actor and the character being close together,” he says. “So a lot of Sabrina’s ’60s sensibility in astrology and mysticism has sort of come into her character since it was originally written.”

Nicholas Lea’s character, Ryan, was also originally conceived as a running character. But, obviously, things didn’t work out that way.

“Originally, Ryan was going to be in several episodes at the start of the second season and I worked out with Jacob Epstein, who was also executive producer that year, the path that Ryan would take. We had in mind three or four shows to do with him. By the fourth show, something shocking was going to happen to him.”

Fox had other ideas.

“I’m loving it,” gushes Sabrina Lloyd. “Everything is dark and dreary, with monsterish-looking people and the Grim Reaper serving people subpoenas. I’ve been having a blast. We get to walk on air in one scene, which is really cool. And I got to do the seduction scene, which is really exciting because Wade has never done anything like that. This is my favorite episode [of the new season] so far.”

“My role in this episode is, uh…well, I’m there; I’m certainly there,” says John Rhys-Davies impishly. “I don’t see myself as a vehicle for the plot so much as… sort of walking furniture. It’s a very special episode written by the remarkable producer, writer and originator of our show, Mr. Tracy Tormé. And I’m sure I have a function.”

“We’re going to a black magic world where voodoo and potions run society and have made people slaves to the occult,” explains Jerry O’Connell. “It’s a real spooky, Gothic sort of episode. Within that, it’s a Wizard of Oz spoof. The four of us meet a sorcerer who’s not the apparition we have been looking at, but a human being. My parallel world counterpart is the Oz character, the guy who’s hiding behind the apparition. So I get to play a nice, Frank Morgan-esque character.”

The parallels between this episode and “The Wizard of Oz” don’t stop with the “We’re off to see the Wizard” storyline. Tormé named Mr. Gale after Dorothy herself, whose last name in the film was also Gale.

Did the four really return to their true home at episode’s end?

“[At] the ending of “Into the Mystic” the Sliders did, indeed, return — albeit briefly — to their Earth Prime,” Tormé says.

The Dr. Xang character was originally written to be an Oriental, Dr. Wu.

Maybe it’s nostalgia — “Into the Mystic” is the first episode of “Sliders” I watched from start to finish — but today I enjoy this episode every time I see it.

The Sorcerer does something to it that lets it home in on Earth Prime, but after that it returns to its normal operation.